Stretched along the long wall of Old City’s Power Plant Basement, Theatre Confetti’s set for EDITH CAN SHOOT THINGS AND HIT THEM evokes the emptiness and expanse of the desolate Midwest setting. Twelve-year old Edith (Bi Jean Ngo) sits in a barn and tells Fergie, her stuffed frog, about life with 20 parents. 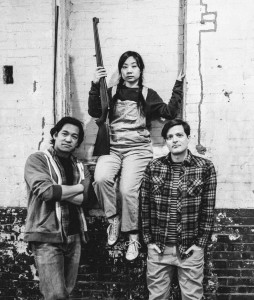 Playwright A. Rey Pamatmat has created a thoughtful coming of age story: Edith, Kenny, and Benji struggle to find themselves and their place in the world, and these are often at odds. Their characters are fully formed: Filipino and gay, without being FILIPINO and GAY. The adolescent issues they grapple do not end with adulthood;  the father’s absence (a somewhat tiring plot device)  is a totem for more existential absences.

A saccharine high school relationship does not gain the poignancy Pamatmat seeks just because it is homosexual, but it does engender social condemnation. Benji must rebel against authority figures Kenny lacks. Edith learns that her ability to “shoot things and hit them” will not win the safety she craves.

In movement and tone, the three talented actors convincingly inhabit their young characters. Aaron Cromie’s tender direction plays up the emotion and childlike earnestness at the expense of some of the script’s darker undertones. As a true-life drama, the play loses some steam in the explicative second act, but remains a touching play with depth and knowing humor.

EDITH CAN SHOOT THINGS AND HIT THEM
by A. Rey Pamatmat
March 8-March 24, 2013
theatreconfetti.com