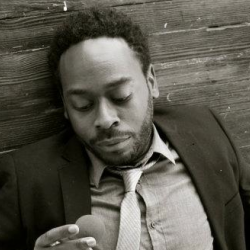 The world premiere of THE MOST SPECTACULARLY LAMENTABLE TRIAL OF MIZ MARTHA WASHINGTON hit Philadelphia with full force. The play by Barrymore award-winner James Ijames certainly is filled with humor and hilarity, but each utterance almost always freezes one’s laughter mid-stream when the playfulness turns into eruptions of anger and violence, leading viewers into unexplored territory.

“You will be broken and put back together again,” as one theatregoer commented on Facebook.

Given the explosive nature of this extraordinary play, I thought it important to talk to the playwright directly.

Henrik Eger: The theatre critics in Philadelphia have written great reviews of your play, as have a lot of theatregoers who left messages on Facebook. Quite often, critics get a bad rap for not doing justice to a play and a production. What did you think of the various reviews that have come in?

James Ijames: This is a complicated question, I think. I have loved the reviews for this show and have felt very moved by the outpouring of support on Facebook. I’m excited that the heart of what I wanted to do with the play is shining through and that the reviews, in addition to celebrating the production, also acknowledge the writing.

HE: Did you ever experience racial stereotyping or discrimination in your own life? Or would you say that your play was perhaps impacted more by a collective feeling of having to stand up to and voice the terrible wrongs of the past?

JI: I do feel a sense of rebellion in my work. Fundamentally, I wanted to say something about America’s neglect of addressing or even acknowledging its ongoing race problem.

Personally, I move through life as a black man without really considering how that affects anyone else. If someone sees me as “just a black guy,” I’m not really aware of it, because my self-image is larger than that.

My relationship to blatant racism in the way that my mother or grandmother may have experienced it is different. It’s more subtle. It’s battling privilege and assumptions more than white sheets and police dogs. I deal with the smaller micro aggressions, which are a different kind of violence, but are violent nonetheless.

HE: In The Whipping Man at The Arden Theatre, you played one of two slaves in Virginia, debating how to handle the Jewish plantation owner who fought the North, and was now so badly crippled that he could not have survived without his slaves.

Did that play by Matthew Lopez inspire you to write about Martha Washington, who relies for her survival on the goodness of the captives on her estate?

JI: The Whipping Man is about survival and transition. It takes place after slavery has ended, though recently, and John and Simon are exploring their newfound emancipation. My play is about slaves acquiring agency while still in slavery, which is a story we don’t typically hear. I’m not sure I thought much about The Whipping Man while writing this play.

HE: You thanked many of your professional supporters publicly for their help and advice in a most charming way: “I want to show some love to the midwives of this play. It could not have happened without them.” What input on your play did you receive from these theatre professionals who became friends and supporters of your work?

JI: Paul Meshejian is a miracle. What he does with PlayPenn is so important to the American theatre. His taste is impeccable, and he has created a development format that really allows a play and a playwright to grow. I can’t thank him enough for including my play in the festival last summer.

He also gave me the gift of having Dr. Michele Volansky dramaturg my play. She is an amazing dramaturg and knows how to make a play better and stronger. She knows the right questions to ask a playwright to ignite inspiration. Sometimes she would say only a few words to me that would result in entirely new scenes.

Niegel Smith helped me find the style of the play and make it more theatrical. The title of the play is in large part from my collaboration with Niegel. He is great at making the work more dangerous, pushing me to think in terms of emotion and scale colliding. Big emotions require a large scale of text, longer thoughts, and more poetic thoughts. He taught me that. He also helped me find my voice. I am forever in his debt.

I was also given an amazing cast, some of whom are in the current production (Melanye Finnister, Steven Wright, and Taysha Canales). They understood the process of play development and went with whatever I threw at them.

Q: Your script shows the most detailed stage directions I have ever seen in any script. Some of them even look like mini poems in the making; others show detailed accounts of the inner workings of the characters—not just physical actions. Example:

“ . . . She becomes possessed. The ritual of bringing her into the fold has worked. She dances with abandon! She is free. She focuses on the movements. Gives in to the sounds. The song. Sings along . . .”

How much freedom do your detailed stage directions actually give a director? How did that collaboration work?

JI: My stage directions are only meant to suggest a mood or a feeling of a scene. I want every director who approaches the play to find their own take on the play.

I love [director] Ed Sobel like a father. He is very much someone who has invested in me as an actor and a playwright. I trust him completely. Ed would call and ask me what I thought about something he was going to try and I would say “Go for it.”

I was not in rehearsal very much in the process so I really had to trust Ed’s choices, which was easy, because he knows how to work on new plays. He’s developed and directed dozens of new plays. A lot of this collaboration was simply allowing Ed to take the wheel.

HE: Is this the final version of your play, or are you tempted to develop the script further?

JI: The play has changed on my computer even from what is being performed now on stage. I think plays are always evolving. We cut Shakespeare. We adapt Chekhov. In my opinion, the play is never completely frozen.

HE: What are your hopes for audiences attending this production?

JI: I want the audience to have a great time, but I also want them to walk away thinking and talking. I want them to be energized to make some change in their lives and in their society. I hope that the play still entertains, but my main focus is not to make people feel good, but to make them think.

HE: I was in awe of the cast, from the extraordinary Nancy Boykin as Martha Washington to the slaves, who morphed back and forth into different personas, human beings torn by allegiance and rebellion: Jaylene Clark Owens, Darryl Gene Daughtry, Jr, Aaron Bell, and the actors from the PlayPenn reading who also appeared in the world premiere.

The intriguing compositions by Daniel Perelstein connected the past with the present. Marie Anne Chiment greatly added to the visual impact of the play by transforming stage directions like these into fantastic outfits:

Even now, I am haunted by one of the most symbolic parts of the play: the scenic and lighting design by Thom Weaver, director of the Flashpoint Theatre, who allowed us to see the dying slave owner and the rebellious slaves as large silhouettes in black and white, filling the screen—subtly illuminating a play that most likely will travel all over the U.S. and cast long shadows on the collective conscience of America.

You can see THE MOST SPECTACULARLY LAMENTABLE TRIAL OF MIZ MARTHA WASHINGTON at The Off-Broad Street Theater, 1636 Sansom St. June 11-29, 2014. flashpointtheatre.org/