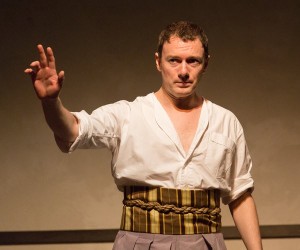 You may have seen the Lantern Theater Company’s JULIUS CAESAR, which recast Shakespeare’s political tragedy in Feudal Japan. You may also have seen the open letter that local playwright and performer Makoto Hirano hand-delivered to The Lantern on “How to Stage Your Show Without Being Super Racist,” which he signed “Makoto Hirano, Dance-theatre artist, actual Japanese person, and actual Samurai descendent,” reposted on Phindie with Hirano’s consent.

The issue is obviously a vital one to our arts scene. With the goal of theater moving more and more towards creating a community among artists and audiences alike, cultural understanding is becoming, in a way, crucial to the success of any project. Phindie editor-in-chief Chris Munden asked Hirano some questions to follow up on the “friendly” letter and elucidate what the underlying problems might be.

Phindie: I’m English and I regularly see productions set in England without English actors. There are often Shakespeare productions set in European countries or parts of the US without actors of that national or regional heritage. What makes it particularly racist to set a play in Japan without Japanese or Japanese American actors?
Makoto Hirano: I can’t answer for all of the productions in history. To some degree, it’s case-by-case I suppose.

I can say however, that Asian actors are regularly considered secondary, and we are always forced in this culture to see through the eyes of white men (sometimes portraying Asian men). The deep level of invisibility is the thing I am ultimately pointing out, and the fact that this topic is met with so many questions (from you and many others) reiterates to me just how invisible we actually still are.

Phindie: Would there be a way to set a play in feudal Japan without Japanese actors without it being super racist? How? or Why not?
MH: Of course! Imagine 7 white people just arrived on a Japanese beach, it’s 1600 AD, and it’s the story of their experience. In Japan. Being white. Put Kreager, Sobelle, Delaney, and Dibble on Interact’s stage and I would totally go see that.

Phindie: I wrote a review of this play and failed to pick up on the racist possibilities. Were you disappointed by the critical response to the play?
MH: Yes. Every critic that reviewed the show mentioned the Japanese thing but seemed to only skim the surface. I was surprised that no one went any deeper with that. And then my friend said “but they’re all white, how could they know?” And that just blew my mind. He was joking a little, but I got what he meant. In some ways, THIS is the exact thing that I am interested in talking about. Not Asians vs. White, or “colorblind” casting or whatever. I am interested in bringing to light that this whole thing is (to me) less about race/ethnicity, and more about the inability to notice when the “other” perspective isn’t being considered. Privilege does that. Makes it tough to see. That to me is harder to work through than all the other stuff…

Phindie: Apart from the super racism, what did you think of the production?
MH: My friends are awesome actors.

Phindie: Have you received a response from the Lantern?
MH: Yes. Charles [McMahon, Lantern’s artistic director] and I have met and talked. We are creating our joint response soon.