Published by The Dance Journal. Reprinted by kind permission

The audience was migrated from the second floor community room in Neighborhood House up a back stairwell and through door of the theater space, where, just inside, dancers Melissa Krodman and Kelly Bond, were running in place, etched in a slashing shaft of light. Like dual metronomes in unison, they bounded through each foot fall, their arms swinging like hammers and shifts in the footwork marking points in space to illustrate, up close, how in sync they are. They each have a stoic, even robotic gaze, yet their physical chemistry was palpable. The running sequence, gave way to anaerobic star leaps and repetitious sequences might have been more cloying on a regular stage setting, but the theatrical elements used in Colony, hypnotically, on the senses. 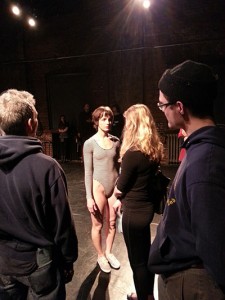 This gritty duet of aerobic endurance invites a intrusion of their dance space as a performer’s eminent domain. A key element in Colony relies, it seems, on the audience being reflective  as they construct and breakaway barriers of personal space. This audience was game

Repetition in dance is something that can not only bore and agitate, but can deflate a piece completely.   Krodman and Bond’s mirror movements were flawless, and continued to impress, but didn’t completely halt at least one mind from wandering to thinking that the duo’s dramatic profile recalled the 60s Ingmar Bergman film, Persona, or moments of hyper-slow movement was as masterfully mannered as Japanese Butoh.

In moments they had us under their power, or was it the bold stripes on their singlets, working like a psychiatrist’s swing wristwatch. But the physical reality of their endurance is also present in the beads of sweat glistening on their backs.

Incorporating isometrics, mime, rhythmic dancing they moved their way through the crowd with a variety of repeating phrases and transitioning by inching their way through the crowd in patterns like matadors circling for the kill. Side by side they moves their arms counterclockwise, the difficulty in one being one tempo rotation and the other slower, like a cartoon clock going in reverse.  They conclude this with bopping their heads ala 80s Danceteria.

To further confound, Bond and Krodman threw in red-herrings, like singing the  line ‘…And nobody else but you’  instantly wanting to hear Marilyn Monroe purring the preceding line “I want to be loved by you,”  Later they sang a variation from ‘One’ from a Chorus Line “we are singular sensations”, but these cultural references read as non-sequiturs or maybe just musical-theater tourettes.

Even when they weren’t facing each other, you marveled at how they mapped the room, with unison movement, as people milled about. 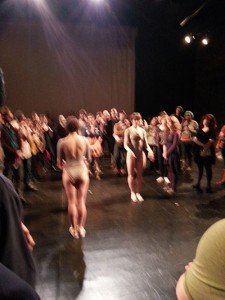 The audience played their part, Bond going up to a man and whispering “I’m in love with you” as they look longingly at each other, like an outtake from Antonioni’s erotic film ‘A Man and A Woman.  (full disclosure) – in one sequence Bond and Krodman had me locked in a dance stare-down as I inadvertently stood just a foot away from them as they executed a series of jabbing and chopping arm movements- baring forcing myself to avert my eyes to adjust to their lazar gazes. (On a more personal note- for me- this passage turned into a completely existentially sensual experience, even if I did momentarily fantasize them breaking into the full Marilyn number.

Krodman and Bond intensity of their accumulating movement engulfed the room with awareness of everyone’s presence. The process didn’t collapse the purely dance physical aspect, they end up very close together back at the door, almost joined in a conjoined motion that they would keep up as long as we stayed in that room (I had to be informed of that). There was no chance to applaud and certainly no bows, as we went out and they just pulsed on.

Bond, based in Nashville,  is a dancer-choreographer and adjunct professor at the University of Maryland and George Washington University.  Krodman is a Philadelphia based “deviser” her bio reads of experimental dance theater.  Colony is not a concept that will not be to everyone’s taste, but on this night, Bond and Krodman’s confrontational movement worked the room. Credit also should go to the nourish lighting by Justin Rose and the concussive, but rhythmically lush, sound design by Greg Svitil. January 11, 2014, thefidget.org.