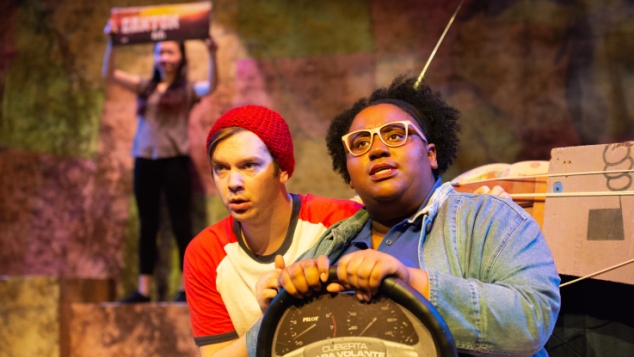 When Bob is born and immediately deserted in a White Castle restaurant bathroom, an employee gets on the PA system: “If there is anyone in the restaurant who may have left a personal item in the bathroom, would you please come to the counter at this time.”  Ah! Shades of The Importance of Being Earnest in which an infant was carelessly left in a handbag in London’s Victoria Station.

Azuka’s is a New Professionals Production, and the cast members are college students and recent grads. The cast includes Paul Harrold as Bob, and the Chorus (which isn’t really a chorus): Dan D’Albis, Frank Jimenez, Claris Park, Sabriaya Shipley. All but Paul Harrold play multiple roles in this extravagantly unlikely tale, bringing great energy and enthusiasm to the stage. Occasionally the comedy is played too archly-wink-wink when it might have been better played straight up.But on the whole they do a good job. A couple of instrumentalists playing live music would have been a welcome addition to this production, but you can’t have everything. The scenic design (Dustin L. Pettegrew) is bright with a feel of old time Americana, the America of 4-lane highways, roadside diners, and County Fairs.

So— Bob becomes accustomed to adversity when both his birth mother and the woman who raised him die. He briefly meets his father, who throws himself off a box car and into a voracious pack of wolves to save his newly discovered boy. Bob “inherits nothing but his mother’s smile and his father’s frown.” He encounters various people on his low budget travel across America, through little towns and highway rest-stops, (The William Burroughs Memorial Rest Stop is particularly memorable.)

While his journey doesn’t have the delicate, satirical quality of a Candide,it has a good-natured vibe and extraordinary coincidences, like that more refined picaresque classic. Under the direction of Michael Osinski this twisted tale moves fast and funny (although sometimes sad or a bit awkward) with rapid shifts in time and locations. It is a long show, made longer by the author’s (Peter Sinn Nachtrieb) decision to have production companies insert gratuitous, comically idiosyncratic dances performed by each chorus member. Although the show becomes too much of a good thing, and could be shorter if the lame and foolish dances were taken out, I wouldn’t do it. They’re ridiculously entertaining.

A fortune cookie had revealed to the woman who raised Bob that she would be the mother of a great, great man. Through his crazy life, shown from birth to old man, from happy to sad to happy, Bob lives and learns: He’s dirt poor. He gets rich. He loses faith and feels that he didn’t do anything great at all. His greatness was invisible. It accrued not in any grand manner, for he touched lives in incremental interactions. Through adversity, joy, Americana, and wacky heartwarming nonsense Azuka’s production of BOB affirms the pursuit of happiness.

2 hours and 15 minutes, including intermission.  Speaking of the pursuit of happiness, Azuka Theatre has a Pay What You Will policy.