“It’s all about how you ripple out, and what those vibrations can be. We are love. We are Newtown. That message says it all.”—Yolie, 26 PEBBLES 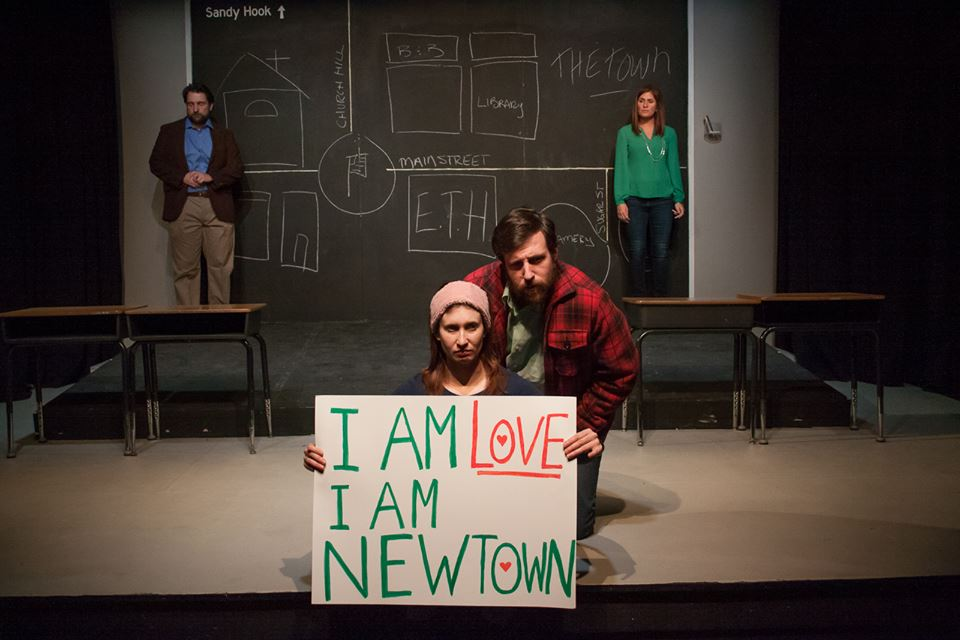 On December 14, 2012, inside the Sandy Hook Elementary School a shooter tore 26 lives from the small, peaceful New England community of Newtown, CT.  News crews occupied the town for months, amplifying the shock and horror of the town’s residents to the rest of the world. After six months and a deluge of sense dulling media coverage, Eric Ulloa was moved to travel to Newtown to see what he could actually do to help. There he was able to dowse below the surface into the hearts and minds of a town overturned by this unimaginably resounding act of violence, culling the many voices of the people he interviewed into 26 PEBBLES; a play which powerfully purveys distinct, upfront viewpoints and perceptions unlike any other medium.

Under the devoted direction of Scott R. Grumling and T. Patrick Ryan, an ensemble of six dedicated actors, Doug Cashell, Connie Giordano, Susan Mattson, Zarah Rautell, Brian Rock and Marissa Wolf portray various townspeople bearing witness to the effects, and after-effects of the shooting at Sandy Hook. Within the Allen’s Lane intimate cabaret style venue they create a tangibly touching connection to those in a state of suffering, yet surviving the ultimate nightmare. Stories of grief and faith are conveyed, testimony to trials surpassed and strength brought about by a community working together to heal and rebuild are given directly to the audience. So much so that at one point a towns-character speaking upstage to another character is redirected by that character to talk out to the house, also lending a light touch of humor.

At the beginning of the show, Jenn, mother of a six-year-old at Sandy Hook explains that “…a true sense of community comes from strangers wanting to come together for the greater good of their neighborhood. And we need more of that these days.” She then asks the name of a nearby individual seated at a table saying, “See how easy and painless that was? Now you try it. Turn to your neighbor and say “Hi!”, initiating the tone of incorporation that permeates the production, and infuses the entire theater.

Robert Bingaman’s elegantly minimalist set is primarily a classroom featuring a ramped area leading to a large blackboard at the back of the stage, cleverly repurposed desks towards the front of the stage that can be repositioned. Smaller blackboards deck the wings and there the names of those massacred are later recorded under subdued lighting and music. The main blackboard is utilized as a communication tool in illustrating the layout of the town, changes and to emphasize key points. Lighting, designed by Rachel Cline, highlights the action unfurling to great advantage, and in conjunction with Scott R. Grumling’s sound design augments the various moods of the piece to great advantage, particularly in combining these elements to depict the shattering effects of shooting juxtaposed against preexisting peace.

A superfluity of teddy bears, waves of volunteers and messages of sympathy, amity and a flood of hugs from around the country and the globe poured into Newtown. Around 63,700 teddy bears were received, so the town sent a swell of teddy bears billowing outward to others in need through the mail and via tractor trailers donated by ACE Trailer. Folks from all over were affected by this wave of agape.  According to the playwright “26 PEBBLES is not a play about the death of 20 young children and 6 adults. Those are just the circumstances…It is the story of hope and of family and of community.” How wonderful that the show can be experienced right here in the City of Brotherly Love…

In tandem with the show, an exhibit of artwork from Souls Shot will be on display at Allens Lane Theater at 601 West Allens Lane.

90 minutes with no intermission.