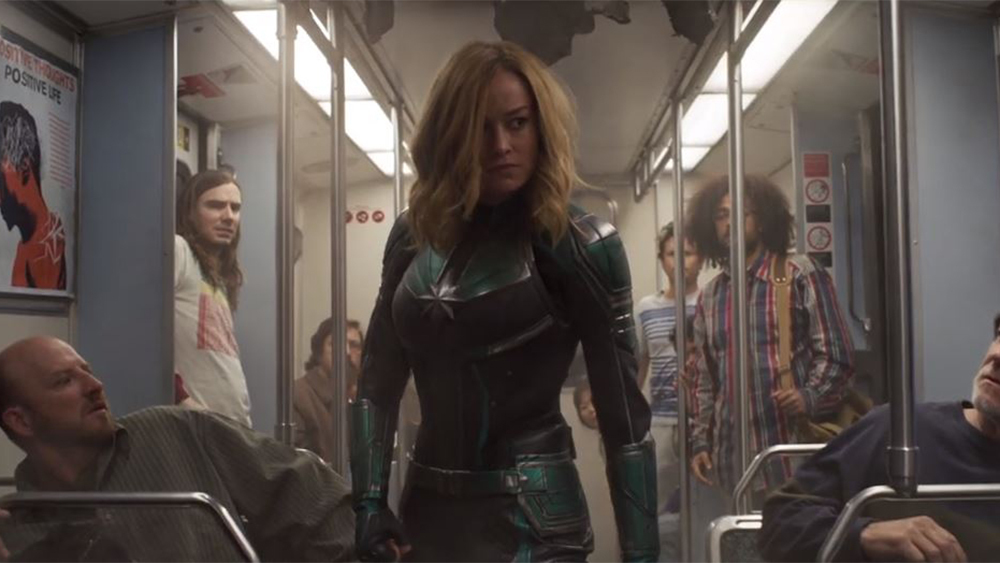 It brings me absolutely no pleasure whatsoever to report that Captain Marvel, the first female led film in the ever-growing Marvel Cinematic Universe, is a complete dud. Ranking alongside The Incredible Hulk as the low point of the franchise, what should’ve been a paean to girl power, and a decidedly upbeat answer to the dour cloud hanging over the land of superheroes post-Avengers: Infinity War, is instead a bland, by-the-numbers product of the Marvel machine with about as much panache as a Thomas Kincaid painting, only with half the color.

Really, the biggest sin committed by Captain Marvel is the fact that Disney/Marvel has more money than God, and access to literal endless filmmaking tools, and they used it to deliver what could be their weakest film to date. In the wake of Black Panther, a film that excited fans worldwide while making it very clear that black audiences are not niche audiences, Captain Marvel was teed up to do the same for women —to declare to the fanboys of the world that “comic book nerd” should no longer be a gendered term. Unfortunately, the opportunity was squandered. Hopefully this will not dissuade the pursuance of a sequel (and really, would anything at this point?) because there’s something here. Brie Larson is primed to explode as Marvel Comics’ most powerful entity, and when she does, I want to see it. But I haven’t seen it yet.

In an attempt to buck criticisms of the MCU’s “house style,” the company has made it a point to bring aboard hip, lesser known directors to tell their stories. For Captain Marvel, the studio has enlisted Anna Boden and Ryan Fleck, the duo behind the tremendous Mississippi Grind and Half-Nelson. It’s a smart move on paper, especially for an origin story. It’s important to build a strong characterization when introducing a less iconic superhero to the world of cinema, doubly so for one with an origin as convoluted as that of Carol “Captain Marvel” Danvers. On paper, the way in which such dense mythology is presented is quite clever, but on screen it fails in every way imaginable. The script, co-written by Boden and Fleck (alongside Geneva Robertson-Dworet, Nicole Perlman, and Meg LeFauve), probably reads quite well, but it just doesn’t translate to the screen. Trying to bring it down to size for this review will surely be a challenge.

But let’s give it a shot, shall we? 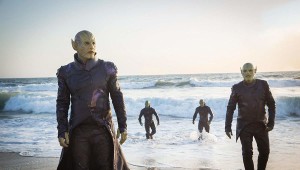 There’s a war a-brewing in the outer reaches of the galaxy. An alien civilization called the Kree is being invaded by another alien civilization called the Skrulls. Carol Danvers (Larson) is a member of an elite group of Kree soldiers led by Yon-Rogg (Jude Law, tired). During what should be a routine battle, things go terribly wrong, and Danvers finds herself held captive by the Skrulls, led by Talos (Ben Medelsohn, trying very hard). During her interrogation we see flashes of her past — a past that appears to occur on Earth, and that Danvers herself has since forgotten due to comic book reasons. After ultimately breaking free from captivity, her escape pod crashes down to Earth, and now she has to bide her time until rescue arrives, all the while avoiding a multitude of shape shifting enemies who want her dead. Did I mention that it’s 1995? Well, it’s 1995, complete with Nine Inch Nails t-shirts, Blockbuster video stores, and loading screens on CD-ROM computers. If there’s one thing I thoroughly enjoyed about Captain Marvel, it was the ways it showed how far we’ve come technologically in just two short decades. The nods to 90s culture are a lot of fun as well (a highlight being a clever posthumous Stan Lee cameo), but other than placing this before the tragic events of Infinity War, there’s really no reason for the film not to take place in present day.

Perhaps it was so that the MCU could show off their own technological advances in the form of a de-aged Nick Fury, played by Samuel L. Jackson under heavy digital makeup. I’ve got to hand it to them, he looks fantastic. Granted, Jackson seems to defy age naturally, but the work here is uncanny, without a single step into the valley. He looks EXACTLY like he did in The Negotiator so many moons ago. The same can’t be said for the de-aging of fellow MCU standby Phil Coulson (Clark Gregg), whose youthful look is a bit creepy. He still looks better than most, but his character is of such little function to the story that I wonder why they even bothered to include him. If the most recent season of True Detective can be believed — and it absolutely can — sometimes a simple hairpiece will do to bring about a youthful look. We in the audience can imagine the rest…but that would require the film to trust its audience, which Captain Marvel most certainly does not.

As the film progresses, Danvers learns more about her past, and ostensibly it’s through this self-actualization that she becomes truly powerful. She is often told by her mentor that she needs to be less emotional, and that her true strength as a warrior will come from clinical unfeeling. Naturally, as these things go, it’s her ability to feel which ends up giving her the edge. It’s a nice touch for a feminist minded superhero story (what woman hasn’t been told by some dude to stop being so emotional?), but due to the paper thin characterizations, shoddy script, and a film hell-bent on snuffing out every opportunity for Larson to shine, we are merely told what she learns without every getting to witness her actually learning it. I’d love to see how Danvers’ emotions help her succeed, but first she’s got to show any emotion at all.

There’s very little consistency to the way she is portrayed, and it often feels like Larson was given conflicting direction, sometimes in the middle of a single scene. At times she is quippy, snarky, and fun. At others she’s about as emotive as a mannequin. Larson, undoubtedly one of the greatest actors of her generation, has more than enough talent to make Captain Marvel the badass character she’s supposed to be, but she’s never given a chance to get there. And really, nor is anybody given room to perform. It’s somewhat passable for background characters to feel a little thin, especially this deep in a franchise that feels more serial than cinema, but for the titular character to be the least interesting of the bunch is downright criminal. This is a race to the closing credits, nothing more.

At least it’s interesting in a visual sense, right? 21 films and over a decade deep into the franchise, the effects would at least be improving on a steady scale, right?

Wrong! More so than any previous MCU film, Captain Marvel feels as if the bulk of it was sitting on a hard drive somewhere, waiting for a hungry filmmaker to fill in the spaces between the pre-built effects scenes and call it a movie. The larger set pieces look ripped from an entirely different project, highlighted by the fact that all of the second unit stuff looks utterly atrocious. The color palette can only be described as “gray gravy,” and the lighting is functionally non-existent. Whatever your final opinion of the film, there’s no denying that this is the shoddiest looking MCU film, hands down. I will concede that the multiplex may have messed up the projection, but even a unionized projectionist couldn’t save this one. It looks that bad. Add to that the lazy fight choreography and the abysmal action direction, and much of the film is downright nauseating to look at. They really dropped the ball here on every front. If Disney/Marvel’s aim was to make something new, they have failed miserably. Captain Marvel has all of the filmmaking issues which feel inherent to the brand, only this time it’s that much harder to forgive on account of how transcendent this film should/could have been. It breaks my heart to know that the manimals who took it upon themselves to “review bomb” the film simply because Ms. Larson wanted to open up the critic pool to be more inclusive will now think that they were right to do so. They weren’t right. Captain Marvel fails because of lazy filmmaking, not because it has a progressive leading lady at its center.

All in all, it’s the disappointment that stings most. This should have been great, and there are a lot of small pieces that hint toward what could have been: The cat is hilarious; Ben Medolsohn chews scenery from under some fantastic prosthetic make up; There are a million opportunities for witty banter and fun interplay from such an unlikely ensemble.

Yet all of it drowns under the needs of it being a marketable product. That’s what this is: a product.

Perhaps this can best be summed up by a third act fight scene in which the Captain throws down against a horde of villains to the tune of No Doubt’s “Just a Girl.” It should be a cathartic moment of pure badassery, thematically tied to the film’s feminist flavor…but it manifests as nothing more than a clever needle drop. “Good” is traded for “neat” — and “neat” is a fleeting notion.