The day after Eugene O’Neill’s trilogy MOURNING BECOMES ELECTRA premiered October 27, 1931, John Mason Brown of the New York Post wrote of the original Theater Guild production: “it is a play which towers above the scrubby output of our present-day theater as the Empire State Building soars above the skyline of Manhattan. It is an experiment in sheer, shuddering straightforward storytelling which widens the theater’s limited horizons.”

Dialing back to the origins of the American theater, Target Margin mounts O’Neill’s five-hour trilogy, which he revised six times, on the boards of the Neighborhood Playhouse, one of the first “little theaters” in New York City, built in 1915 built by two sisters, Alice and Irene Lewisohn in the famous Henry Street Settlement.

In the program, Herskovits notes: “Mourning Becomes Electra is a haunted play. It is haunted by the Mannons, the story of the United States at the end of the Civil War, and it is the story of the theater. Eugene O’Neill weaves together the influence of Greek tragedy, writing his own adaptation of Oresteia, but he also digests the American melodrama he grew up in (and his father James O’Neill performed in.) To open all these different textures of the writing, our process for this production has been unusual. Early on we carefully walked through the play and asked Where is the furniture ? When do people sit or walk or turn? Yes, O’Neill writes all of these things into the play. So we did it all. But you won’t see that play. All the language from Mourning appears sequential as written, but the primary version hovers over the actors like the ghost of a story we all shared years ago.” .

Elusive from the jump, we are only allowed to see the actors memories of O’Neill’s original play. Before we even think to enter the theater a woman in coat tails, plaid shirt, dungarees, and cowboy boots cuts through the crowd in the lobby, steps onto a platform and begins to recite Lincoln’s second Inaugural Address, originally delivered on Saturday, March 4, 1865.

It rained for weeks proceeding before that day, causing Pennsylvania Avenue to be a flooded with mud and water. Thousands of people stood in mud to hear the president speak. It rained buckets on Friday, May 5, 2017. Flood warnings haunted the tristate area. My favorite Ralph Lauren jeans were soaked as I stood listening to Mary Neufield recite the speech Lincoln delivered a mere month before he was assassinated in Ford’s Theater by a completely different actor, in a completely different theater during a completely different play.

Mary Neufueld sounds like Zeus delivering Lincoln’s address, using words like “Woe” condemning this country for the sin of slavery and Americans who were dependent upon the economy of oppression for bringing this scourge of war. 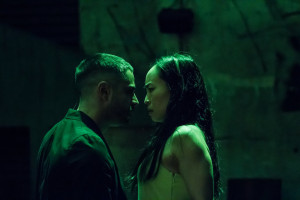 At the end of Lincoln’s address, Neufield and ushers grant us permission to enter the theater. Immediately we are greeted by the cast of ELECTRA, six actors looking directly at us, smiling, beaming, rooted to their spots, spots we can not reach because they are roped off from us, or separated by slim white chains. We are told to walk down straight down the aisle. Herskovits himself instructs me to walk down a different aisle than the men in front of me, so I go where he tells me. He unlocks a chained entrance just for me.

I make it to the other side of the aisle but only that far. The cast has us surrounded. Spouting the opening words of O’Neill’s text above our heads like invisible butter balls just out of our reach. Stephanie Weeks is luminous in an emerald green gown standing above all of us downstage right next to a roughly constructed industrial cardboard sign which reads “Lilac Bushes”. A natural beauty standing next to manufactured beauty, the product of the labor of slaves in New England 1865.

We are not standing long when, Neufeild tells us to “Giddy Up to the balcony.”

No one asks me if I want to “Giddy up to the balcony.” I am afraid of heights so I would have said “No, thank you”. Neufield speaks only in declarative sentences. I comply because I did not want to break the spell Target Margin is casting upon us.

Seconds later I am perched in the very back row of the balcony, the highest point of the entire theater. Exhilarated, facing my own fear of heights, looking down upon the imposing exterior of the Mannon house, a dominating bone-white Grecian portico thrusting itself into our sight, columns like a cold dead hand of an Anglo Saxon clapping down over the land, choking all the life that surrounds it. A skeleton which O’Neill drags into the spotlight. The skeleton in the Mannons’ closet.

The stage is black and bare for the actors to tread. Having strained to hear the actors as they race through the first part of ONeill’s epic, “The Homecoming”, I only know from glancing at the text beforehand that it is April 1865. The Civil War has just ended, slavery has been abolished now for just two years, the 13th Amendment has been established, and the men—among them Ezra Mannon, father of Lavinia Mannon—are returning home.

The actors were not even attempting to play to us in the cheap seats. At all. But this all I can grasp because this Target Margin production has been so finely constructed and re-constructed that it has its own physical language, the actors movements are sporadic and their delivery at times monotone. It is as disorienting as landing in a foreign country and hearing a new language for the first time with no translator in sight.

Sitting in the nose-bleed seats, straining to see the impressive Ivory pillars, I could think of nothing but the force labor that kept that gigantic household running; the 6-7 million Africans who were stolen from their homes and brought to these shores live out their lives in slavery. This play is about what you don’t see.

One name which is never spoken in Ezra Mannon’s house is “David Mannon.” Young Liviana (portrayed by the relentlessly authoritative Eunice Wong) was born and lived under the shadow of his curse. She has grown up bearing the weight of the disgrace which the sheer passage of time has raised to epic proportions. She reveals the secret to Seth Beckwith, a faithful family servant: “I’ve heard that he loved the Canuck nurse girl who was taking care of Father’s little sister who died, and had to marry her because she was going to have a baby; and that Grandfather put them both out of the house and then afterwards tore it down and built this one because he wouldn’t live where his brother had disgraced the family.”

As the play progresses, we were allowed to sit closer and closer to the stage, in the same fashion that we as Americans are trained to wake up and go to work all in the pursuit of the American dream. Work hard and we shall be rewarded with a gigantic house like the one we see before us with a bone-white picket fence.

Inches from the stage now, I can see Mary Nuefield as Seth plants her cowboy boots which she wore as Lincoln; now she was walking on a line, attempting to balance herself, and failing. Now drunk, jug in hand, she totters like a sailor on a slave ship, words passing through her. This is when it struck me: Ah! This is a woman haunted by furies, plagued by a past she just can’t shake, perhaps personified in the pictures or many pictures of the late Ezra Mannon hovering above the stage. I would have gone home content feeling like I saw and understood O’Neill’s epic trilogy.
Then Eunice Wong instructs us to come up onto the stage . We enter the Mannon house. We have reached our goal of the evening. I came all the way from Philadelphia and now I am on the stage of the great Neighborhood Playhouse.

At the risk of spoiling the end, I will say that when an unnamed actor takes hold of a gun and, sitting in the audience looking straight at us, extends the gun in the air and shoots. logically I can see the theatrics, yet I audibly scream “Holy shit!” My mind filled in the blanks.

Insane, I know. Look, I studied Brecht and Wooster Group, okay, but I feel like I know, really know in my bones, the value of experimental theater thanks to the folks at Target Margin.

I didn’t just see the Mannons of MOURNING BECOMES ELECTRA; I was in the fucking house right up to the final second of this five-hour production. I really don’t want to spoil anything, but I will say: .Thanks to the self proclaimed “Mic Demon”, sound designer Matthew Good, I heard the furies that thrash around that old big Mannon house loud and clear.

The curtain lowered; we are surrounded by a dozen bouquets of flowers. I am a funeral director’s daughter who grew up above an Irish American funeral home, it did not take much for me to feel as if the curtain was a casket lid closing me into the hell of my own making; aka: Trump’s America.