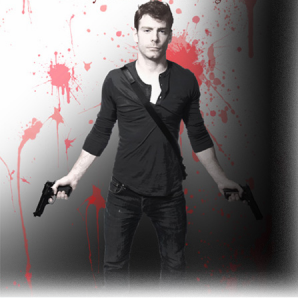 Guns blaze, blood flows (gallons of it), and the stage is littered with corpses. All this, and it’s funny too. Theatre Exile’s production of LIEUTENANT OF INISHMORE, now onstage at Plays and Players Theater, is a treat in many ways. The beautifully choreographed violence is entertainingly  gruesome not emotionally disturbing, and the horror is underpinned by a farcical humor that brings laughs galore. But  LIEUTENANT is more than just a grotesque comedy; playwright Martin McDonagh delivers a powerful political message in the most palatable of pills.

In 1993, the Northern Irish “troubles” are nearing a peaceful conclusion, but republican terrorist Mad Padraig (Paul Felder) is “at work” torturing a small-time drug dealer (Keith J. Conallen). He’s about to remove a left nipple when he gets a call telling him his “only friend for fifteen years,” Wee Thomas the feline, is sick.

Almost every character in the play is a terrorist, someone who thinks blowing up a fast food restaurant is a legitimate tool in the struggle for an “Ireland free.” With the powerful tool of humor, LIEUTENANT tears down the romantic delusions and moral blindness that underlie political violence and can cause a semi-justifiable struggle to lose all perspective and sense of proportion.

Just as terrorist wannabe Madraig (Elena Bossler) believes she can take down the Irish meat industry by blinding all the cows on Inishmore, Padraig and his erstwhile cohorts are willing to tear apart their country (not to mention those innocent lives across the Irish Sea) in order to make it “free for cats.” Surveying the bloody final scene, one of the survivors asks, “so all this terror has been for absolutely nothing?” — a lesson writ in blood across the world.

Lieutenant is directed by Matt Pfeiffer, who has fast become my favorite director on the Philly scene. In such recent shows as Arden Theatre’s Romeo and Juliet and A Moon for the Misbegotten and Exile’s Shining City, Pfeiffer has shown an ability to get the most out of even the most minor of characters — whether through intelligent casting, subtlety in direction, or a combination of the two. This is thoroughly the case in Lieutenant  — Conallen is perfect in his appearance as the pot dealer, William Zielinski is great as the one-eyed leader of a terrorist splinter group, and Bossler so embodies the sass and strength of an Irish lass she seems torn from the streets of Dublin.

Bossler’s role comes with an added poignancy. Rising Philadelphia actor Melissa Lynch was originally cast for the part. Her death in December left a hole in the local theater community. Here’s hoping she’s watching Lieutenant of Inishmore somewhere and enjoying it.

Lieutenant of Inishmore, by Martin McDonaugh
Theatre Exile at Plays and Players Theater
Through March 13
Tickets $25-$32