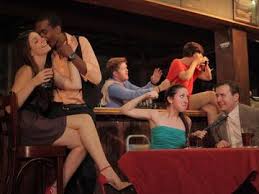 Good drinking companions hard to come by? This September, there’re at least six of them hanging out in Fairmount. The ensemble cast of the Pub Theater Company’s sketch comedy show BYE BYE LIVER: THE PHILADELPHIA DRINKING PLAY does its best to please, tending towards the broadness one normally associates with desperate parents attempting to distract increasingly disgruntled children. This is a good thing, though, because most of the audience is a few sheets to the wind by the end of the show. They sing (“Fifteen Minutes Till Whiskey Dick”), they dance (multiple instances of twerking), they make the audience drink every time one of them yells “Social!” – hell, they even stage mini game shows with audience members as contestants.

The subject matter is often old-hat, but the high spirits of the cast keep this one of the “funnerer” shows out there. The staging is loose and easy, and the actors show off their improv chops between sketches. The only boos here are actually just people yelling for more booze. Two important things to remember: make sure you have a full drink when the show begins, and stick around afterwards if you want to chat with (or buy a shot for!) your new bar buddies. [Urban Saloon] September 6-28, 2013. fringearts.ticketleap.com/bye-bye-liver-the-philadelphia-drinking-play-2013.