BalletX is opening the curtain for 2016-2017 season at the Wilma Theater tomorrow, November 16, 2016, bringing back one of their most beloved repertoire, Sunset 0639 Hours. The two main dancers, Zachary Kapeluck and Chloe Felesina, talk about their roles and their favorite moments and challenges in the ballet. 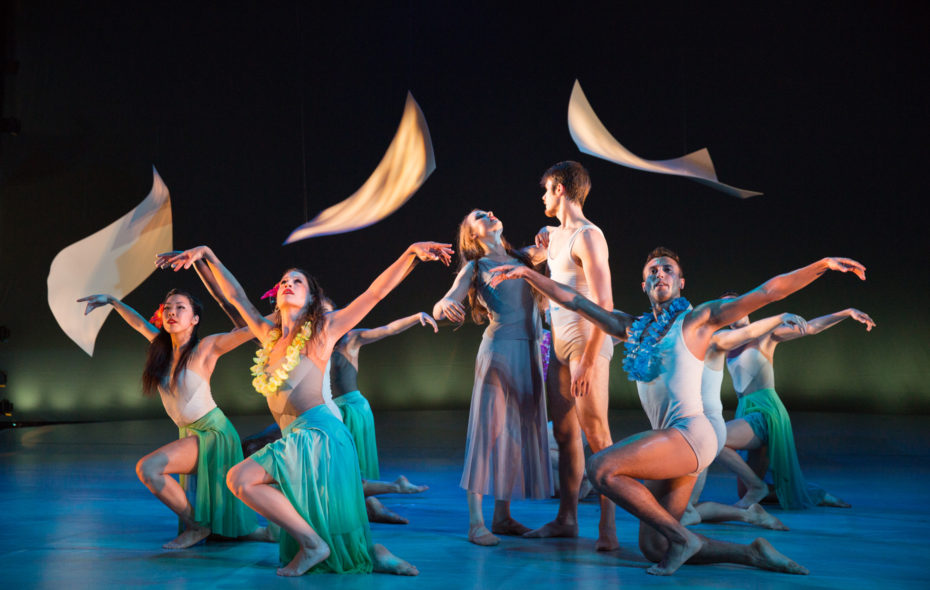 Phindie: As original cast members, you have been performing Sunset, o639 Hours for two years since the premier in 2014. Has anything changed?

Zachary Kapeluck: I don’t think its intention has changed, but the choreography has changed a little, and there are some new cast members, as some dancers have left and others have joined.

Chloe Felesina: I think we’ve all gone deeper into our characters. I am the wife of Edwin Musick (the Chief Pilot for Pan Am danced by Zachary). In the scene when he is out doing his job, I am a memory, and then I come back later as a real person after his death in the plane crash. In two years with some changes in my private life [Chloe got married, congratulations!], I have thought of my real life relationship on stage, and it gives me some new insights into my role.

Phindie: Zach, you dance the role of a historic person. How did you bring that to the stage?

Zachary: He was a very private person while he was in the public eye. I did a lot of research on his life and career. It’s tough because I am not married, so I don’t personally relate to that aspect of the character. I just tried finding a way to connect with him imagining the scope of what he would have been through. What he has done was a huge undertaking. He was living in that era, flying the Pacific, and suddenly everything just went wrong. It is very humbling to me that I get to play this role.

Chloe: The ballet is so incredible. Zach is the same person throughout the ballet, but for the rest of the dancers, we change our characters. We become a plane. We become people at a party, then birds, which is very abstractive. We go through this incredible landscape of music and physicality with various shapes, emotions and personalities, and it is very wild.

Phindie: What is your favorite scene?

Chloe: Sunset, o639 Hours captures every moment with the feeling and sense of being there. There is this scene, in which we are in a plane and we do short whistle-like breath. Then the female dancers back down in bourrée and the male dancers throw someone in the air, and he is suspended in the air for a second. It is filled with moments like that when the context and the choreography meet, and really take you somewhere. It might not be the same every time, but that is one of its strengths. It is just different every time.

Zachary: The live music by the musicians on the stage helps keep you on your toes also. They love improvisation, and they love to have fun while they are performing. That always translates in their music.  They help us go along for a different ride in every performance.

Phindie: The Philadelphia audiences love Sunset, o639 Hours and the tickets are sold out already for the most of the upcoming performances. What are your thoughts for the upcoming series?

Chloe: We know each other better now and the whole cast has tightened up as a family. That is reflected in our performances. We feel at home dancing this.

Zachary: At the same time we also have a new cast member, who is filling a spot for a dancer. Like any other form of stage arts, dance is never the same each time. After two years we just feel comfortable dancing this, but at the same time we are ready to take the next step in deepening our roles and our dance.