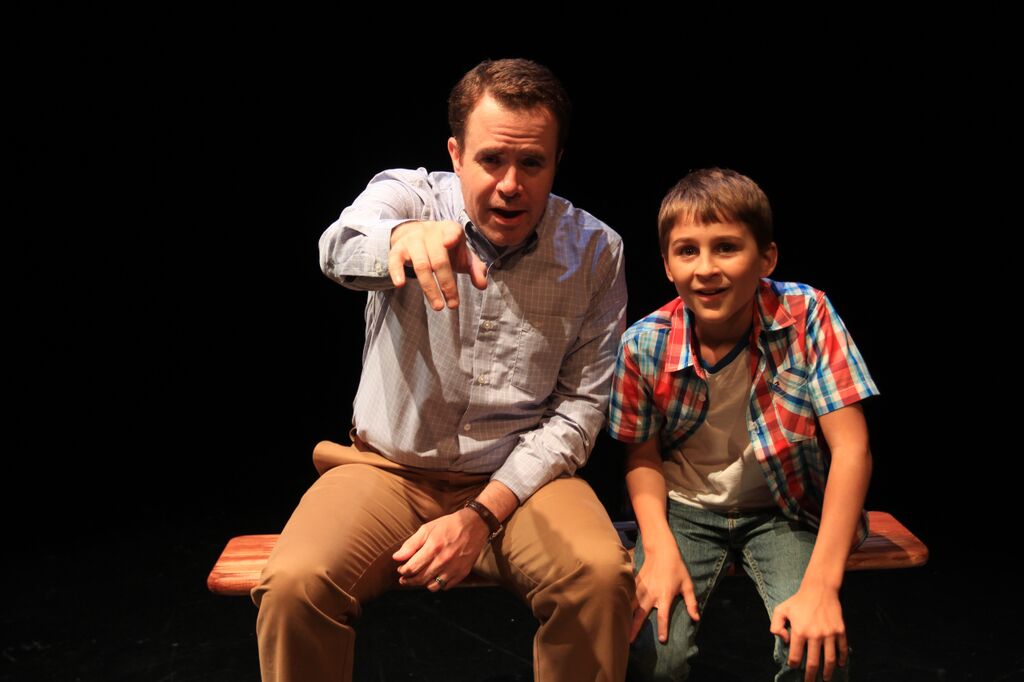 The feeling of a human soul in proximity to mine? Absolutely unacceptable. And yet, TOMMY AND ME exists, a genuine story, from a real human being, sportswriter Ray Didinger, the “Me”, playwright, three of them, an ersatz 10-year-old child-Ray (Simon Kelly), an adult form, older and yet still somehow of the past (Matt Pfeiffer), and the genuine article, sitting in the seat right in front of me.

This is not a rhetorical flourish or fabrication to spice up the review. This is a true thing that happened to me in the real life that you and I both inhabit. And now, I pass judgment on the production of his own life and childhood and spirit, told to me in a dark room behind closed doors and most troubling of all, in confidence. This is a vile predicament.

In this prison, which I once believed to be merely a distressingly positioned theater seat, and now understand to be my human existence, there is, blessedly, some light. Human words do not yet possess the quality of relief I wish to express, that Ray Didinger’s theatrical adaption of historical life, of his relationship to and with his childhood Eagles hero, Tommy McDonald (Ned Pryce as the young one, held fast in time with paired with Ray’s child-self/manifestation of joy and innocence, Tom Teti, as the old one, retired and demystified), feels, in the least, sincere. Woefully, that ol’ bugbear Biography lies in wait making rude noises and being generally disagreeable.

TOMMY AND ME grapples with that selfsame ghoul that’s been dragging Hollywood biopics into the murk for decades—the simple fact that human lives and experiences are rarely structured in such a way as to provide a satisfying narrative. They couldn’t possibly. Humans, after their most compelling stories are done, have a troubling habit of continuing to stay alive, with their foibles and ceaseless breathing, far past the point any just author(/God) would have done away with them.

At times, the play even seems aware of this trouble. Tommy McDonald’s story never ended the way it was supposed to, kicked around mediocre teams for years after championship success and retiring into obscurity. The inglorious end to his career kept him marginalized in Hall of Fame discussion. Ray, decades later, tries to fix the injustice and all the elements are there for a compelling play: there’s a concise problem engaged with a primal desire not to be forgotten, there’s a clear motivation forged of childhood devotion, there’s even a shadowy bureaucratic committee doing its best impression of an uncaring universe. I’m salivating at the very thought.

But my plate matches not my tongue’s imagination. The Hall of Fame occupies a strange, small island late in the play, years of labor condensed into minutes of brave-faced phone calls between men and over-wrought soliloquies. The front end of the play presents itself as self-perpetuating exposition, spiraling rings of trivia and statistics, and a nagging concern that perhaps the audience hasn’t yet quite got how strong Ray feels, and it lumbers and lumbers and lumbers before finally granting us some sense of conflict or purpose. The back end, after Tommy gets in (spoilers), can hardly process the accomplishment before hurrying along to establish a second conflict. Now we’re worried Tommy’s speech might be too silly and the auxiliary plot disrupts the main arc before disassembling itself without human input and with little fanfare.

TOMMY AND ME does a lot to make itself likable. Didinger’s love for McDonald is evident and provides a herculean effort towards making the play work. It’s incredibly tempting to allow yourself to be swept away in a sea of sincerity. What’s presented before us on the stage, though, is an inelegant translation of feeling, queasy and flatfooted, with a bewildering set of thematic and narrative priorities.