I went to the Philadelphia History Museum at the Atwater Kent last week on a tipoff from Mary Syndor.

This, too, is basically how Mary put it to me. What their site also said, but could have made more clear, is that Played is a changing exhibit and only focuses on one of these topics at a time. And that the current title of the exhibit, Phillies Fandemonium, meant that it would be about the insanity of Phillies fans and the hoarders who collect their promotional garbage.

I’m sure that that’s not really the focus of the exhibit–but that’s what it said to me. The 400-square-foot room in which Played in Philadelphia lives (tiny!) features, on two walls, spreads of each of ten fans who won a Philadelphia Magazine competition for the Phillies’ biggest fans, with pictures of them in their natural habitats. These people are truly nutty, the craziest being the one who named his son Chase Luke Ryan Howard Yalon.

What if this boy wants to discover the secret of marketing infinitely renewable energy to city centers? Or to cure AIDS? No, he will always be branded by athletes he’s never met and who lived in the distant past.

One wall, by way of color and background (the museum is beautifully made-up) is plastered with a cinematic image of a bandstand filled with fans. There are jerseys from two major players and an empty champaign bottle from when the team won the world cup or the ashes or whatever baseball players play for (still with the spit of the players on the rim? Come all ye mad cloning scientists/sports fans!). And in the middle of the exhibit, in two glass cases, treasures from the hordes of hoarders: magazines, dolls, McDonald’s or Wheaties toys featuring the team, pencils, etc. People who filled their living rooms and attics with red and white stripes.

“The team gives us something to unite over,” says one of the mad fans–or something like that. This Phillies memorabilia say nothing to me, but to many it must seem unimagined wonders. And the exhibit does, with items like the champaign bottle, do exactly what this museum does very well: let objects tell stories. 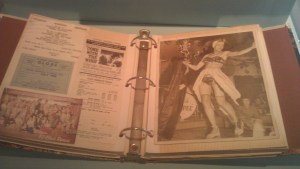 I actually did a little review on the museum for Art Attack, particularly the eclectic The Power of Objects exhibit, highlighting this relationship with objects that so spurred my imagination. Prowling the brief but well-used purlieu of the museum, I felt a bit of the magic that I’ve felt at the (much larger) British Museum.

The PHM dedicates itself to telling the story of “daily urban life” in Philadelphia. So no more weight is put on the desk of President Washington or General Meade’s gift sword than a pair of anonymous bocci balls or a ratty jewelry box brought from Ireland by an unknown woman.

No idea what is next for Played in Philadelphia, but I do hope that the curators will put some of their considerable talent into a theater exhibit sometime soon. No telling, either, when the exhibit will change. They were meant to change “every four months or so” according to an article put out in September, when they re-opened, but it has so far been ten months of Phillies fans.

That said, the PHM has found its way onto my list of unique Philly attractions enjoyable in one to two hours. It has good company there, with institutions like the Rodin Museum, the Mütter, the Magic Gardens and the perimeter of the PMA. Played in Philadelphia is a semi-permanent exhibit, launched in 2012. philadelphiahistory.org.