Rob Henry and Brian Seaman, founders of Mazeppa Productions, the newest resident musical theater company in Philadelphia, offer an oasis of entertainment in the Sahara of theater’s summer down-time with the multiple-award-winning AVENUE Q. Director Rob Henry’s experience in children’s theater pays off in the unfussy directness of this cute puppet and people show—but it’s not one for the kiddies.

The musical progresses according to traditional structure, initially laying out in song what the main characters want, and sketching the general situation. Mike Dorsey, who shines as a young guy named Princeton, searches for meaning and sings a plaintive song, “Purpose”. The company performs “It Sucks To Be Me”, and the show proceeds with big noisy numbers along with pensive ones. “There’s a Fine, Fine Line”, sensitively delivered by Angela Leone as Kate, hits the de rigueur worrisome note at the end of act one, providing a problem that will have to be addressed in act two.

AVENUE Q features old fashioned self-contained songs, but reveals its contemporary relevance by drawing only provisional conclusions. Unlike a grand-scale musical with BIG ambitions and all the answers, AVENUE Q carries its freight lightly. Puppets and monsters and well-meaning characters de-fang race and sex issues.

No well-known Philly theater veterans headline the cast or production team. The young cast and designers appear to have sprung, Athena-like from the head of Zeus—fully grown and armed to the teeth. Leads Dorsey and Leone are talents to be reckoned with. And It’s hard to take your eyes off performers like robust Lauren Elysse Fitzgerald, Bren Thomas, and slick Stephanie Walters. 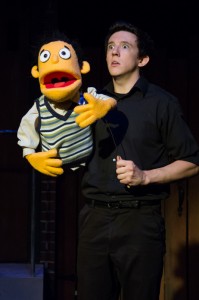 Mazeppa’s managing director and set designer Brian Seaman says, “We are a small theater company with big dreams.” With their production of AVENUE Q, this small company has created a much needed summer theater experience that’s energetic, heartfelt, and refreshingly silly. For someone like me who has never really been into puppets, it was a wonderful surprise, and a great choice to liven up a hot summer night. July 10-27, 2013. mazeppaproductions.org.

2 Replies to “AVENUE Q (Mazeppa): A puppet oasis in the summer heat”