If your favorite part of Willie Wonka and the Chocolate Factory was the creepy boat ride or if you even remember that scene with a tingle of cinematic delight right down in your nethers, then you’re definitely of the constitution to enjoy PARADISE PARK by Charles Mee. Put up by Philadelphia’s Idiopathic Ridiculopathy Consortium (“We bring good nothingness to life,” says their mission statement) at the intimate Walnut Theater’s Studio 5, PARADISE PARK presents a circus of bizarre characters and bent story lines as disparate as the rides in a carnival. The raucous characters and their absurd trajectories stand out against a dramatic structure which flows almost seamlessly from one event to the next, drawing the audience along until  they give up trying to ascribe meaning and let the ineluctable events unfold. 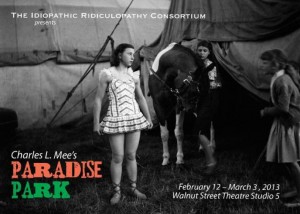 Anna Kiraly’s set was loud in color—mostly bright reds and whites—but in function was bewitchingly uncomplicated. It adopted the mercurial flow of the Charles Mee’s play into its function: with the removal or placement of a bench or two, and the shift of video projections or lighting cues, the same space becomes a forest, a dining room, a carnival ride, or a car on a highway.

Though the set was submissive to the action of the play, Mee’s setting is vital to the atmosphere the text creates. He uses the carnival—the labyrinthine, hyperactive, at times malicious Disneyland of Paradise Park—as a setting-off point for his explorations into the twin absurdities of human existence and traditional theater. It is within Kiraly’s easily-manipulated setting that Charles Mee’s text variously adopts, modifies, and scorns the habits of traditional theater to create his own dramatic form, to satirize the human struggle for meaning in art and in life, and to make some staggering statements about normality in America.

“Frankly there is such a thing as normal”

If there is a core story in Paradise Park, it is the comically awkward courtship of Billy and Ella, a romance doomed to failure. Things aren’t so grim at first; Ella leaps off of the Ship of Fools to help Billy, and the two flirt inexpertly. At their second meeting, a dance, obstacles begin to appear: Benny is terrified to even approach Ella, who in turn is too shy to do more than glance in his direction.

Somehow, through mutual determination and attraction, they manage to dance together, and to find private moments throughout the show to speak together. Much in line with a traditional comedy, obstacles continue to develop: Benny proves to be not only shy but awkward, unthreatening, and uncertain of how to get what he wants. Ella is ostensibly flirtatious, but every time they come close, we get a glimpse of some past trauma, and she lashes out at him. At one point, during a heartfelt conversation, she tells him that when she thinks of them together she imagines being caught in a terrorist attack and being put up on top of an elephant which wraps its trunk around her waist and tells her it had fallen in love with her and would never let go. Though both want romance, again and again one accidentally insults the other, until their original chemistry has almost completely cooled off.

Traditional comedy relies on the meeting of unlikely lovers. One or both of them is young, innocent, and beautiful. Between them is some obstacle which seems insurmountable but which is eventually overcome. It’s so thematic in modern storytelling that we can predict the outcome of most movies from the beginning. Mee takes this trope, but bends the archetypes until they become believable representations of our own busted mental realities.

At the prom, which closes the play, they do end up together. But it’s clear that the two of them have really gotten to know one-another, and have already made sacrifices and compromises to make their romance work.

“Well, it has a happy ending”

Billy wears a frilly dress to the prom. Every character, from the teenage girls to the aged Edgar and his puppets, shows up at the prom in a prom dress. Seeing two old men in pink dresses waltzing together put me in mind of the end of Shakespeare’s Twelfth Night for the very reason that this conclusion doesn’t make sense.

Twelfth Night has been called a “problem play”: to many, the ending is too neat, and suggests either an exasperated, deadline-crunched twisting-together of loose ends, or a subtle joke being played on a lowbrow audience. Olivia is just too human and intelligent for some to believe that she would swap her love from one twin to the other so easily, and though Malvolio is generally unlikeable, Feste still comes off as looking like either a jerk or an anarchist for justifying driving a man to near madness with the fact that he’d insulted him twice. The oddness comes from the disparity between the play’s message and our own judgements: we cannot completely forgive these characters, but the play’s action does.

Mee’s eleventh-hour unity and happy ending, however, is pitched with a knowing look: he’s sending us one last message to say that the whole play is absurd. Mee is writing for a subculture audience which is ready to question those norms, and therefore gives a solution so ridiculous that it cannot be bought. How do you create unity out of chaos, how do you bring together these characters who have nothing in common, how do you twist reality into the claustrophobic rules of the traditional comedy and its happy ending? Put everybody in a dress.

The improbable denouement is not the first element of Mee’s play which puts the viewer in mind of Shakespeare’s. Both have subplots which override the main romance. Both use the theme of the carnival to explore themes of madness, reality, illusion, love, chaos, revenge, violence, trickery, clowning, and naked human needs. Both culminate in an imbroglio which attempts to twist all of the plot lines together. Twelfth Night finale song vigorously asserts the concluding unity; in Paradise Park, it’s a dance.

Once the mercurial setting of the carnival has been established, and we’ve learned that time is not capable of being pinned down, nor place, we find the boys sitting around talking politics. The conversation is confused and bafflingly ignorant. They harangue one-another about legislation and litigation, self-sustainability and paying your dues, entitlement, the American Dream, freedom, and the desire to be a winner.

“Too much and not enough!” they cry. “Isn’t this America?” What comes out of this is not so much that they have no idea what they are talking about, but that the blunt themes which are considered American are labile, easily manipulated. More laws or less, either could be called constitutional. The very offices and individuals which are placed to expand our rights routinely restrict them. The law which expands one person’s freedom, in fact, restricts another’s.

They are interrupted by Bob, the pizza delivery guy, who says on his entrance: “And yet, I think, nonetheless / forgiveness is possible.” The interesting thing about Bob is that he’s committed a triple murder. But he, too, hopes for absolution, forgiveness, and happiness. His theory of salvation is attractive: “If I forgive myself I’m forgiven […] I’m the captain of my own ship.” Like a lot of pop, self-empowerment psychology, it’s scuttled by the main fact of the story: as he goes on, it becomes clearer and clearer that he is still unhinged, bitter and confused, and what’s more, after having murdered his family, he is now out among society, delivering pizza and getting angry and confused. And as much as he wants to return to the ranks of the normal, he is not able to forgive or to rehabilitate himself.

“I’ll meet you later, at the malt shop”

According to their mission statement, the IRC’s plays “highlight the tragedy and absurdity of living that stems from our desire for omnipotence and immortality, when our actual condition is that of impotence and mortality.”

What Mee is saying to us is that theater is at its best when it does not attempt to avoid or escape abnormality and chaos, but when, instead, it exhibits them for all to see. The messy, overlapping plot lines, the lack of a central character, the inconsistent, nebulous characterizations; while he does bring them all together in a rising action, climax and denouement, instead of trying to cover them like the conclusion of Twelfth Night and so many other comedies would, he exposes them.

In doing so, he gives us all the opportunity to see a bunch of men in dresses, which, after all, is what theater is all about. February 12 to March 3, 2013, idiopathicridiculopathyconsortium.org.

You can read the play here; in fact, you can read every play that Charles Mee’s written by following that same link, and there are a bunch of them. Because he’s such a nice guy. It’s an incredible thing that Mee’s done. By making all of his plays available to read – and encouraging artists and writers to borrow/steal his words – he is contributing to a growing worldwide culture of collaboration. And he ought to – a lot of his texts are created from other people’s words, phrases, speeches, structures.