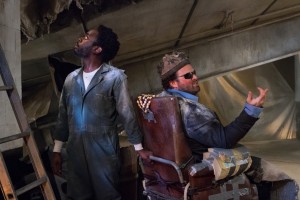 Samuel Beckett’s ENDGAME (now onstage at the Arden Theatre) is empty and confusing; the action confined, the pacing slow. For all this, it’s a great play: a humorous exploration of the meaningless and inexorable deterioration that is human existence. Crippled, stuck in a room in an apparently post-apocalyptic world, Hamm (Scott Greer) beats down his servant Clov (James Ijames) and helpless parents, as he entertains himself with his own stories. “It’s better than nothing,” he tells Clov. “Better than nothing, is it possible?” Clov asks.

The Arden’s production captures some of Beckett’s power, giving the language space for poignancy, but misses the humor and chemistry possible in Hamm and Clov’s relationship. The set feels cluttered instead of desolate, and director Edward Sobel is more interested in contemporizing the political undertones than exploring the obvious psychological overtones. It’s been too long since Philadelphia had a great Beckett production. The wait continues.
January 17-March 10, ardentheatre.org