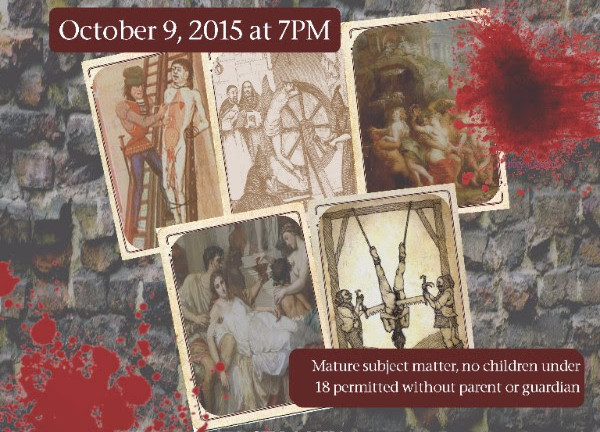 Most books which were considered sexually scandalous at the time (Lady Chatterley’s Lover, Madame Bovary, The Country Girls, Lolita) seem positively anodyne when read in the early 21st century. But though written in the late 1700s, Marquis de Sade’s novels still make for discomforting reads: virtue does not lead to good rewards, humanity has depths of darkness.

De Sade’s 120 Days of Sodom traces the stories and experiences of four prostitutes, hired to entertain wealthy aristocrats over four months of murderous debauchery. Rape, incest, torture, child abuse: the book has something for everyone. A 1975 Italian movie adaptation, Salò, captures the depravity of de Sade’s work. The film still has the power to shock, even in the age of Saw and Hostel.

And now Philadelphia playwright Josh Hitchens has produced his own theatrical adaptation of 120 Days of Sodom! His version will be performed as a staged reading at BrainSpunk Theater at the Papermill, October 9, 2015.

Hitchens previously delved into the depths of humanity with his chilling one-man show Jeffrey Dahmer: Guilty but Insane, which humanized the serial killer, thereby heightening the horror of his acts. He has also garnished acclaim for his haunting adaptation of Bram Stoker’s Dracula. Don’t expect a feel-good musical comedy with his 120 Days of Sodom. Do expect a steadily mounting terror.