I came to theater through literature: words brought to life onstage. But seeing any small amount of theater, you quickly realize that that much is communicated between the words. This, to me, is the essence of movement art: some things are better communicated wordlessly. 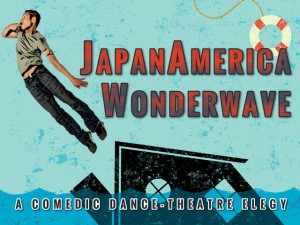 With JAPANAMERICA WONDERWAVE, Makoto Hirano and his collaborators at Team Sunshine Performance Corporation demonstrate the potentials of well-crafted dance theater. A comedic and engrossing “disaster-response mixtape”, the show illuminates how we incorporate distant tragedies and modern information-overload into our mundane daily life.

On March 11, 2011, 10 million people tuned into America’s Got Talent and a powerful tsunami struck the Japanese coast, killing nearly 20,000 people. WONDEREWAVE is Hirano’s attempt, as an American of Japanese descent, to come to terms with such dichotomies. Switching characters between “Makoto” and a fictitious reality show contestant dancer, Charlie, Hirano weaves a complex tapestry of discordant poignancy.

Designer Oona Curley’s deceptively adaptable set becomes a template on which Charlie moves stiffly through quotidian routine, records a YouTube video (an extremely well-observed onstage representation of digital communication), and speaks tonelessly to adoring Japanese fans. With “Makoto”, who is sometimes played by other people in the four-person cast, we see a man affected by events across the world (he never removes his gaze from a model of the waterlogged land), but unable to process them.

Hirano uses dance—whether synchronized musical numbers or stylized represtational movements—not as interludes but as powerful tools of communication. The selective presence of text and spoken words is striking, most especially in a scene which sees a slew of words come out of the TV, first everyday (“closet”) then evocative (“shooter”, “first-grade”, “wave”, “bombing”). Some things are better expressed wordlessly; some words can never be understood. Makoto tries to place the note cards in a coherent order, rearranges them, then places them behind household objects. In this way—slowly, blindly—do the human tragedies on our computer screens, TV screens, phone screens, become part of our everyday lives. April 26 to May 12, 2013, teamsunshineperfomance.com