This is the first time in fifteen consecutive years that I am not presenting in the Fringe Festival, a “city-wide celebration of innovation and creativity in contemporary performance” which occurs in Philadelphia each year for two weeks in September. Almost a thousand performances, including national and international performances curated by FringeArts, and works that are produced by independent artists are set to play out in a variety of venues, large and small, throughout the city. While almost every genre of the performing arts is represented, dance has always held a significant portion of the independent presentations.

I now find myself missing the process but now for the first time being able to step back and objectively examine the real costs of self-producing at FringeArts. The data presented in this article is from a random sample of self-producing dance artists and companies. Because of the size of the sample (8 participants responding), it may not fully depict the broader range of companies that are self-producing. However, it does begin to provide some insights in to the process of self-producing, which the Philadelphia dance community heavily relies upon given the lack of funding in this sector of the arts.

There were wide variations in actual expenses to self-producing companies based on venue selected, number of days the show will run, whether company members are paid or not and amounts spent on marketing as well as additional support labor such as lighting or sound technicians, box office staff, etc.

All groups surveyed had two main fixed costs. The first was the Fringe participation fee, which is $350. The fee covers participation, show listing and image in the festival guide, administrative, marketing, PR and box office support, customized sandwich board for the venue, invite-only networking events, artists workshops and discount rush passes to fringe performances. Offhand, this seems like quite a bargain, but I have seen festival fees rise over the years from as little as $75 to the current rate. In addition, Fringe Artists must also purchase general liability insurance to participate. All of the groups surveyed did not have their own insurance and needed to opt-in to this added expense. While insurance rates are based on the number of actual performances, all of our groups had under five shows and thus had a fixed rate of $120. So absolute minimum entry level to Fringe starts at a fixed rate of $470, which for many struggling artists can be quite prohibitive. 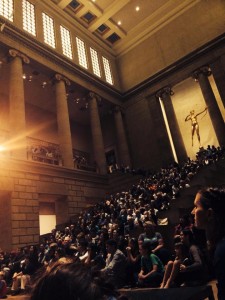 The next major expense that artists will encounter is the cost of the venue. Here is where there is a huge fluctuation in costs. For those using non-traditional venues, rates varied from $200 to $600. More traditional venues ranged from $600 – $1800 on average. Other variations besides the nature of the space, as well as audience size that could be accommodated, were the number of days/performances. Some rental fees also included the use of sound and lighting with additional charges for an on staff technician. In averaging the survey results, the average venue cost was determined at $735. The average seating capacity across venues was an audience of 55 members, with a range of 20 to 225 seats.

Marketing expenses for printing flyers and postcards, to creating programs for the show and even paid advertising was another expense category. On average, the companies surveyed spent $410 in other marketing expenses for their productions. This is really quite minimal as most will heavily rely on word of mouth and social media to promote their shows.

Salaries to dancers as well as supportive staff had huge variations depending on the pay model selected. Some companies expected all performers and staff to work “pro bono” as part of the “fringe experience”. Others had inventive revenue sharing models based on a percentage of ticket sales, which quite frankly, if their shows completely sell out at full ticket price, would only net the performers an average of $30-40 each. And a few of the companies surveyed were paying their dancers and staff a fixed rate for performance, but in all of the cases did not pay for rehearsal time. Crunching the numbers, the average expenses for dancer salaries was $650 and another $425 for production staff, sound or lighting technicians, but also administrative staff. All company directors responded that they did not budget in for their own fee and would simply take what was left of the pot when all was said and done. The average fee to the individual dancer was $75, significantly below any pay scale for the number of hours required.

So to summarize our averages on the expense side of self-producing:

Here again there was a wide range of reported “potential income” by companies. These variations are accounted for by the fact that they are estimates given the shows will not occur until September. As previously noted, average seating capacity across venues was an audience of 55 members. The average ticket price varied from $10 to $20 dollars taking in to account both full price as well as discounted student rates. The average number of shows being presented by the artists surveyed was 2. Based on this, the average fringe show was being seen by 110 audience members. Calculating that the house has completely sold out (not always the case) and at the full price and highest rate (also not always the case), the average potential income from ticket sales was $2200. The reality is that this number tends to be much lower and based on a previous year informal survey, income would average around $1600.

Additional revenue streams listed indicated that many of the companies were looking towards crowd funding (Kickstarter/Indigogo) to generate revenue to pay dancers or for the company itself. Only two companies looked towards donations from friends or family. Only one company listed ad sales for their program book, which basically was to cover the cost of printing and some marketing expenses.

Even anticipating the best results for their performances, a sellout crowd at full price, all company directors responded that they anticipated just breaking even or taking a loss. In fact, the emphasis seemed to be more on minimizing their losses as opposed to trying to actually generate a profit.

As typical with self-producing companies, the revenue gap is made up out of pocket or funded through personal income generated from their “other job”. Several directors responded that if there was any revenue stream from FringeArts that they would be putting it towards future productions or perhaps paying their dancers a bit more from the negotiated rates.

Additional comments from respondents indicated that many of them had not formally calculated their budgets or really looked at the numbers in deciding to participate in the Fringe Festival. In fact, they indicated that this survey forced them for the first time to really consider the costs associated with production.

So what then are the benefits of participating in the Fringe, if the norm for companies tends to be a break even or loss? What are the benefits for the dancers, who are often spending hours in no-pay rehearsals and only receiving very minimum wages for their actual performance time?

Across the board, the two main reasons given in our surveys were the possibility of developing new audiences and gaining exposure. Several surveys conducted by PhiladelphiaDANCE.org in 2013 and 2014, found that most dance audiences, 89% in fact, were made up of family and friends. Only 11% were “new audiences” responding to an advertisement, media write up or word of mouth. Crunching back over the numbers for only self-produced, fringe dance performances, the new audience acquisition rates fall to under 8% on average. Going back to our average audience of 55 people per show, we are speaking about 4.4 new audience members per show. How many of them become repeat customers is yet another unanswered question.

In addressing the benefit of “exposure”, I would prefer to call it “brand affiliation”. Fringe is a world-wide phenomenon with strong brand recognition both in and out of the arts community. Philadelphia Fringe Festival is no exception to this! So perhaps the benefit here for the company is to be able to say that they have “presented their work at Fringe”and for the individual dancer to be able to add to their resume “danced at the Philadelphia Fringe Festival”.

While not indicated by the respondents, I would add from personal experience, that FringeArts also provides the impetus for the creation of new work for the season. For the company directors, who often spend long hours without compensation and little hope of a financial return, this is perhaps a more critical factor as to why so many participate each year. As one director in our anonymous survey stated, “it’s all about getting the work out there, whether at FringeArts or self-producing during other times of the year”.

6 Replies to “The Cost of Self-Producing in the Fringe”