For five years now, Quince Productions has offered a summer theater festival of full productions, one-night performances, and staged readings. It’s called GayFest!, but the festival’s appeal goes beyond the LGBT community. The shows feature gay characters, but they are no more “gay plays” than plays featuring straight characters are “straight plays”.

GayFest! 2015 opens with At the Flash (August 7-9), written by Sean Chandler and David Leeper and featuring L.A.-based Leeper in all five roles.  As the owner of gay bar “The Flash” is preparing to reopen it, eclectic customers (a closeted married man, a drag queen, a club kid, a lesbian activist) trace fifty years of the bar’s (and community’s) history. Pre- and post-show receptions sandwich the opening night (August 7) performance.

Other mainstage performances include The Secretaries (August 9-22) by Maureen Angelos, Babs Davy, Dominique Dibble, Peg Healey, and 2015 double Tony winner Lisa Kron (The Five Lesbian Brothers), about a gang of murderous lesbian secretaries at a lumber mill;  White Plains (August 11-22) by Michael Perlman, about an Academy Award-winning filmmaker who calls out the man who bullied his friend in high school and drove him to suicide; and Mother Tongue (August 13-21) by FJ Hartland, a comic romance about letting go of the past and letting love happen.

Quince also presents staged readings of new plays as well as six one-time performances—evenings devoted to a wild variety of presentations showcasing the diversity within the LGBT community. A highlight is Hot A$$ Mess: A Gay Storytelling Extravaganza, which follows storyteller Steven Rascon on his journey from the West Coast to Philadelphia. Others to look out for are gay country/folk singer-songwriter Zach Ryan and a workshop of My Favorite Husbands, a lesbian play directly from New York’s Fresh Fruit Festival. Look for a full range of coverage on Phindie’s GayFest! page.

Check out the full schedule: 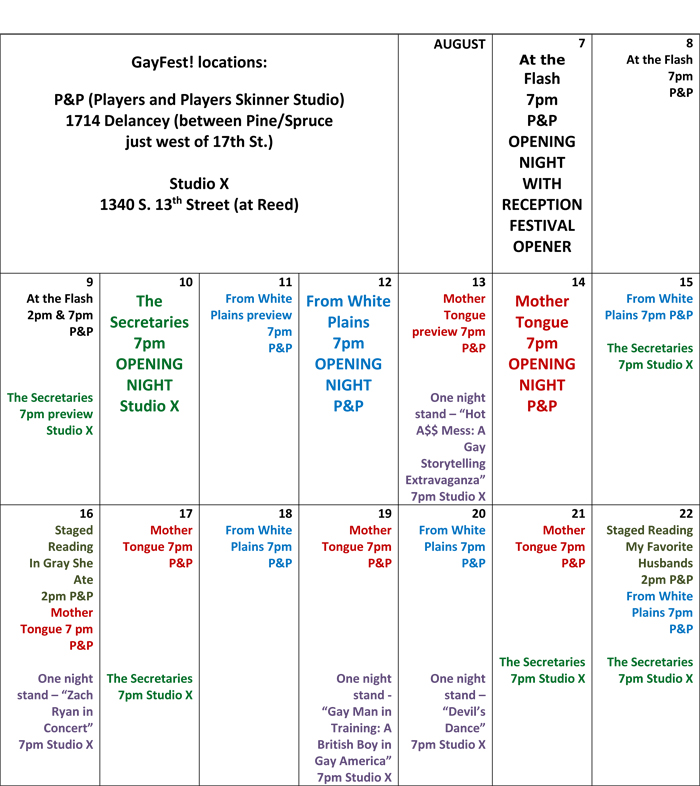