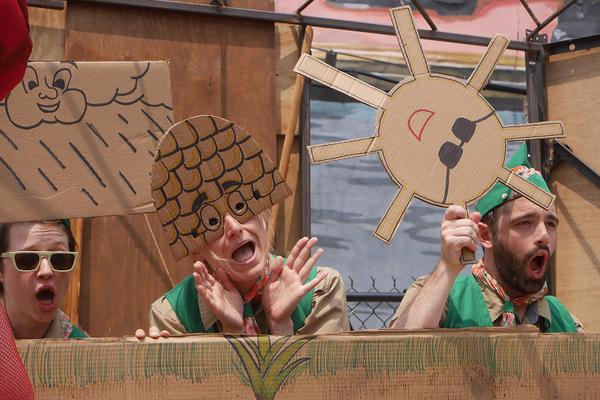 The corn cob headdress Mary Tuomanen peeks through as she plays an indestructible GMO ear of corn acting as the emcee of pro-green cabaret, and the onion peel dome that Aaron Bell dons as one of a trio of harmonizing organic veggies, bruit the wit and talent of Bearded Ladies Cabaret costumer Rebecca Kanach, who character for character, sewed up something worth seeing and savoring.

The killer bees outfits with their especially large stingers worn by the versatile John Jarboe and Kate Raines also amuse grandly as Bearded Ladies launch a two-pronged attack, mostly lampooning folks who don’t pay too much regard to the environment but sometimes turning their satire on people who go too far in advertising their green goodness.

Then there are times you don’t where Bearded Ladies stand, but you tend to enjoy the joke, as when Raines, playing Fayth Hill, the misspelling intentional, announces she and husband Tim McGraw are vegans who will starve if pesticides continue to kill off significant numbers of birds and bees that will, naturally, not be here to pollinate plants that will, naturally, diminish in number and create food shortages and vegetable extinction that will preclude Hill and McGraw’s having the leafy, pulpy, tuberous food they prefer to eat. Water shortages in California also get a mention.

BITTER HOMES AND GARDENS, as the Bearded Ladies call their latest show, written by Jarboe and Tuomanen, is planted full of good ideas, some of which germinate, some of which reach farther than they can comically travel, and some of which die on the vine of easy political correctness.

It makes little difference If every sketch and comment hits its satirical mark. The effort put out by the Bearded Ladies cast is always bright enough to keep their show a delight and give you something to laugh at or think about.

Jarboe and Tuomanen are serious in their commentary, so much so their skits, song compositions, and parodies of popular song hits lose some edge. They tend to smack of populist thought, as spouted by MSNBC and other sources that peddle in generalities. Therefore, accurate or wrongheaded, they preach to the agreeing converted. They are never as pointed as I have the feeling Bearded Ladies wanted them to be, bite being overwhelmed by smugness.

They are entertaining. Even if you disagree with what Jarboe, Tuomanen, and various plant characters are verbally disseminating, you can admire the cleverness involved in conceiving each number and appreciate the downhome way the authors’ material is spiritedly and creatively presented. The commentary, even when properly barbed, never gets in the way of the fun Bearded Ladies provides. Or the concentration with which they provide it. Jarboe, for one, goes into character while greeting theatergoers outside the Pennsylvania Horticultural Society Pop-up Garden on South St. Dressed in an undersized Boy Scout uniform and skipping non-stop with a friendly but addled expression, braces, and a thlight nerdy lithp, he holds his line never signaling “Green Scout Gil” is a joke. In fact, you have the impression Gil would be wounded, to the point of possible tears, if you suggested he wasn’t just a nice, sincere, if awkward little boy.

“Bitter Homes and Gardens” is subtitled “A Botanical Hoe-Down” and perhaps Jarboe and Tuomanen’s best satire is of folksy but preachy hootenannies that you might expect to find in the Southern mountains and Midwestern plains. Tuomanen speaks with a decided drawl and peppers her pattern with corny aphorisms and a jokey spiel on the environment.

Tuomanen narrates like a good old revival tent speaker combined with a kernel-headed Dolly Parton who wins you with her kindness and sincerity. She tells stories and inveighs her audience to take positive action in terms of plant preservation and purity. She also laughs at herself, or her character that has been made so sturdy by her genetic modification, nothing can kill her. That is, until heat, I guess made more intense by global warming, turns her into popcorn the audience is invited to share.

Humor registers on all levels, at times hitting the desired note of cutting sharpness, most of the time settling for Jarboe and Tuomanen’s next zany top-of-the-head idea.

The writers are thinkers, but they are primarily entertainers who know how to put on a show. Complex and makeshift as it is, “Bitter Homes and Gardens” never becomes disjointed. Directed by Sally Ollove, it flows easily, and you have to smile at all of the ways Jarboe, Tuomanen, and company have germinated to give you a good time.

Music is as integral as comedy. Not all numbers are done as seriously as others, but the ensemble has good voices, knows how to add a dance move or gesture to their bit, and harmonizes well. Bell, Maggie Johnson, and Jenny Fernandez make wonderful agricultural Andrews Sisters doing a parody of “Don’t Sit Under the Apple Tree.” They also team to do a funny, cautionary rendition of the pop hit, “Poison Ivy.” Bob Dylan gets trotted out in his own right and in another song sung, for comic value, in his style. Joni Mitchell’s “Big Yellow Taxi” is utilized interestingly in several ways. Where a sentiment was not covered by an existing song, Jarboe and music director Heath Allen went to work to provide. One, “Rub It Together,” explains plant (and by association, human) sexuality. Allen also writes a Western-sounding jingle about Tuomanen’s evangelical corn stalk, “The Legend of Jebediah.” Western tunes are also used when the path of a natural seedling is chronicled as Jarboe sings the Sons of the Pioneers classic, “Tumblin’ Tumbleweeds,” often heard on Roy Rogers programs. Rogers gets an extra tribute as his goodbye song, “Happy Trails” comes into play. Two characters named Mary and Jane do a tribute to Colorado, Oregon and all places where marijuana is inhaled, legally or not, in “Wacky Tobacky,” which marks another instance where Kanach deserves cheers for witty costuming.

“Bitter Homes and Gardens” takes place on PHS property, and its cast is not shy about giving instructions about some of the trees and other plants in the audience’s midst. Myrtle and marigold trees are introduced, and there is a quiz later, while two long tables as which some audience members sit are decorated with potted succulents. Colin McIlvane’s stage makes great use of the natural setting. It looks earthy but leaves room for shallow but useful backstage area and site gags.

Kristen Bailey of “Metamorphosis” fame rounds out the ensemble. Everyone does a good job. Politics get spouted, but it’s the entertainment value that counts, and “Bitter Homes and Gardens” is overrun with it. [Pennsylvania Horticultural Society Pop-Up Gardens, 1438-46 South Street, and 9th and Wharton] July 1-19, 2915; beardedladiescabaret.com.