Now in its fifth year, SoLow Fest is becoming a summer performing arts institution, with over 40 productions scheduled over 11 days. The opening party kicks things off at Quig’s tomorrow night with previews of select shows ahead of the official opening June 28, 2015, but performances of some shows have already begun.

SoLow provides an outlet for Philadelphia performance artists to create low-risk boundary-pushing independent art. As the name suggests, most shows are low-budget solo pieces, many take place at homes, outside spaces, and in other non-traditional venues, almost all are low-cost pay-what-you-can. Here’s a selection of some of the most promising pieces from this year’s fest. See the full listings at solowfest.com.

The Mysteries of Jean the Bird-Catcher. {HTP}
A Phindie-connected piece which captures the essence of SoLow Fest. Julius Ferraro stepped down from his role as theater editor of these pages last fall to refocus on his own performance. He’s teamed up with talented French-American transplant Manon Manavit to form Humble Treasure Productions {HTP}, a neo-symbolist theater group which impressed last year with a literary adaptation of Paul Auster’s New York Trilogy. Their lastest piece is a translation of text by Jean Cocteau, “a short poetic theater plunge into self-annihilation … an artist with nearly infinite creative power and opportunity struggles against a history of loss. Also, there’s something in the suitcase.” June 18-27, 2015, various locations: facebook.com/events/1597178267213023.

Road May Flood. Nell Bang-Jensen and Maura Krause
Are you ready for a wild ride. Well, a ride at least. This is truly theater on the move, as performer Nell Bang-Jensen takes you on a road trip, driving around in a car as she considers the way worst-case scenarios inform the way we navigate the world. “The only way to face your fears is to imagine them. In detail… in a car with strangers… No backseat drivers.” June 22-24 on a road near you. Email: mkrause@interacttheatre.org for tickets.

A Brief History of Food, Augusta ME to Philadelphia PA, 1983 to the Present; Or, Let Me Cook You Dinner. Steve Gravelle
The buzzed-about show of the 2015 SoLow Fest. Steve Gravelle takes audiences through a 60 minute tour through important food moments in his life, pairing each of the eight memories with a tasting course of the food described, from childhood hotdogs, to the simple food meals of his French-­Canadian grandparents, to gourmet dinner parties. “Come listen, enjoy, and let him cook you dinner.” June 18-23, house at 15th and Shunk: abriefhistoryoffood.ticketleap.com.

Bicycle Face.. Hannah Van Sciver.
Feminist theory is so 2125. Every fish needs one, but when women first started riding bicycles in the 1800s, some men found it scandalous, coining the term “bicycle face” to refer to a totally real medical condition associated with this trend. Hannah Van Scriver looks to this past, the present, and a feminist theory class of the future to tell “the interconnected stories of three fictional women, separated by a century each, navigating the changing landscape of feminism, censorship, and cycling.” June 19-21, 2015, at the Independence Foundation Learning Lab, Philly Young Playwrights , 1219 Vine St, 2nd Floor: hannahvansciver.com. 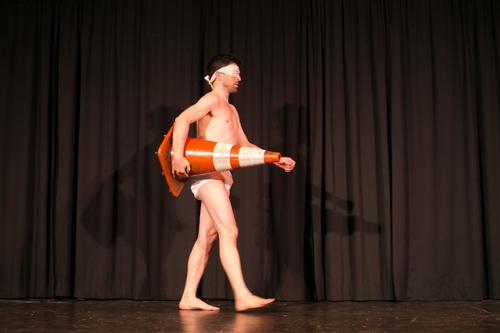 Cones. Medium Theatre Company
Have you ever wondered what it would be like to lose your sight? Do you like ice cream? And vampires? Morgan FitzPatrick Andrews (writer/ performer) and Mason Rosenthal (director), two visually impared Philly theater artists team up for a show which attempts to make the line between sightedness and blindness visible onstage. “A blindfolded boy spills secrets about eating cereal, wearing capes, avoiding bright lights and learning how to fly. When a team of eye doctors, glam rockers and new­age healers try to pry his eyes open, what will he see? The answer may be in the ice cream.” June 19-23 at the Rotunda, 4014 Walnut Street: themediums.org.

Anatomy Lesson. Joy Cutler
Playwright Joy Cutler was born with a deadly kidney disease. Years on dialysis were only relieved when she received a transplant after the death of a 17-year-old donor. She’s turned her real-life experiences into a funny and thoughtful personal celebration of life and the human body. “If you are prone to fainting when hearing about blood and needles, please faint quietly so as not to interrupt the performance.” June 26-28 at the Art Church of West Philadelphia, 52nd and Webster. Email anatomylesson99@yahoo.com for tickets.

Another 6 recommendations.
There are a lot of good shows to choose from, see for yourself at solowfest.com/2015-shows, but here a few more we’ve heard good things about (see website for details):