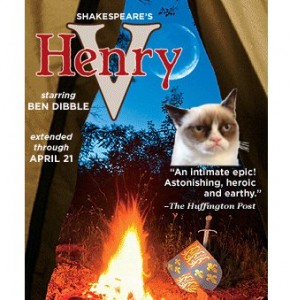 HENRY V, a wonderful Shakespeare play, is being presented by the Lantern Theater until the end of April . Charles McMahon usually does very exacting directing, but he is also known in Philadelphia theater circles as a very frugal producer who strictly limits his use of actors. To the unschooled or those unfamiliar with this play, this production is very confusing. Were they English soldiers or were they French soldiers? Identifying characters all during the play was the problem. Sometimes it was helpful that the French soldiers wore Fleur de Lis on their costumes, but there should have been far more identifying costumes. Also I think that theater should be an illusion. Having actors exercise around the stage before the show and out-in-the-open costume changes spoils the illusion. Mr. McMahon should loosen his purse strings. In his Romeo and Juliet each of the actors had to play three parts, to the audience’s confusion. How could Juliet’s maid also be Romeo’s father? Two of the players in this play were not Equity members. The director should have used more apprentices. March 14 to April 21, 2013. lanterntheater.org.