From the mind that created the internationally popular ‘Clive Barker’s Books of Blood’ and the movie ‘Hellraiser’ comes another of Barker’s successes, CRAZYFACE. The downright madness of this three-hour play is performed by a cast of over 30 of the finest members of the local BrainSpunk Theater group. 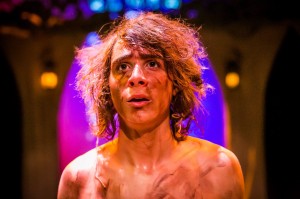 The show documents the ludicrously long journey of a foolish boy named Tyl Eulenspiegel who casually goes by the nickname Crazyface (Eric Scott Evans), during the tumultuous days of the Inquisition in a European landscape dusted with the most violent and nutty of characters.

The hellish journey begins with Crazyface, Crazy’s mother Ella (Nancy Segal), and three sister-in-laws, (Alexa Smith, Melanie Matthews, and Kara Boland), who were all once involved with Crazy’s older brother Lenny (Joel Dickerson). Alluding to previous whereabouts of always being on the run, Ella proclaims that she wants to put down roots in the crews’ newly found destination, just as Crazyface is being wrongly accused of stealing the homemade “wings” from a town fool, who had just used the devices to jump from a church balcony. Though the fool claimed to have flown before perishing, Crazy has no time to waste in taking metaphorical flight to a new place before he is captured for breaking the law.

On his own journey of coincidental mania, Crazyface is never technically solo, because he is followed around by the voices, or “angels” he has always heard and interacted with-the very reasons why the people he meets call him “crazy.” The taunting and sassy angel to accompany him on this journey, acted adorably by Aaron Palmer, never exactly leaves Crazyface, as he meets a man from Spain who gives him a little box containing, “So little a seed, so great a power.” 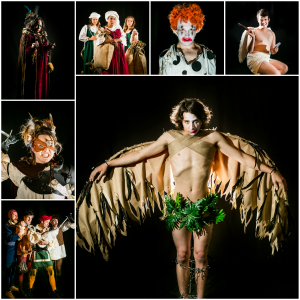 Crazy then encounters an Englishmen, a Frenchman, an Italian solider, a band of female bandits who snatch his clothes, and, eventually, a band of wedding-crazed pig breeders. At this point, a confused audience only becomes more confused as the meandering wanderings of Crazyface continue, and the King of Spain (Cynthia Evans/Geoff Bruen) and company, discover he is holding a precious gift that belongs to them.

A scene of complete destruction and set-smashing pandemonium unexpectedly confronts Crazyface with Lenny, who was recently released from a Spanish torture cell by the King’s hilariously twisted Priest figure (Abdel Pena). Lenny was tasked to find Crazyface, and return with the special seed-holding box, and more.

As a  “half-wit” on “the road to Rome” with nothing to lose, Crazyface sure shows the audience that to outwit oppressors, they might just have to succumb to the craziness that surrounds the everyday, and take unexpected solutions to new heights. As Barker through the means of Crazyface puts it, “The right wind can take you anywhere-anywhere you want.” [Christ Church Meighborhood House Theater, 20 N American Street] August 10-24, 2014. brainspunktheater.com..