Philadelphia artist and choreographer Gunnar Montana is no stranger to the Fringe Festival. Since his show ‘RUB’ debuted in 2012, the seriously experimental Montana has brought some of the most sexually evocative and twisted productions to the forefront during the festival, and the off-season. When asked about his upcoming ‘RESURRECTION ROOM’, Montana explains, “RESURRECTION ROOM is an experience. It’s as if a play slapped you across the face, and beat you over the head with performance art.”

Without giving away too much, Phindie writer L. Haber gets a peak into Montana’s specially created room, filled with what Montana describes as, “a commentary on the desire to be reborn, to become a new person, and to survive life.” 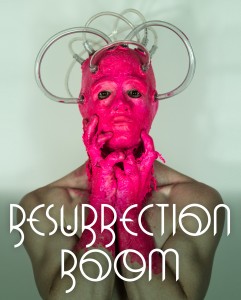 Phindie: If you had to pick between your personal dreams or reality as the inspiration for the RESURRECTION ROOM, which side of the equation would you pick and why?
Gunnar Montana: I created RESURRECTION ROOM as a complete fantasy, recently coming to the realization that I’m tired of my everyday life. I’m tired of failed relationships with friends and family. I’m tired of my restaurant job. I’m tired people and I’m bored with the world I live in, so I created a room. And from there, I built a show that inspires me, makes me smile, makes me think, and lets me get lost in performance.

Phindie: The realms of lost love and severed romance seemed to have been explored in both BASEMENT and HYBERNATE. Can we expect a similar theme in RR, or is an entirely different concept being brought to light?
Gunnar Montana: What can I say? I’m a hopeless romantic, and being that romance seems to be becoming more and more hopeless these days, I find myself compelled to share my feelings towards it. Yet, there is no need to beat a dead horse. RR has a relationship in it. Whether it’s romantic or not, is up for interpretation. I wanted to touch base on companionship and how important I feel it is to have that in life. RESURRECTION ROOM plays with the concepts of life and death in many forms, including the relationship, and the characters in it.

Phindie: The word ‘resurrection’ tends to bear a religious connotation. Is there any religious commentary or thoughts provoking the dancing or acting in RR?
Gunnar Montana: Oh yes. I wanted to create a cult of aliens that lived underground and built a way of life that people watching the show wouldn’t necessarily understand. The idea is that death isn’t even a possibility in this room. So when a character dies there are certain rituals that take place to resurrect them or transform them. I’ve choreographed a lot of this show to feel ritualistic. There is a lot of repetition, steps, and phases. There are things that happen in this room that the audience won’t understand simply because they are intruding on an alien race and practices, and their religion. I’ve been inspired by cults and groups of extremists, but not necessarily major religions. My ideas behind structured religion are very dark, very strong, and very pessimistic. When I want to comment on that with a show, believe me, you will know. 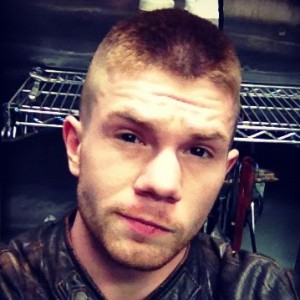 Phindie: Your FringeArts ‘experiences’ are known to have intricate art installations as sets, most of which have a life of their own. Can you tell us a little bit about some of the unusual materials and processes you used to design the props for RR?
Gunnar Montana: RR is highly futuristic in a sense. I wanted to approach my work in a very clean and clear fashion this time around. Whereas BASEMENT was designed to be disgusting, torn apart, and highly macabre, I wanted RR to feel fresh and new, and well designed. I’ve designed the RR as a space cave. There are industrial stalactites and stalagmites the hang from the ceiling and jut out of the floor, constructed of milk crates and safety cones, as well as a massive chandelier that hangs in the center of a modern day black box I’ve constructed entirely out of black plastic sheeting. All of these things are embellished with over 1,500 melted CDs, which I have been melting by hand with a heat gun since March. I have made it a point to make this room, which HYBERNATE was performed in, unrecognizable to my followers. For this show in particular, it’s important to me that the audience doesn’t know where they are, or where the performers are coming from.

Phindie: Who are the other performers and what roles do they play in this particular show?
Gunnar Montana: RESURRECTION ROOM has a cast of five performers, including myself. Steph Lyniece and I have been working together since we graduated from University of the Arts. This time around, I handed the blonde vixen a leading role. She’s the human character. She stumbles upon this room, interacting with those who live there, and she has to find a way to overcome a world that’s dead set on eating her alive.

Everyone in this production plays multiple characters. I’ve created an alien race that is played throughout the show by the entire cast. On top of that, everyone has an alter ego, which they perform as well. For instance, I play the alien love interest and also a completely insane ‘Body snatcher’ character that is hyper-masculine looking, and hyper-feminine acting.

Some new additions to the company are a duo of drag queens. I sought out both “Iris Spectre” and “Lady Poison”, finding them to be very powerful performers in the gay nightlife scene. In the show, they take on multiple characters, including a robot death machine, an androgynous phoenix, and a pair of demon geishas that represent my cynical perception of the mainstream gay community.

Last but not least, I’m excited to have Keenan Deon as a new member of my company. He’s a beautiful man with a beautiful sense of movement. He will be taking on the role of a homoerotic ‘witchdoctor’ that exchanges the ‘life’ of the living to the bodies of the dead.

This cast in itself is dramatically diverse in the way we all perform. It’s been a really exciting challenge, fusing all our qualities together and creating the characters for this room. One of my favorite aspects of RESURRECTION ROOM is that it is a male dominated cast, yet most of the characters in the show are sexless, androgynous, or abstractly feminine.

One Reply to “Gunnar Montana rises: Interview with the experimental Fringe stalwart about his show RESURRECTION ROOM”