In this, the second of her three-part series on the Walnut Street Theatre, Katelyn Behrman looks at how the Walnut puts together its season of popular productions, and considers the opportunities presented by the second stage and rented facilities.

The Walnut’s current productions reflect the populist mission of its artistic director Bernard Havard and a popular tradition stretching back to the theater’s early days. “The season here is structured around a framework, in a similar way to the way a vaudeville program was put together in the nineteenth century to achieve maximum popularity,” Havard explains. “The keystone to the season is the holiday production: the holiday musical. It’s a nine-week production: seven on subscription, two on non-subscription.” He taps the table, “And that has to be a successful family-oriented musical where people can bring their families and their children to enjoy a production for the holidays.” For the 2013/14 season, the Walnut chose Elf; this coming season, the Walnut will produce Mary Poppins, which is set to run from November 4, 2014–January 4, 2015.

After choosing the holiday musical, Havard “works forward by one” and picks the musical that will commence the season. “Generally speaking,” he begins, “that will be a more risk-taking musical, something that the audience hasn’t necessarily been exposed to before, like our production this year, we opened with…I’m forgetting the name already…” he chuckles and takes a sip of his venti coffee, which his wife, Judy, just delivered to him, gently mocking that he had already had 20 ounces today. The name of the play clicks: In the Heights. (In 2014/15, the musical Memphis will conclude the season.) 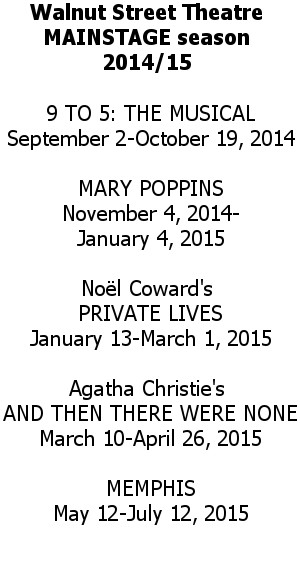 To start the new year, Havard selects a slightly more serious, “straight” play (non-musical): for 2015, the selection is Noel Coward’s Private Lives. “It’s because people generally are going away. A lot of our subscribers go away for Christmas holidays, get out of the cold for a few weeks and go to Florida.” For this reason, Havard feels that he doesn’t necessarily need to cater to his subscription-based audience. Instead, he can choose a play that is a little edgier and not quite the blockbuster of the summer and holiday productions.

This past January, Havard selected Other Desert Cities as the play to follow the holiday musical, Elf. Nominee for the Tony Award for Best Play and a finalist for the Pulitzer Prize for Drama, Jon Robin Baitz’s Broadway drama Other Desert Cities explores the cutting tension between a daughter and her family. Having returned home to celebrate Christmas in Palm Springs with her parents, a budding New York novelist reveals that her most recent work is a secret-spilling memoir. The play explodes with dark humor as the knowledge of the upcoming memoir tears apart the family.

“It’s an intimate, dark play: a lot of emotional and political issues are involved,” remarks University of Pennsylvania theater professor Jim Schlatter. “I commend the Walnut Street Theater for doing Other Desert Cities.” Although less well known than most plays that Havard chooses to produce on the Mainstage, this play still contains a universal theme, making it appealing to a wide audience.

Actor Krista Apple-Hodge who played the role of the daughter, Brooke Wyeth, in the Walnut production, explains, “Other Desert Cities really nailed, in my opinion, the subtle stresses and complications of family dynamics. It’s what makes the play so appealing and universal: not only is it a riveting story, it’s based on normal situations, awkward holidays, that we can all relate to in one way or another.”

From the first crack at the “pleasantness” of an icy, Northeastern winter, the audience, having just hung their coats onto the back of their seats and tucked their hats, scarves, and gloves in the space in front of them, roared: making it evident that the play had already connected with its audience, despite it not being the traditional “splashy” musical of the Mainstage.

The Walnut defines its Mainstage season as the “season of blockbusters.” As the largest space and the most subscribed-to season, the Mainstage has to appeal to the widest number of people, which explains why Havard chooses fun, energetic musicals as the highlights of the season. Reflecting on the choices of the Mainstage, journalist (and Phindie editor) Christopher Munden comments, “I don’t want to be too critical and say that, uh—” he pauses, “—that a subscriber-based financial model will take precedence over some kind of artistic integrity, because I think there can be an accessible integrity to popular theater. But I think it is a priority to do stuff that the subscriber base is going to consistently come back to.”

Schlatter believes that the Walnut picks the plays it does for the Mainstage partly because of the size of that stage. He notes, “The Walnut is just a big theater and Havard tends to do big productions, and that’s why musicals fit in there well. So, you almost expect: I want to go see a Broadway kind of play in a Broadway kind of theater—the Mainstage.”

The Walnut’s actors also sense theimmensity of the Mainstage. Apple-Hodge, who had never performed before in a venue as large as the Walnut, excitedly says, “Not only is everything bigger onstage, everything is bigger offstage, too! I had my own dressing room for the first time, with my own private bathroom and shower. That never happens elsewhere in Philly!” She chuckles, adding, “I actually went directly from this show—private “star” dressing room, etc., etc.—to a show where my dressing room was the corner of an old Sunday school room, with curtains for makeshift walls. Ahhh, an actor’s life!”

Tom Quinn and Bernard Havard admit that the size of the Mainstage influences their choice of plays. Quinn explains, “When your Mainstage is as large as ours is, if we do a brand-new play that no one’s ever heard of, we can’t do that. We can’t be like Broadway, because we’ve got all these other things that we want to support, to keep ourselves going. And we want to choose shows that we know people are going to want to come and see. We can’t close a new play in a week like Broadway.” Havard adds, “The 1,070-seat proscenium house is somewhat presentational: the actors are on the other side of the fourth wall. They project out to you, emotionally, and aurally.”

This separation between the stage and the audience posed a challenge for Apple-Hodge while playing Brooke in Other Desert Cities. She explains, “Telling this story—which is at times very quiet and intimate—to a large room full of people was a great challenge to have. It taught me a lot, as an actor.”

While a rewarding experience for Apple-Hodge, theater critic Rebecca Goering felt the distance from the audience inhibited the play. In her review on Broadway World, she writes, “Though the Walnut’s large-scale set was beautiful, staging the production in such a large and disconnected environment lost all the intimacy of which this play needs and benefits.” Perhaps then, the play would have been better received had it been produced in the Walnut’s Independence Studio on 3, a smaller theater that caters to the subscriber who desires a more challenging, and intimate, theater experience than that of the subscriber of the popular Mainstage. 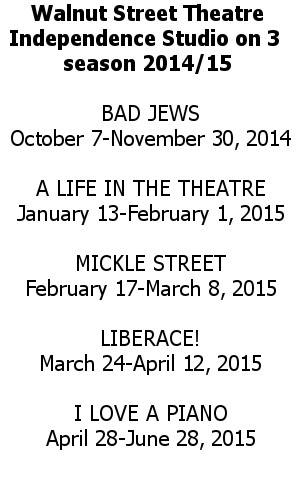 Independence Studio on 3 seats only sixty to eighty people. The smaller audience enables the Walnut to produce riskier plays, as the plays are designed to appeal to a select few rather than a 1,000-person audience, a difference that perhaps allows the Walnut to satisfy the more “elite” audience member.

Havard remarks, “I would not be so concerned about language, for instance, or tough emotional issues that we address in the Studio. We would not dare to attempt that on the Mainstage, because it would alienate a large number of our subscriber audience who don’t wish to go so far in terms of cultural experience.” He tilts his head to the side, “It’s less of an issue in the Studio because it’s more of an intimate space, and we warn people ahead of time. If you’re not up for an adventure, don’t come. Don’t tell me that you don’t like the language or the nudity or whatever it is: it’s part of the experience upstairs in the Studio.”

After attending the premiere of Australian play Speaking in Tongues at the Studio, Christopher Munden had the chance to speak with Bernard Havard. “You could tell that this was something that he believed in and he respected and he wanted to put on in Philadelphia,” remembers Munden. “He wouldn’t have been able to do a subscription production of it on his big stage. But, he was able to do it in the Studio.”

The Studio has seen plays tackling issues ranging from autism to AIDS and adoption to the problems facing the Catholic Church. In February, the Studio premiered Eric Conger’s Beautiful Boy, an intense exploration of parents’ rights and children’s knowledge. “In this particular play,” warns Havard, “the Catholic Church comes into some pretty harsh criticism. I wouldn’t attempt to do that on the Mainstage, because I don’t wish to alienate a large sector of our audience, which I know are Catholic. So, I wouldn’t do it anymore than I would want to alienate the Jewish community with doing a production of the Merchant of Venice on the main stage and portraying Shylock as an avaricious, cruel, old Semite. I don’t care to piss off the Jewish community,” he finishes with a curt nod of his head.

In addition to confronting challenging issues, the Studio space also has mesmerized its audience with its ability to transform the small, black-box styled theater. For example, during this season’s production of Jim Cartwright’s The Rise and Fall of Little Voice, the entire set burns down by the end of the play.

Quinn creaks open the heavy door that leads into the entrance of Studio on 3. He flicks on the light and reveals the two-story set. Dainty furniture, from a petite table with two chairs to a silver and gold couch, line the floor, while a 1950s era kitchen sits against the back wall. He paces around the simple, fold-up chairs that sit just on the edge of the floor and says, “Normally when we do shows in here, it’s a very small production value-wise, because you can’t do a whole lot. But, we got super creative when it came this year. It’s amazing—the space burns down. We just did a show in here before where there were video monitors all around; there were eighteen different TVs hooked up, so some really cool artistic stuff in here: the way it transforms. Every time we have an opening in here it blows my mind what we can do.”

In addition to the Independence Studio on 3, the Walnut rents out the studio on the fifth floor, Studio 5, to local Philadelphia companies. “It’s very small, with very limited technical capabilities,” explains Schlatter. “But, at the same time, all the companies starting out really want space, some technical capabilities to light the stage, and to build some type of very minimal set and then fill the house and fit 40-60 people. And that’s huge!” Quinn adds that many smaller theaters in Philadelphia have actually gotten their start from renting the Walnut’s space. “The Arden started here in the late 80s,” he notes. Today, the Arden is a full-service professional regional theater in Old City that often performs edgy dramas.

“Having a place where you can really just grassroots start out is really important,” adds Schlatter, smoothing a stack of papers on his desk. “And, Bernard Havard is providing that to new theater companies: He’s very much a part of Philadelphia culture.”

Read part 1, about the Walnut’s commitment to popular theater, and part 3, on the Walnut’s place in the Philadelphia theater community.