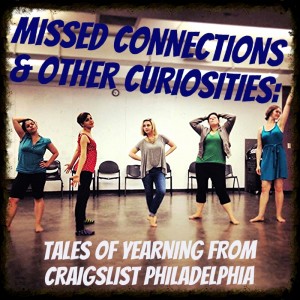 There’s a wonderful movement these days in the Philadelphia theater world to give voice to our younger generation. Dwindling arts funding, as well as the Fringe’s ineffectiveness as a vehicle for new work, has created a void of opportunities for young artists to showcase their work without going bankrupt. Seeing this need, Simpatico Theatre Project  has joined BRAT Productions (Brat Sh#t Crazy), Azuka Theater (the New Professionals Program), Plays and Players (Emerging Artists in Residence), and several others in introducing ancillary programs dedicated toward new or emerging artists. Now up, MISSED CONNECTIONS & OTHER CURIOSITIES, a cabaret-style evening in which groups of artists are tasked with dramatizing Craigslist postings.

As is to be expected with such a loose format with so many artists, some of it is brilliant, and some of it is not so good. Sarah Schol’s monologue as a lustful mattress bemoaning her owners’ prudishness is worth the cost of admission by itself, and the simple musical ballads performed by Connor McAndrews and Bryan Black are treats to watch. However, the longer form pieces are tedious and self-aggrandizing; Out of All We Lost (directed by Phoebe Schaub), does nothing but distract from its message with extraneous movement and sound, while Impersonally Personal (under the direction of Amber Emory) tells a five minute story in just under twenty-five minutes. The arc of the evening is curious as well; Craigslist provides such a wealth of wonderful experiences to examine, that I felt confined and disappointed listening to personal ads and missed connections much of the evening. Where are the sketchy job offerings? The scammy Nigerian princesses? The random new flatmates? The rants and raves section? The concept is fertile enough to put on a monthly series (hint, hint, worth doing), so treading the same ground so many times in such a short show seems like a missed opportunity. June 13-15, 2014; simpaticotheatre.org.