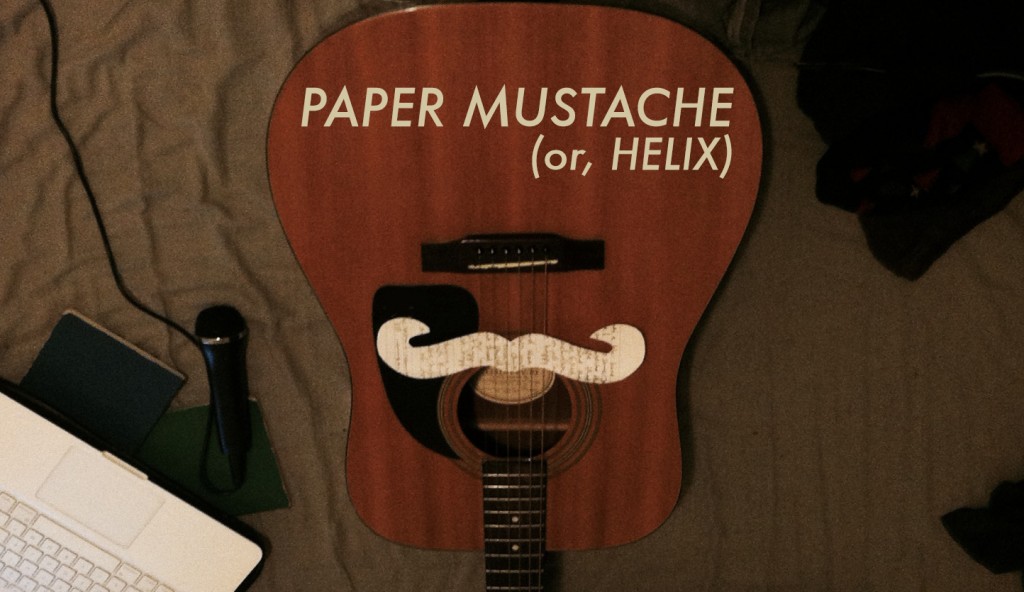 In the SoLow Fest this year, some 30+ artists are creating cheap cheap theater in formal and informal spaces around the city. Challenging the idea that budget = quality, artistic rogues and rebels bring audiences weird and exciting experiences ranging from ritual to comedy, from dance to cabaret to roving outdoor showcases, and through every stage of performance in between.

This episode we have autobiography in Chinatown, pillow talk in Uni City, and time-based performance exploring the edges of perception in South Philly.

SoLow Fest co-founder Thomas Choinacky got into it in the beginning to put on his own solo show; almost every year since then he’s contributed a show alongside his administrative duties. We talk about five years of SoLow evolution and seeing what’s not meant to be seen:

Thomas Choinacky: As an audience member I’m always interested in what happens in the background. Seeing how a director, designer, or band decides to organize their space and things beyond the main point of focus. These peripheral things are what shape your feelings and attention to the actual focus(es). In performance we have the freedom to see the whole stage and what gets filled and what lays empty. And what appears empty to one person may seem quite full to another. It’s all about perspective.

JF: What’s surprising you about this year’s SoLow? Is it as much work as you expected?

TC: Oh it is always more work than I think.

I think what surprises me is the number of new artists we have every year for SoLow. Around half our artists each year are self-producing their work for the first time. It continues to make me proud to have co-birthed with Amanda Grove this festival that has become a standard for artists to test out material and try their hand at producing in a low stress manner.

JF: Do you ever find it strange having strangers in your home?

TC: The first time I was probably nervous about it, but now it is just a part of me making art. I don’t have a theatre to rehearse and make art at, but I do have a house. It is where I rehearse and write, and it becomes the world for the pieces I create. It is just another type of performance like a dinner party or something.

JF: What makes Backup different from anything you’ve done before?

TC: I would say that Backup is the first piece that I can’t quite classify what type of work it is. This excites me about artmaking and this project. Without framing it too much, Backup gives the audience agency to get what they want out of the work. 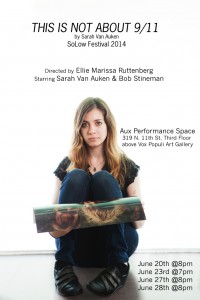 Sarah Van Auken has been working as an actress in and around Philly for the last three years, and has performed with companies like InterAct, Inis Nua, Simpatico, New City etc. She participated in the Simpatico SoLow Incubator and is now having her playwriting debut for SoLow. We talk about autobiography and protesting the inevitable:

JF: What led to the creation of a solo piece, and why now?

Sarah Van Auken: What led to the creation of this piece has been life experience. My father died on September 11th. I’ve explored the loss artistically before, but that was through music. Almost a year ago, I was about to leave for a trip to Europe, and my friend Ankita was visiting me to say goodbye. We began talking hypothetically about me writing a play about 9/11. In the context of that conversation, my mother’s political activism in the wake of my father’s death seemed to be the obvious subject-matter of any play I’d write about it. I remember telling Ankita, with gusto, that I “would NEVER write ANYTHING about 9/11. EVER.” While I was in Amsterdam, my mother saw a post on Facebook about Simpatico’s SoLow Incubator. Being incredibly supportive and wonderful, she encouraged me to write something. Again, I emphatically refused. Later that day, as I lay in my hotel bedroom trying to take a nap, the title of my play came to me like it was the most obvious thing in the world. I realized in that moment that I actually have a story of my own to tell. So, I ate my words, applied for the Incubator, got in, immediately regretted everything, traveled around the world some more, got over my regret, wrote my play, edited it a lot and here I am. I guess you could say this piece has been brewing in me for quite some time, and I’m in a place now where I’m both separated enough from what happened to have clarity, and not separated from it at all—if that makes any sense.

JF: You say in your blurb that your interview is “different” from the others. Could you explain this?

SVA: Again, at the risk of sounding cryptic, the interviewer has an agenda and so do I. Conflict ensues. Please come see it to find out more!!!

Two years ago the Drexel Players, along with James Haro, presented MONUMENT, a devised theater piece and the product of a successful indiegogo campaign. Since then, Haro has played many roles including director, producer, performer and deviser. We talk about his SoLow play-on-a-memory-foam-mattress, Paper Mustache (or, Helix)

James Haro: YES! Someone who understands! Mine rests comfortably on my floor under a window in my room and I sleep like a baby.

JF: Do you remember a moment or series of events that inspired this piece?

JH: I had an inkling of an idea that involved pillow talk—it was just on my mind as something interesting to me that occurs. But then I started to think instead about intimate things that happen in bed that have nothing to do with relationships or sex and I thought about this one time that I recorded vocals for a song of mine with two close friends present, and I had them sing on the track with me, and how that all happened on my bed as a result of just hanging out. So I decided that I wanted to re-create that memory in a sense and make an interactive piece that brought an audience, two people at a time, onto my bed to help me record a song and build a story around that.

JF: Take me through some of the hilarities, travails, tragedies, and joys of creating Helix.

JH: Honestly, the idea of lapsed friendships has been on my mind recently.  It’s just this sad thing that occurs where someone means so much to you, and they’re there for such big moments in your life, and save your life in some cases, then they just—they’re not there anymore. They’re not dead, they’re just—lives don’t always remain entwined I guess.  Like the Boy Meets World episode when they show a darkest timeline sort of scenario where they all end up at Mr. Feeney’s retirement, 15 years in the future or so, and all these close friends have just lost touch.