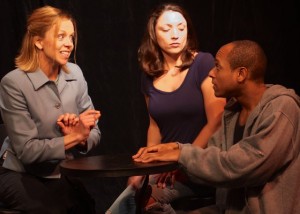 PROBLEM CHILD marks a welcome return to Walker’s world of down-on-their-luck characters, placed in unhappy and absurd situations. Talk show obsessed R.J. (Matt Shell) and his ex-junkie girlfriend Denise (Gina Martino) are camped in the Suburban Motel awaiting a call from child care officer Helen (Michelle Pauls). Helen is unconvinced that the couple is ready to retrieve their child from foster care, and Denise’s stand-off attitude and evident desperation do little to convince her. When Denise decides to take matters into her own inept hands, alcoholic hotel manager Phillie (Anamugavel Nagarajan) is there to lend dubious assistance.

Walking Fish has billed its current season as “Comedies about things that aren’t funny,” and Walker’s script again demonstrates that humor is best found in unlikely places. As in last season’s shows, PROBLEM CHILD is heavily plotted and drifts to the unbelieveable. But even more than last season’s productions, PROBLEM CHILD feels ripe with real human emotion. Much of this is thanks to Martino’s work as Denise.

Martino is an actor I have come to very much admire based solely on three encounters in the Suburban Motel series: as a prostitute, a bullied Russian daughter, and now a distraught mother. Her range across the roles is commendable, and her performance in PROBLEM CHILD forms the human heart of Stan Heleva’s strong production.

Other cast members also excel. The ever-talented Pauls is in turns officious and absurd, and Shell well communicates R.J.’s concern for his flailing partner. It is always concerning to read an actor’s bio before a performance and see “this is his first professional theater play”. but such a fact is barely evident in Nagarajan’s energetic though at times endearingly incoherent performance.

Viewers who enjoyed last season’s Suburban Motel plays will find PROBLEM CHILD the best of the series so far. Others should head to Kensington while there’s still time to enter Walker’s delightfully disturbed world. November 1-17, 2012, bsomeday.org.