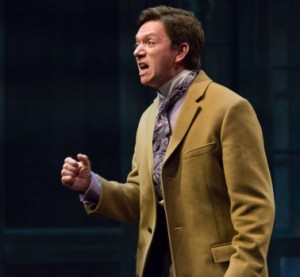 At People’s Light and Theatre’s production of Henrik Ibsen’s GHOSTS, the program note written by dramaturg Gina Pisasale discusses Ibsen’s life and work. In his theater, Pisasale tells us, Ibsen created a realistic style which overthrew “the highly presentational, formulaic, and overblown style” of the time.

Too damn much happens to Helen Alving in one day. The consequences of her long, miserable marriage are not just the syphilis her son inherits, and the misery of a long struggle against impossible drudgery and shame, but also, cryptically, a conflagration which claims the orphanage that is to be her future and legacy.

In his time it was too real for comfort, as A DOLL’S HOUSE’s censorship demonstrates, but what we have inherited 130 years after the publication of GHOSTS is a melodramatic play.

Not that Ibsen’s ideas are irrelevant. In the People’s Light lobby, text bubbles of anti-feminist quotes by a variety of figures ranging from Queen Victoria to Mitt Romney are displayed, to remind us of this. The continued worldwide tyranny of fashion and advertising industries over women’s bodies, and the potential viability of far-right political candidates like Dick Black, speak to the immediacy of this. The really fearsome thing about Ibsen is that his ideas are still somehow revolutionary to some. 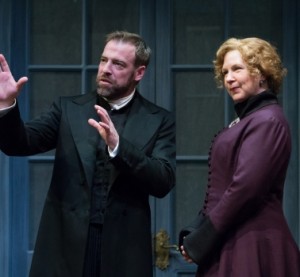 There is a lot of good to say about Marini’s production. Keith Conallen as Oswald and Ian Merrill Peakes as Manders are immensely watchable. Peter DeLaurier’s goofy Engstrand feels a little out of place, but the enormously talented Mary Tuomanen rounds out the ensemble as the willful, caustic Regina Engstrand. James F. Pyne, Jr.’s set is immersive and gorgeous.

But GHOSTS is a massive play for whoever plays Helen Alving. Kathryn Petersen gives an effort, but it is clear that she does not have the range. In the first act, her energy sinks into the floor, as she perhaps saves her strength for when the roof will truly fall in on Helen. The result is that Helen’s free love rhetoric, and her confessions about her married life, become a lecture, a litany of ideas, and not something to which Helen has an emotional relation.

And in Ibsen’s unforgiving final moments, the ugly head of the melodrama of his realism finally makes itself seen. It cannot be avoided. It is not modern or realistic in the least. And it doesn’t feel as if it fits into this production, and so in the audience you almost find yourself laughing, which isn’t appropriate at all. January 15-February 9, People’s Light and Theatre, 39 Conestoga Rd, Malvern, PA, www.peopleslight.org.

2 Replies to “GHOSTS (People’s Light): Just give in to the melodrama”