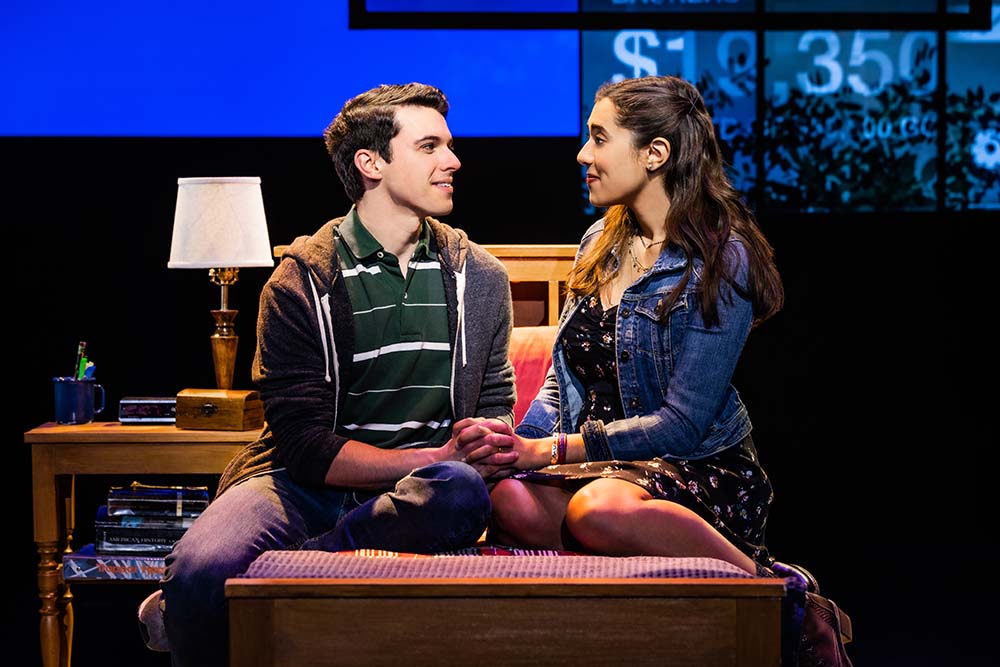 Part of me wishes I could have seen Dear Evan Hansen in its original 2016 production, which the New York Times lauded for the indelible performance of its lead and its “sensitive” book. Has our perception of the world shifted so dramatically in the last half-decade?

The story of a shy high schooler who inserts himself into a family’s tragedy, the show’s message is deeply cynical: that social media and community solidarity in the face of tragic events are ultimately self-serving. This bitter message is made even darker by the almost scientifically engineered pop soundtrack and lyrics. The show has the potential to be a scathing indictment of youth culture, toxic positivity, and the ways in which our fragmented society misses people, especially children, who need care. However the slick production elides opportunities to wrestle with its own darkness.

With a stronger cast, these issues might matter less; but with the current touring cast onstage at the Forrest Theatre, these issues are all but impossible to ignore. Anthony Norman’s Evan is quiet, quirky, funny. Rather than explore the deeper, darker aspects of Evan’s pathology, Norman veers into more standard high school nerd territory (think: snort-laughing). His voice, full of character in quiet moments, can’t sustain the demands of the show’s soaring pop score. The results range from disappointing to grating as he tries to get through, then riffs, runs, and belts, all while committing to the character’s signature awkward physicality.

As the other emotional linchpin of the show, Coleen Sexton plays Evan’s mother Heidi with a disappointing lack of nuance or subtlety. Thus moments in Act Two that are supposed to be punches in the gut border on parody, as when she squeals “I am your mother!” Her delivery of her bitter rebuke of her son “Good for You” was oddly sensual and lithe.

The rest of the supporting players follow suit; mostly overacting and performing slightly under par for the musical demands of the show. Two pleasant exceptions were Pablo David Laucerica’s deliciously slimeball performance as Evan’s “family friend,” Jared and Nikhil Saboo’s irreverent turn as (the real and imagined) Connor Murphy.

Michael Grieff’s production is sleek and well designed. Peter Nigrini’s projections, which flood the stage with an onslaught of social media, are probably the highlight of the whole evening. However, in Grieff’s staging, Danny Medford’s choreography mostly consists of walking and standing dramatically.

Am I a giant stick in the mud? Possibly. Judging by the crowds around me on Wednesday’s performance, many were swept up by the emotional story on stage. For what it’s worth, I did cry, but the tears never felt earned. If the point of the show is to say that ultimately, human emotions are easily exploitable, then bullseye.