As part of its Transformation Repertory, Quintessence Theatre Company presents one of Shakespeare’s most beguiling plays, The Winter’s Tale. Sometimes classified as a “late romance,” or a “tragi-comedy,” or simply “a problem play,” The Winter’s Tale spans two countries and 16 years. Rather than jump back and forth between comedy and tragedy throughout the show, Shakespeare experimented with an unusual structure: Act 1 is a tragedy, whereas Act 2 is a comedy. This shift in style can be a puzzle for actors, directors, and audiences. 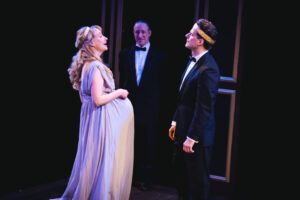 Alexander Burns’ production decides to lean into the tonal contrasts of the play’s two parts rather than try to blend them into one cohesive piece. This strategy works in that audiences get the best of both worlds. In the show’s dramatic first act, we see King Leontes of Sicilia (Michael Zlabinger) accuse his wife Hermione (Hillary Parker) of having an affair with his best friend and house guest, King Polixenes of Bohemia (Amari Ingram). His jealousy and suspicion becomes too much for him, causing him to imprisons his wife and try to murder his best friend. The wrongfully accused Hermione remains a icon of purity and innocence and through some swift dramatic business dies after giving birth to a new daughter, Perdita (played by Kristin Divine Jones).

The highlight of the show’s dramatic first two acts is Eleni Delopoulos as Paulina, Hermione’s midwife and fiercest advocate. While Parker’s Hermione seems to passively accept her fate, assuming her innocence will be enough, Delopoulos’ Paulina is pure fire in pleading her lady’s innocence. 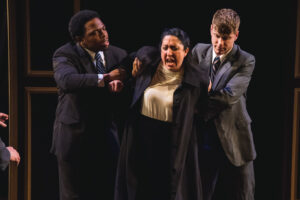 Then someone gets chased off stage by a bear (designed by Curtis Coyote) and things take a turn for the clownish (in the best possible way). Sixteen years pass and now Perdita, who was rescued (by the man pursued by the bear) is the adopted daughter of a local shepherd (Joseph Langham) in Bohemia. As opposed to the cool corporate royalty of Sicilia, the Bohemians are portrayed as loveable clowns. There are disguises, marriage plots, and a very, very funny ne’er do well conman (played with musical aplomb by Jered McLenigan). In Bohemia the whole cast shines with comic mischief and delight.

Unfortunately, under Burns’ direction, the Bohemians all use an exaggerated American southern dialect. This (for lack of a better word) “hillbilly” aesthetic is accentuated further by the costumes (by Jane Casanave) which features daisy dukes, overalls, and pigtails. These decisions can feel a cheap shot in a show that is otherwise thoughtful and well-acted.

Proof of Covid vaccination and ID are required to attend, and guests must remain masked throughout the show. 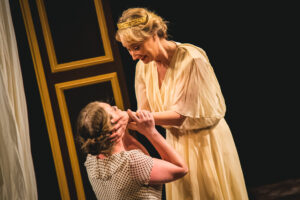