Taking place entirely in a tailor’s shop, The Outfit feels like a drawing-room play with a pot of water boiling the whole time. While a single location can sometimes be death on film and come across as airless, it works here for this powder-keg kind of story. Author Graham Moore (who adapted his book The Imitation Game for the Benedict Cumberbatch-starrer of the same name) makes his writing-directing debut, and he decidedly shows a lot of skill in ratcheting up tension and claustrophobia in mostly one room for one long night. It’s a little like Hitchcock’s Rope in that way, but with more sharp objects. 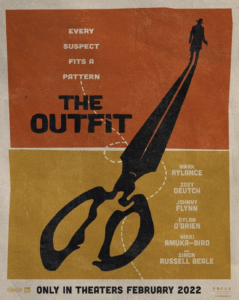 Set in Chicago, 1956, the film establishes the small day-to-day operation at a tailor shop, L. Burling. Formerly working on London’s Savile Row, English master tailor/cutter Leonard Burling (Mark Rylance) runs the joint, with assistance from secretary Mable (Zoey Deutch). Gentlemen customers willing to pay for Leonard’s high-end suits come into the shop all day, and the majority of them are gangsters who bring their own business with them. Late one night, that business gets out of hand. While there’s a whole mob firestorm going on outside, Richie (Dylan O’Brien), the arrogant son of mob boss Roy Boyle (Simon Russell Beale), and right-hand man Francis (Johnny Flynn) come knocking in the middle of the night. One of the wise guys has been shot, and they need Leonard to fix him up. Things go sideways, of course, with a briefcase and a crime syndicate known as The Outfit, created by Al Capone. Who’s the rat among them, and who allowed the feds to plant a bug?

Besides being a solid, handsomely mounted period thriller, The Outfit works as a perfect showcase for Mark Rylance’s talents. Though he always seems to find unexpected humanity in the parts he takes, Rylance has yet to become a household name. The endlessly fascinating role of Leonard is tailor-made for Rylance. In a film that doesn’t show all of its cards, Rylance’s quietly compelling, carefully modulated performance does the same, constantly keeping us on our toes and changing over the course of this one night. When he expresses his dislike for blue jeans, you can’t wait to find out why.

Zoey Deutch holds her own opposite Rylance. Her Mable is more than just a secretary, but a young woman with dreams of traveling the world and maybe even secrets of her own. Together, Rylance and Deutch also have lovely chemistry as a surrogate father and daughter. Johnny Flynn is appropriately menacing as the hot-headed Francis, and Nikki Amuka-Bird also makes an impression in a single scene as a rival crime boss.

As dialogue-heavy as it is, The Outfit is effective as a slow-cooker with bursts of striking violence. Oh, there will be blood. The script, co-written by Moore and writer Johnathan McClain, may get too cute by half, pulling one rabbit after another out of its hat, but one would be hard-pressed on which rabbit to cut. Cinematographer Dick Pope’s lensing takes full advantage of the space and finds enough variety without falling into stagy repetition, and Alexandre Desplat’s piano-heavy score complements every beat.

As a chamber-piece thriller, The Outfit is just as clever as it thinks it is, and that Rylance guy is going places.

Focus Features is releasing the film in theaters on March 18, 2022.