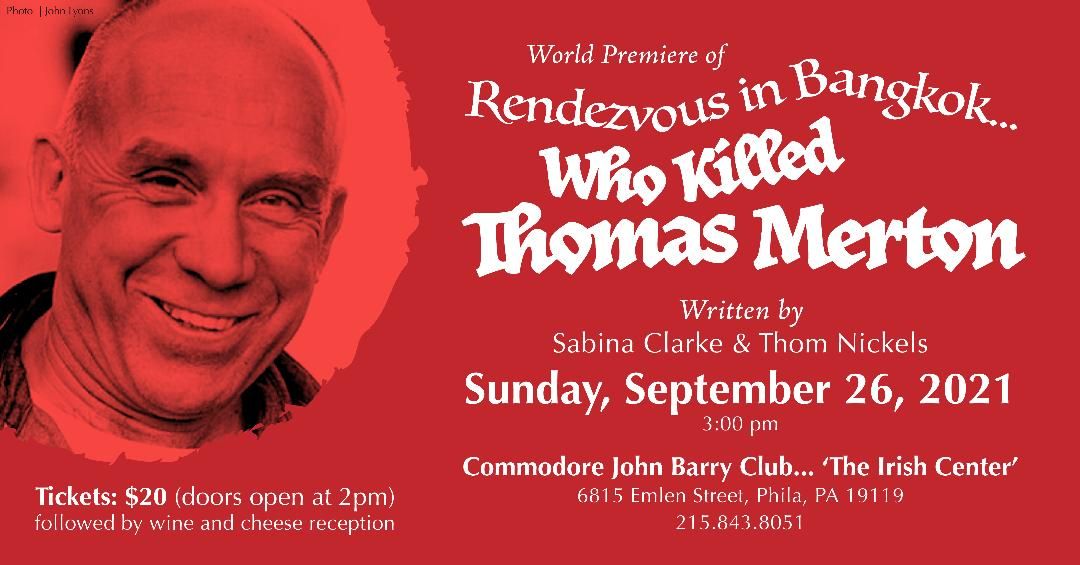 Thomas Merton (1915-1968) was the most influential American Catholic author of the twentieth century. His autobiography, The Seven Storey Mountain, sold over one million copies and has been translated into over fifteen languages. This fascinating monk is the subject of a new play by Philadelphia writers Thom Nickels and Sabina Clarke. Rendezvous in Bangkok…Who Killed Thomas Merton makes its world premiere with a one-time performance at the Commodore John Barry Club, 6815 Emlen Street in Mount Airy on Sunday, September 26th at 3 p.m.

After a rambunctious youth and adolescence, he converted to Roman Catholicism while a student at Columbia University and on December 10, 1941, entered the Abbey of Gethsemane in Kentucky, a community of monks belonging to the Order of Cistercians of the Strict Observance (Trappist’s), the most ascetic Roman Catholic monastic order.

Merton was a harsh critic of the Vietnam War and saw war as the root of all evil. His writings on social issues of the day drew criticism from both Catholics and non-Catholics who thought a monk should not be involved with issues beyond monastery walls.

He was warned by his Abbot General to stop writing against the Vietnam War and about the threat of nuclear war. He was also warned by the Vatican.

On his first trip to the Far East to attend a conference in Thailand on the feasibility of creating a dialogue between Eastern mysticism and Christianity, Thomas Merton died on December 10, 1968. His mysterious and sudden death left many questions unanswered. Rendezvous in Bangkok…Who Killed Thomas Merton seeks to answer some of those questions.