On March 23, 2020, Philadelphia officially went into a lockdown that’s still to end. It’s kinda like we’ve all been stuck in an artificial world, imprisoned by the strictures of our society. Well, Ibsen had a thing or two to say about this. So to coincide with the one-year anniversary of Philly’s stay-at-home order, wife and husband team Jennifer Summerfield and Kyle Cassidy are releasing their quarantine-themed adaptation of A Doll’s House, their third Ibsen production since 2013.

Jessica DalCanton plays protofeminist icon Nora, Cassidy directs, and Summerfield (a veteran Philly actor with company stints at Hedgerow and Curio) plays Nora’s practical friend Christine Linde. The 90-minute feature film was shot remotely on cell phones and edited by award-winning filmmaker Anna Gamarnik. While the core of the acting talent is from Philadelphia, remote filmmaking allowed University of Louisiana theater professor Carl Granieri to play Nora’s husband, Torvald, and musician Jo Beth Young to provide the soundtrack from her home in Western Ireland. We talked to Jen and Kyle about their new project. 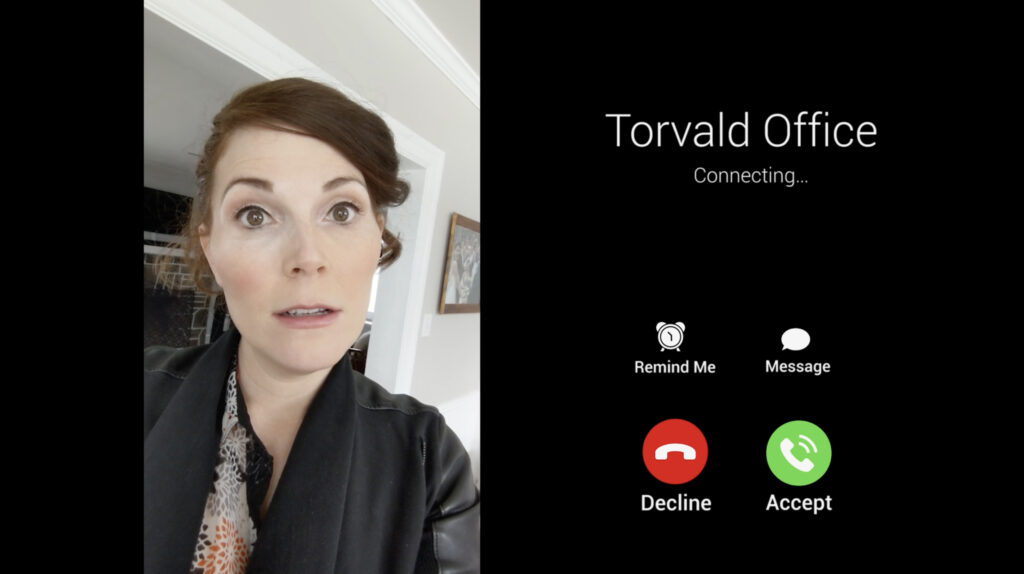 Phindie: What inspired this idea?

Kyle Cassidy: It was on our schedule for 2020 to do A Doll’s House in one of Philadelphia’s historic houses with Jessica DalCanton playing Nora and Jenn playing Christine. They were in Hedda Gabler together and Jenn played Nora back in 2013 and she’d always wanted to do it again with that casting. And when COVID happened we knew that just wasn’t happening.

Jennifer Summerfield: When quarantine began, Jess formed a weekly reading group via Zoom with several friends. We would choose a different play to read, or sometimes just read selections from novels and poetry compilations. It was a wonderful way to stay in touch with fellow actors and keep brilliant thoughts and words in our mouths as the world fell apart around us. I had thought A Doll’s House would be a nice choice, since we wouldn’t be doing the production we had planned any time soon.

I had played Nora several years ago and was intrigued by the role of her friend, Christine, and I knew Jess would be perfect as Nora. But every time I sat down to edit the Victorian script for a pared-down zoom reading, I thought “oh… will anyone care about Ibsen’s little Skylark at this moment in time, with so many serious social and life or death issues before us?” I allowed myself to become discouraged and put it aside. That’s when Kyle, who always thinks outside the box, said “We’ll adapt it for the modern world, quarantine and all.” I have to admit, I was skeptical at first… but the play, about a woman straddling two eras, leaving behind the constraints of one for the unknown of the other, lent itself perfectly to being transported to 2020.

Phindie: What do you think makes Doll’s House especially suited to this kind of production?

Jennifer Summerfield: Ibsen wrote extremely intimate, character-driven, small-cast plays. Most of the scenes are two-character exchanges, and that kind of simplicity really suits this Zoom-like format. It’s about people connecting with each other, looking for change and growth in the other. When we had the first read-through, I cried, because I’d missed that kind of actor-to-actor connection. Kyle added some really great humor into this version, referencing things that everyone who’s experienced 2020 in lockdown can relate to.

Kyle Cassidy: In A Doll’s House you have all these people that were very useful during COVID, you have a widow, you have a doctor…. The play is all about people visiting, everybody’s dropping in to see Nora for short periods of time which is kind of exactly what we’re doing on Zoom. So there really, I don’t think, was even an “ah-ha!” moment, it all just seemed obvious from the very start. Then it was just a question of finishing the adaptation.

Phindie: How much did you have to adapt the script?

Kyle Cassidy: It’s very adapted, but very adaptable, if that makes any sense. Everything’s changed but all the underlying themes are right there. Everything that’s happening in Ibsen’s play in 1878 is still happening now and it still happens during lockdown. The big thing, I think, was figuring out a way that all the actors could act without being in the same room. We’ve seen a lot of plays in the last year that we see on Zoom because the theaters are closed but I haven’t seen any that are set in Zoom, so everybody has a reason to be right where they are. And from there, another big hurdle was how to actually not film it on Zoom, because Zoom has terrible video quality.

So it’s actually shot in HD and then we invented a fake Zoom-like interface called Bubble to set the play in. Bubble does all these cool things that Zoom doesn’t do that help move the play along. Ibsen has a bunch of extra characters who don’t spend a whole lot of time driving the story — there’s a nanny, and a maid, a porter who carries in a Christmas tree, and three kids running around — getting rid of them was pretty easy.

Phindie: How was this project different to the in-person plays you’ve put on? What were the challenges?

Jennifer Summerfield: In theatrical projects, we’re looking at the production as a whole, knowing the audience’s eye will wander over the space and notice different details depending on where they’re sitting or how many times they’ve seen the production. This, by necessity, was much more like a film shoot, where the viewer’s eye is focused on the actors’ faces. We wanted this to be a familiar setting for people who have lived through the pandemic and zillions of Zoom meetings, but we also wanted to avoid the Zoom issue of never quite making eye contact with each other. It was important to us to have the viewer be drawn in and feel a connection with the characters. So, we rehearsed on zoom, and had a Zoom window open on our computers when we shot, but we actually filmed on a separate device for better sound and image quality.

As an actor, this was one of the challenges, because we never actually looked at each other as we performed; we were looking into a blank camera lens, listening to each other on Zoom, hoping we were reacting to each other appropriately. So much of what we do as actors is based on the things that aren’t said… on body language, visual cues, so it was an interesting handicap to not have access to that. Then, in blind faith, we uploaded our individual footage to a shared folder, and the editor, Anna, put it all beautifully together.

Kyle Cassidy: I think there were actually more opportunities than challenges. One of which is that theater was really clobbered by COVID-19 which meant that everybody was starting from scratch and I think that leveled the playing field a bit. Another thing was just that it takes less time because you’re not traveling to and from a theater for rehearsal, you don’t have to find a theater, and you don’t have nearly as much blocking to do. It’s also set now rather than during the time when Ibsen was writing. When we did Hedda Gabler we spent thousands of dollars on period costumes and props, we rented a venue, we had to worry about parking, and where to keep our props and costumes between performances. All that went away doing this. And also because we were filming it rather than performing live it meant that we could just do as many takes as we needed until the actors got it right, so I think they didn’t have to be as familiar with the text as they would if you were sending people out on stage in front of an audience. If they dropped a line we could just stop and back up. 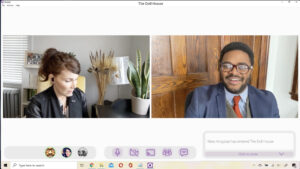 Phindie: How did you choose your actors and other collaborators?

Jennifer Summerfield: I love casting shows. It’s the kind of puzzle I like, finding talented people who are also really fun to spend time with. I knew from the beginning that Jessica had to be Nora and that Carl Granieri had to be in it. He played Dr. Rank in the 2013 version that Josh Hitchens directed and he is an Ibsen dream. Krogstad took some serious thought because we wanted him to be sympathetic, for the audience to be able to relate to the situation in which he finds himself and understand how he could be driven to this point in his life. I had worked with Newton Buchanan at Curio Theatre years ago and he always brings such complexity to his roles, a humor and depth that Krogstad needs. Both Jess and I love Kevin Bergen’s work and he had me in tears from the first reading. He just had an innate understanding of the role of Dr. Rank. We are so lucky to have this cast.

Kyle Cassidy: Anna Gamarnik is an award-winning red-carpet walking filmmaker. I’d seen one of her shorts, Spaced Out, about a strange girl who turns out to be an alien, stranded on Earth which meant that she was obviously weird enough to join this crew and I’d also seen a graphic display she’d done for an industrial film and I knew that Doll’s House was going to have a really graphics-intense editing because we needed to invent the teleconferencing system that it was going to be seen through. I called her and she basically said “I’m doing 16 things right now and I’m not getting to bed until 4 am, so yes.”

Jo Beth Young I found on Twitter when her last album Strangers was being crowdfunded. I backed it and it was really spectacular. During the time that we were filming I was just listening to her album on repeat and just thought it was one of those “she can’t say no if you don’t ask” situations, so I emailed and sent her some clips from the film. She said yes and then basically wrote the entire soundtrack in like four very intense days. And right as we were about to lock the cut I said “I kind of wish that bit at the end had words” and she was like “give me three hours” and boom, it turned into this amazing song custom written for that very second of time.

Phindie: What are you most looking forward to when theaters reopen?

Jennifer Summerfield: The audience. Definitely the audience. I miss the energy, I miss my sweaty, opening night palms, I miss the lights dimming. I even miss the audience coughing… though I don’t think I’ll ever be able to hear someone cough in a theater again without fleeing in terror.

Kyle Cassidy: I dunno. I kind of like this. I know Jen wants to get back in front of live audiences but I really like directing in my pajamas.

A Doll’s House is available for streaming March 23–April 9, 2021. Purchase tickets here to get access to the show for the whole two-week period.