I’ve never acted, except for a brief cameo in a high school musical on which I was working back stage. I have never studied acting, or playwriting, or plays (again, except in high school English). I had a series of short plays produced a few years ago, but with few exceptions I have never been involved in a playhouse in any way. But I love the theatre; I love to go to see plays. My father acted in community plays when I was a child and my mother took me to see childrens plays and the occasional Shakespeare production. I have lived in Philadelphia for most of the last 15 years, and although I do make a point of seeing a production on my odd trips to London or New York, most of my play watching takes place in Philly. 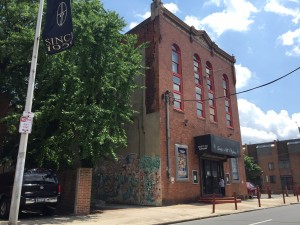 Philadelphia has some excellent playhouses and actors. The Walnut Street Theatre is the oldest extant playhouse in the United States. The Avenue of the Arts is home to the Suzanne Roberts Theatre of the Philadelphia Theatre Company, the Wilma Theater, and the Kimmel Center. Smaller playhouses such as the Arden Theatre, the Adrienne, the Society Hill Playhouse, and the Philadelphia Shakespeare Theatre offer excellent fare. Outside Center City Philadelphia, professional and community theaters such as Act II Playhouse in Ambler, the Hedgerow Theatre in Media, the Walking Fish Theatre in Fishtown, and the Old Academy Players in East Falls, add flavor to local acting scene. Excellent production companies such as InterAct, the Lantern Theatre Company, Theatre Exile, 1812 Productions, and BCKSEET produce consistent and innovative work. Each year, the Live Arts Festival & Philly Fringe brings a host of unique and wonderful offerings to spaces across the city.

I’ve seen shows at all these venues and by all these companies and will continue to do so. My interest lies chiefly in drama, with the occasional comedy and rare musical. Shakespeare is my lodestone. Favorite recent shows include “Rosenkrantz and Guildenstern Are Dead” at the Arden, BCKSEET’s “The Kiss of the Spider Woman” at the Society Hill Playhouse, and the Lantern’s “Hamlet.”

I go to see about one play a month. I hope to use this site to promote the Philly plays, companies, and actors which catch my eye; and to critique the productions that I attend. Of course, there will likely be a flurry of activity in its early existence, petering out as my focus drifts. So it is.