So croons Mick Jagger in one of many needle drops in Once Upon A Time…In Hollywood. The song kicks in during a dreamy closeup on the face of Sharon Tate (Margot Robbie) just as a title card indicates the date of August 8, 1969…the day before she and a handful of houseguests were slain by members of the Manson Family. It’s at this moment that we are primed to take a deep breath and consider the dread which hangs over the duration of Tarantino’s latest epic. We know her time is short, and through Robbie’s eyes we see Tate’s doomed idealism. This is made doubly heartbreaking by Tate’s function in the film up to this point. For the most part, all we’ve seen her do is enter the movie theater to see The Wrecking Crew , a picture in which she co-starred with Dean Martin. Her purity is felt as she dons comically large owl eye glasses and quietly basks in the audience’s reactions to her performance. It’s sweet, but the dread is palpable. Bittersweet is the word… 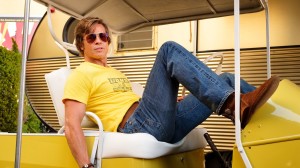 Such is the nature of the Hollywood dream. Countless souls make the trek out west to “make it” in the biz, and very few ultimately succeed. Those who do make it often end up struggling to maintain their status, as is the case with Rick Dalton (Leonardo DiCaprio). For poor souls like Tate, image maintenance is unfortunately never a concern. What it comes down to is this: celebrity is fleeting in any capacity, and the fantasy which drives folks to chase stardom is one that casts a long, dark shadow; a shadow often invisible to those starry-eyed dreamers brave enough to court it.

If there’s a main character in this sprawling picture, it’s Rick Dalton, a former 1950s TV cowboy who, after failing to make the jump to the big screen, has been relegated to villain roles on a variety of shows. For Rick, this is a thankless task emblematic of his decline as a leading man. He’s no longer a smooth-faced hunk. He’s middle aged and it shows. This is all exacerbated by his predilection for the drink. While Dalton is a cool cat in front of the camera, after hours he’s a sweaty, shaky mess. He spends pretty much all of his free time hanging out with his stuntman Cliff Booth (Brad Pitt). Booth is a sort of real-life version of the leading men Dalton used to play. He’s a confident, cool cat, always with a cigarette dangling from his boyish smirk. To hear Dalton say it, you can pretty much do anything to Booth without hurting him. As demonstrated throughout the film, this turns out to be true in both a physical and emotional sense. He’s unshakeable.

But as skilled and durable of a stuntman as he may be, Booth hardly ever works in his trade anymore. This is partly due to Dalton’s waning draw as an action star, but also due to a checkered past of his own. People simply do not want to work with Booth, so he mostly functions as Dalton’s gopher, his chauffeur, and his drinking buddy. He’s also Dalton’s biggest advocate. When a colorful producer (Al Pacino) offers Dalton a gig doing spaghetti westerns, it’s Booth who convinces him it might not be the worst thing in the world. Meanwhile, the two friends can’t help but be starstruck by the “new” Hollywood stars that have moved in next door, namely Roman Polanski and Sharon Tate.

Don’t let the trailers fool you. This isn’t a high-paced true crime story, but rather a leisurely hangout flick which allows Tarantino the chance to play around in his favorite sandbox. From prolonged shots of folks driving around tinseltown to the songs of the era, to a stunning transition from day to night that treats the viewer to a cavalcade of neon signs illuminating iconic film nerd landmarks, Tarantino relishes in taking his time. He’s never been one to turn in a short film, but usually there’s so much going on that the runtime is justified. Here, the dialogue isn’t packed wall-to-wall, nor does the plot make such length a requirement. Yet the pace at which the auteur moseys through the story is perhaps the film’s greatest strength. And with Robert Richardson’s sunny cinematography on display, there’s no need to rush. The film looks exquisite in every moment. Doubly so if you can catch it in 35mm (you should!!!!). As a man with a very impatient bladder, 161 minutes is typically a tall order for me. In this case, I didn’t feel the length one bit.

Simply put, I never wanted it to end.

Great fun is had with the easy chemistry between DiCaprio and Pitt. The two are hilarious together, even if the duo is borderline codependent. Heck, that’s part of the fun. These aren’t necessarily good dudes, so their self-destructive natures hardly clash with audience ethics. In addition to a series of comical characterizations (a very professional child method actress is a stand out) there are a handful of cutaways to scenes from multiple old-timey television shows and films, all of Tarantino’s invention. Each is like a bite-sized Death Proof , serving to both make us laugh and to exhibit Tarantino’s scholarly knowledge of film in all shapes and forms.

While I’d rather not speak to any of the liberties taken with the real-life events woven into this story, it is fascinating to see how Tarantino deals with the idea of fantasy. The title alone is proof enough that this is meant to be a fairy tale. Yes, it is also an homage to Sergio Leone, but my focus is on the phrase “Once Upon A Time.” As with any fairy tale, the fantasy has a darkness behind it. After this flick has been out for a while and spoilers are no longer a concern, there’s a piece to be written on how this movie handles said darkness, how it contends with the morality of its characters, and how the stories we tell might be even truer than those we live.

Once Upon A Time…In Hollywood is Quentin Tarantino’s ninth feature film, and it’s easily his most personal work. The auteur has long claimed that he’d throw in the towel after ten features, but if he were to pull the plug here and now, it would be extremely appropriate. In studying the dual nature of Hollywood and what it means to the people working within it, Tarantino has entered a state of self-reflection. He once heralded a new age of independent cinema in the early 90s, and while his releases are still an event of sorts within the film world, he’s no longer the hip new thing. He’s nearing 60, and the times are a-changing. Film stock has been replaced by bits and bytes, bona-fide projectionists are few and far between, and the ability to separate art from artist has been rendered nigh impossible by social media. The culture which gave rise to Quentin Tarantino has dissolved almost entirely, and naturally, he’s got to say goodbye. I can’t think of a more heartfelt farewell to the ever-present, ever-changing “good old days” than Once Upon a Time…In Hollywood .

It’s funny to think that we are now even further removed from Reservoir Dogs than Reservoir Dogs was from the film’s that inspired it. Quentin Tarantino, a filmmaker frequently accused of being derivative, has now become his very own influence, and it’s a beautiful thing.

Released in Philadelphia and nationwide on July 26, 2019. 35mm screenings at the PFS Roxy.