Author and actor Alexandra Naughton combines her two loves April 29 with a party for the premier of a new movie, CTRL ALT DEL.

An ILIKENIRVANA production directed by Pirooz Kalayeh, CTRL ALT DEL details four relationships intertwining on a single day in Los Angeles, and how each moves through various issues regarding gender inequality, the misuse of power, and familial pressure, until they shift into something different and unexpected.  The movie premieres at the Balcony at the Trocadero with a poetry reading by Naughton, Amy Saul-Zerby, and P.E. Garcia before the film and a Q&A and live music/dancing after the film.

“I like for screenings to be more than just films,” says director Pirooz Kalayeh. “I like making films that bring together all the things I love: animation, poetry, philosophy, and people. I’m hoping to do these satellite events all over the United States and helping bring together artists, so we can bond on a physical and virtual level, exchange ideas, and make more films.” 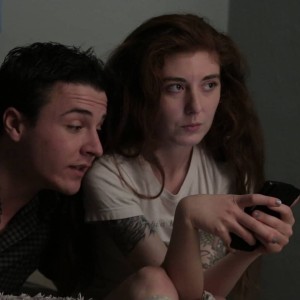 Kalayeh met many of the cast members of CTRL ALT DEL at a premiere of his earlier film Shoplifting from American Apparel in San Francisco.  “I pitched them the idea of doing Brunch on the Fourth of July—an experimental film that would have the main character invite Tom Cruise, the epitome of the American Dream to brunch,” says Kalayeh “They were all down to do it, and we made the film on the Fourth of July in 2014.”

Naughton read poetry at that premiere and she and Kalayeh discussed featuring her in a follow up project. “That’s where the beginning of the film arose,” says Kalayeh. “Then, it became these other stories intertwining with that main story about her.”

“Working on this movie was enjoyable because I was doing things I had never done before, and that is always exciting,” says Naughton. “I was really juiced that Pirooz wanted to work with me in the first place.I have never made a real movie before. I mean, when I was in high-school I was the President of the Amateur Film-making Society and I directed a film called Brick.”

This movie about a day in the life of a brick and the adventure it goes on when it gets picked up from the sidewalk and left in different situations hardly prepared her for professional filmmaking. “It was a lot of fun to write and to produce with my amateur film-making colleagues,” she says. “But I accidentally deleted the finished product from the AV room’s desktop computer when I wasn’t paying attention (I thought it was an earlier version, but no, it was the only digital edit we had).”

Naughton also made her own short poem-films (“I Wish You Never Emailed Me” and “Not A Real Documentary“) and acted in a few films (June Falling Down, Control) but this was her most intense involvement in the process of making a movie. After meeting at the San Francisco premiere, Kalayeh asked Naughton to write a story. Her effort was the basis of her first novel, American Mary, and Kalayeh adapted it into a screenplay for CTRL ALT DEL.

Kalayeh hopes similar serendipity comes about from this premier. “We will be filming the whole event for a documentary about me and my family and all these films I’ve made called Sometimes I Dream in Farsi,” he says. “The event is a premiere, and it’ll also become a major part of the film we share next time, so I’m really excited for Philly to be a part of this, since I grew up in the area.”

“Alexandra is such an amazing writer and performer,” he gushes. “That’s one of the other reasons for having poetry with the film. I really want to showcase all these incredible artists that are creating alongside the film and bring all of us together.”

“I think viewers will enjoy the story being told in the film and the way that we tell the story,” says Naughton. “I love the film. Every time I see Pirooz, we end up watching CTRL ALT DEL at least twice. There’s a lot going on in the movie, there’s a lot to follow. There are a lot of interesting conversations within the film, which is itself visually pleasing. The pacing is perfect: the whole film goes by very quickly in a way that is both satisfying and makes you want more. I’ve shown the film to a few friends, and they all really loved it. Like, really loved it. And my friends aren’t the type to gas me up for no reason.”

She has just one regret: “I kinda wish we had thought to google the title to see if it had been used before,” she laughs. “I’ve learned since that it shares the name with a shitty webcomic series and a few other movies that seem to be about hacking or something. Whatever.”

Enjoy Naughton’s literary and cinematic efforts together April 29, 2018, at the Troc:.alexandranaughton.com/upcoming-events/. Get tickets here: thetroc.com/event/1674930-ctrl-alt-del-film-by-pirooz-philadelphia/