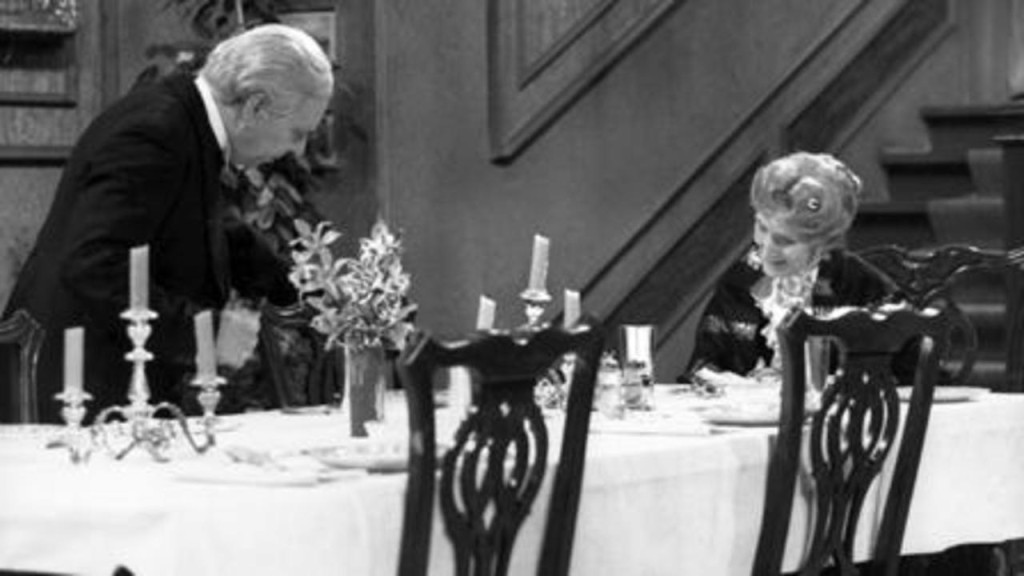 Every two weeks, Stammtisch, the Meet-Up group for German speakers, gets together in various bars and restaurants all over the greater Philadelphia area. At their first meeting after New Year’s, the big topic was Lauri Wylie’s Dinner for One, the short TV adaptation of his quintessential British one-act comedy with a huge international cult following—except Britain and the US.

Despite growing up in Germany, my years of living abroad kept me away from the Dinner phenomenon. After that Stammtisch meeting, I decided to see for myself what could excite millions of people around the world—year after year.

Dinner for One takes us into the mansion of Miss Sophie, a wealthy spinster celebrating her 90th birthday with her four best friends—all of whom, unfortunately, left the party for good many decades earlier. Unperturbed, and hardly allowing this detail to slow down the festivities, it falls upon James, her aging manservant, to play the role of each guest as he serves a classy, four-course dinner, each with a corresponding drink.

Emptying every guests’ glass on each round takes its toll on James, especially as he obliges Sir Toby and his demands for more alcohol throughout the evening. By indulging Sophie’s delusion, he increasingly gets sloshed.

Despite her own constant drinking, Miss Sophie still insists that her butler continue to follow proper etiquette, even going so far as to demand that he salute Admiral von Schneider by clicking his heels and shouting “Skål!” [Swedish for “cheers”] whenever the Admiral receives another drink.

As the evening progresses, Miss Sophie maintains her control and composure, in spite of all the drinks, while James loses command of his physical self and his use of language. He wants to do his best but fails miserably.

The constant emphasis on procedure and pomp, allows this British farce to go beyond costume drama as it shows James, a member of the working-class among the rich and powerful, forced to serve even invisible members of the aristocracy—leading to hilarious scenes, especially at the end when the lady of the house unexpectedly blurs their strict class divisions.

Entrée: The scoop on the playwright and the actors

Born into a theater family and cutting his teeth on stage in the 1890s, Lauri Wylie (1880-1951) penned Dinner for One, also known as The 90th Birthday, during the 1920s. It opened in London’s West End in 1948, and made it to Broadway in 1953. Prior to his success with Dinner, he co-wrote revues and operettas, some with his brother. These include a parody of Gilbert and Sullivan, the reigning kings of popular operettas. He also co-wrote the libretto for Princess Charming, which was filmed and screened in the United States under the title Alexandra.

Actors: Freddie Frinton and May Warden

Freddie Frinton (1909-1968) was an English comedian who performed in music halls and, later, on television. Born Frederick Bittiner Coo, an illegitimate child, he was raised by foster parents. He began his comedy career in a fish processing plant. Apparently, he spent too much time there entertaining the workers with parodies and jokes. As a result, he was fired—his comedic baptism by fire. After some modest success in the theater world, he renamed himself Freddie Frinton.

Frinton served as a British troop adviser during World War II and refused to do the sketch in German. However, he agreed to perform it in Germany, not realizing that the televised program would make him an international star.

May Warden (1891-1978) was an English actress and comedian. She became Frinton’s partner in crime as the Dinner’sancient Miss Sophie—a role that, together with Frinton, made her well-known around the world. Apart from non-speaking roles in Stanley Kubrick’s A Clockwork Orange and the Doctor Who serial The Daleks’ Master Plan, she also played Billy’s vocal grandmother in the TV series Billy Liar.

Thanks to an off-chance visit to a performance of Dinner for One in 1962, starring Frinton and Warden in Blackpool, German entertainer Peter Frankenfeld and director Heinz Dunkhase immediately saw the potential of this play for their audience back home.

A year later, Norddeutscher Rundfunk (North German Radio and TV, or NDR) recorded the sketch in front of a live studio audience at Theater am Besenbinderhof in Frankfurt a.M. on July 8, 1963. They filmed the single-take black-and-white recording with Warden and Frinton in 18 minutes.

Although most films in Continental Europe are dubbed into the vernacular, this sketch is shown in the original English without dubbing or subtitles, because it contains just a few lines that are easy to understand, especially as the film leans on a lot of physical humor. As a result, Dinner for One has the distinction of being one of the few German television shows unsynchronized in English.

Dinner was shown on television occasionally, but attracted such a large following that it became a permanent feature, starting on New Year’s Eve 1972. From there, it entered the Guinness Book of World Records as “the most frequently repeated TV program ever.” NDR added a colorized version in 1999, and some countries will even replay it during Mardi Gras or Carnival.

In addition, the original Dinner has been rehashed in thousands of parodies, often using local dialects, including a Norwegian punk version. Even politicians were not spared, for example, in a satire featuring former French president Nicolas Sarkozy serving German Chancellor Angela Merkel. With a twinkle, she acknowledged that satire in her 2012 New Year’s address.

In 2016, Netflix treated its audience to an unusual Dinner, with a parody featuring characters and actors from American shows, including Better Call Saul, House of Cards, Narcos, and Orange is the New Black. 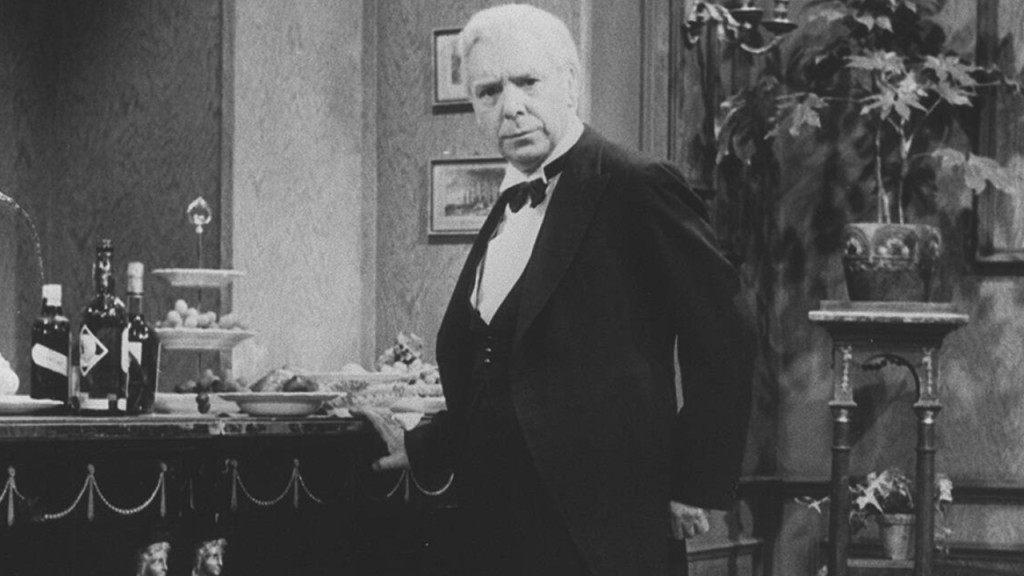 The crucial exchange between the only living members of the party—the old dame and her ever so faithful servant—has become almost iconic, so much so that people all over Europe repeat it as a joke:

Miss Sophie: The same procedure as every year, James!

This dialogue reminds me of the many surreal plays of Philadelphia’s Idiopathic Ridiculopathy Consortium (IRC), based on this part of their mission statement: “We bring good nothingness to life.” I wonder if IRC’s director, Tina Brock, would be willing to perform Dinner for One as an annual New Year’s event— at a theater where we drink more champagne than is good for us. 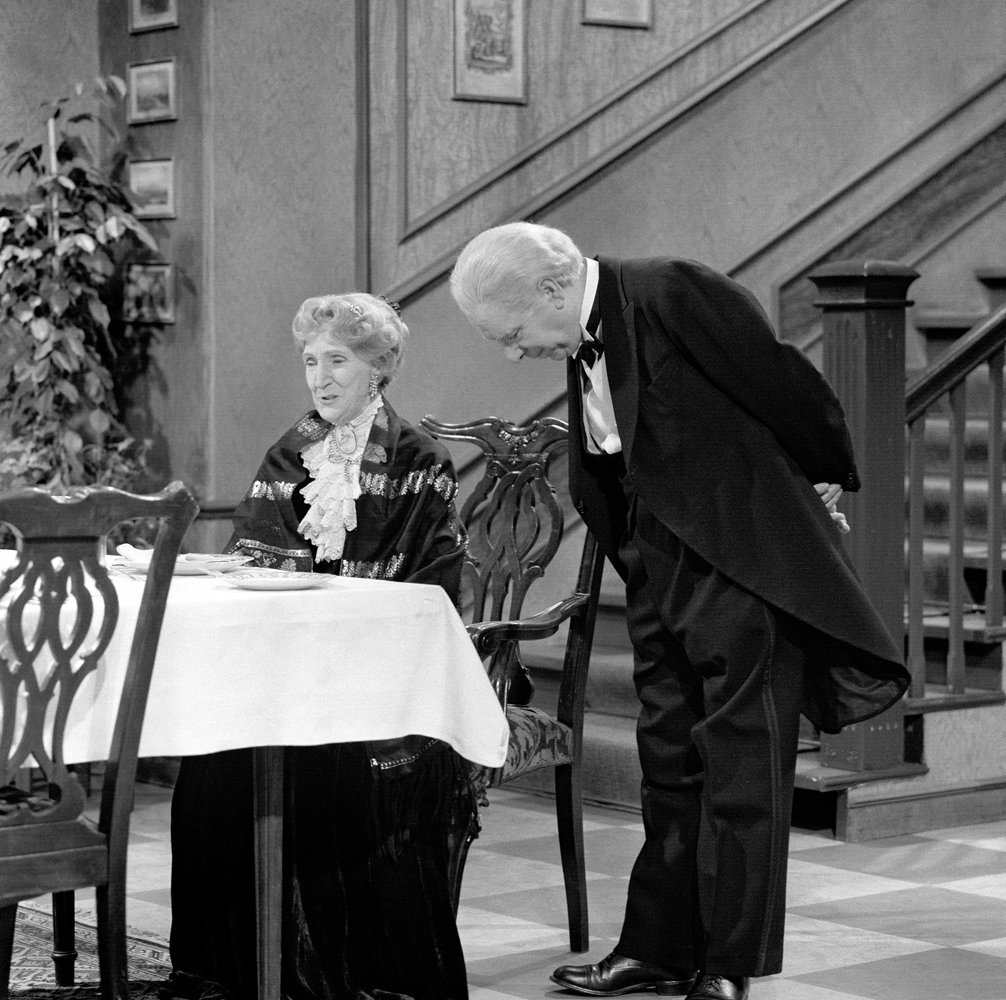 Although Dinner is broadcast regularly on New Year’s Eve all over Europe–including Germany, Austria, Switzerland, Scandinavia, the Netherlands, even Estonia, as well as Australia and South Africa–hardly anyone in Britain, the US, or Canada has seen this short film. The result has been an occasional comedy of errors when German tourists quote the punchlines to unsuspecting Brits, only to have the latter wonder what in the world these Continentals are talking about.

After watching the famous movie, one lingering question hit my brain: why didthis film never take off in England or the States the same way it had elsewhere? Although its absurdist humor and physical comedy seem tailor-made for the Monty Python set, Dinner for One has spent much of its life as an obscure oddball among most native English speakers.

Theories as to why stem from its runtime (at 18 minutes, it’s a poor fit for the US television format) to the usual excuse of copyright distribution.  Another reason could be this confession from an American friend, “We are cultural philistines and often don’t like anything that is not American.”

However, things may change. Take the popular Monty Python series, a famously British troupe that nevertheless filmed at least one season for German television—unavailable to U.K. and U.S. audiences until many years later. Maybe it will simply take time before audiences in North America will find it amusing to watch the antics of a British odd couple on an annual basis.

A mint or a toothpick: What do you think?

The movie certainly deserves wider recognition. Luckily, the advent of the Internet has made finding these lost gems far easier than ever before. Now may be the perfect time for Dinner to finally cross the Atlantic.

However, given the vagaries of public taste, we may have to poke around in the Anglo American psyche a bit to find out what’s holding back US support for one of the most popular New Year’s events, almost as famous as AuldLang Syne.

So, treat yourself to a classic Dinner for One and discover what the rest of the world has already found.

10 Replies to “Dinner for One: The greatest cult film you’ve never heard of”