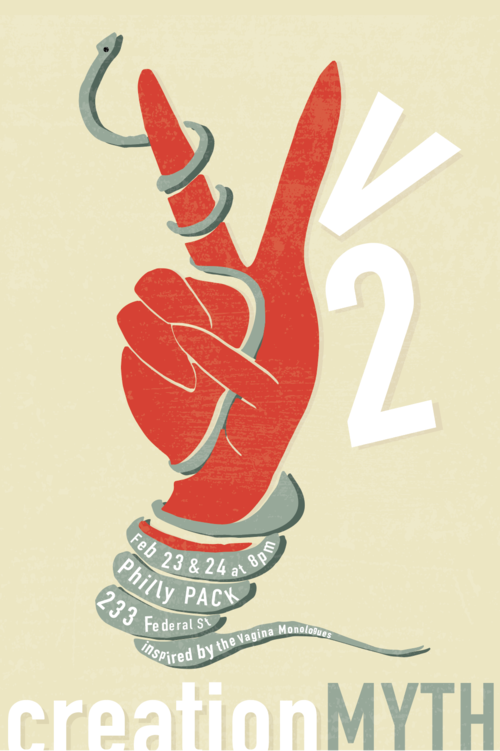 It’s been 20 years since Eve Ensler’s The Vagina Monologues premiered on Broadway. In 1997, the play broke ground by giving voice to women speaking candidly about their bodies and experiences.

Producer and director Lauren Leonard of Earlie Bird Productions put on a sold-out one-night performance of Ensler’s groundbreaking work last year. This year, however, she’s breaking ground herself with the world premiere of Earlie Bird’s debut production, V2: Creation Myth, which follows up and updated the themes from The Vagina Monologues.

“I had originally intended to stage another production of the Vagina Monologues with a few additional original pieces layered in,” says Leonard. “But during the listening and discussion sessions with a diverse array of women, it became clear that we had enough material for an entire original production.”

V2: Creation Myth continues the conversation of what it is to be a woman in the age of Trump, as experienced by a group of professional women. Part memoir, part composite experience culled from interviews and listening sessions, this staged reading voiced by non-professional performers will cover topics such as sexuality, white privilege and complicity, motherhood, race, assault, aging, work, and more—culminating in an end piece that embodies a new vision of female solidarity and power in America.

“Not unexpectedly in the wake of 2016 presidential election and the #MeToo movement, women have a lot to say right now,” says Leonard. “It’s clear we have a long way to go to combat the pervasive misogyny in our culture, the brunt of which is borne by the women who have the fewest resources to combat it.”

V2: Creation Myth was written collaboratively by Heather Shayne Blakeslee, Angie Chilcoat, Bianca Davies, Amanda Jacobs, Grant Leonard, Lauren Leonard, and Susana Mayer. Leonard’s production of The Vagina Monologues in 2017 was performed by much of the same cast. While some of the pieces are memoir performed by the women who wrote them, many others delve into composite experiences pulled together after many listening sessions and interviews with a diverse array of women. Blakeslee, the former editor of Grid magazine in Philadelphia was tasked with weaving the pieces together into a collective whole.

“When the pieces came in from the group, the thing that was most striking was the elemental language that characterized a lot of the content,” she says. “Separately, we went back to the beginning—to waves and the ocean. To fire, to our wildness. To breathing. To an overall rootedness in our bodies, no matter our age or race or sexual identity—it’s like everyone knew we had to go back to the beginning in order to make a new start. We need to create a new narrative where women have power not only over their own bodies, but over our relationships with one another and our society as a whole.”

Performances of V2: Creation Myth will be held February 23 and 24 at Philly PACK in South Philadelphia. A portion of the proceeds from the production will benefit Planned Parenthood Southeastern Pennsylvania and the Women’s Community Revitalization Project, a Philadelphia-based organization committed to social and economic equity for women and their families living on low incomes.

“I think we are also still shocked that so many white women voted for Donald Trump, and for Senate candidate Roy Moore, both of whom have been accused of sexual assault,” says Leonard. “That theme of complicitness is one that we couldn’t ignore as we put the show together. My hope is that V2: Creation Myth will shine a light on our collective experience as women, and to add to the chorus right now that is calling for more solidarity among women. We have to create a new future where we’re supporting one another.”