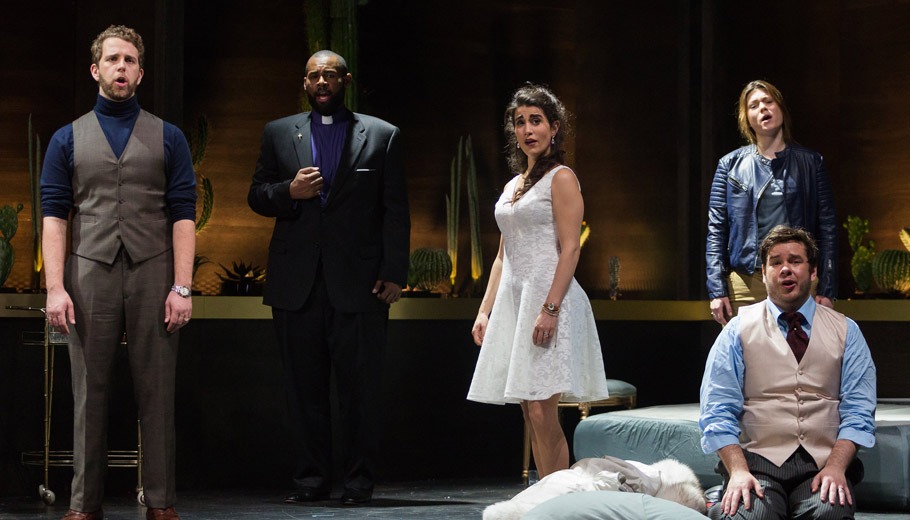 Puccini’s 1917 opera LA RONDINE (The Swallow) is a meltingly beautiful love story that contains some of his catchiest music. It notably introduced the famous aria “Chi il bel sogno di Doretta,” which every soprano from Maria Callas to Anna Netrebko has recorded at one point or another. So why has it remained one of the least produced titles in this famous composer’s catalogue? Stephanie Havey’s occasionally lovely but often maddening production for Curtis Opera Theatre offers a few explanations.

Vienna’s leading operetta house, the Carltheater, commissioned Puccini in 1913, in the hopes that his popular brand of Italianate verismo would translate to the particular constraints of operetta. He never delivered that operetta, and after the onset of World War I, the project was officially scrapped. What would have been the resulting operetta became LA RONDINE, which premiered in Monte Carlo.

LA RONDINE does retain some of the conventions of operetta, such as the presence of two couples—one leading, one supporting—both written for soprano and tenor. There is also a very small amount of spoken dialogue. The opera ends without a death, but one could not possibly describe the denouement as happy: Magda, a courtesan who rejects her pampered life to chase true love with the young and idealistic Ruggiero, returns to her wealthy lover, unwilling to yoke her well-bred beloved to an unworthy fallen woman.

This ending evokes Act II of Verdi’s La Traviata, when Violetta acquiesces to a request by her lover’s father to abandon her son, lest their relationship tarnish the marriage prospects of his other child. But LA RONDINE has none of the dramatic stakes that have made Verdi’s masterpiece an enduring classic; quite the opposite, actually. Everything seems to happen easily and fortuitously in Puccini’s opera. When Magda informs her keeper, Rambaldo, that she is leaving him, he relinquishes her without a fight. And one gets the sense that both Ruggiero and Magda will survive the momentary sadness that surrounds their uncoupling. The audience is left wondering whether the three acts of pretty music they have just heard was worth enduring such a relatively sedate evening.

Havey’s production smartly updates the setting to the 1950s, which works especially well for the first act, which is set in Rambaldo’s Paris mansion. The cast and chorus look smart in empire-waist dresses and checked suits, with ever-present cigarettes and martini glasses. But the intelligence of the production immediately fades when the curtain rises on Act II, and the Paris bistro where Magda and Ruggiero have their first assignation has been transformed into a beachside café, complete with Frankie Avalon and Annette Funicello doppelgangers doing the hully-gully. Are we supposed to believe that Magda has already run away to the French Riviera, where Act III is set? Then how did she get their so quickly from Paris? And if she and Ruggiero were coming from an evening salon at her home, why is it so sunny? The questions keep coming throughout Act III, which does little to mitigate the static nature that surrounds the ending’s inevitability.

If the production boggled the mind, at least there were musical virtues to savor. These primarily came from the pit, where conductor Kensho Watanabe—an alumni of Curtis’s conducting fellowship, who recently made a splash subbing for Yannick Nezet-Seguin at the Philadelphia Orchestra—perfectly accentuated the lush lyricism of Puccini’s score. The players of the pit were small in number, but under Watanabe’s precise yet passionate directorship, they produced enveloping waves of sound that rivaled orchestras twice their size.

On stage, the evening’s one unqualified triumph belonged to soprano Emily Pogoreic, who brought a clean, virtuosic voice and sparkling Italian diction to the role of Lisette, Madga’s upwardly mobile maid. Watching her, one got the sense of an artist emerging more of less fully formed and ready for larger stages. Would that the same could be said for Elena Perroni, who sounded overparted as Magda and acted with puzzling passivity.

Ruggiero was sung by Jamez McCorkle, who recently changed his fach from baritone to tenor. This switch seemed apparent when his high notes appeared to require extra coaxing; other than that, he sang with vigor and warmth. As Prunier, the nerdy poet who becomes Lisette’s lover (and adversary), tenor Aaron Crouch’s ringing tenor easily filled the intimate Perelman Theater, never sacrificing style or connection to the text for the sake of volume. Turkish baritone Dogukan Kuran made the most of Rambaldo, although he was not consistently audible when singing over the orchestra. Tiffany Townsend stood out among the supporting cast; I hope to hear her limpid soprano again in a larger role.

LA RONDINE is an opera without a clearly defined identity, which largely accounts for its absence as a major repertory player. Despite some strengths, Curtis Opera Theatre’s production does little to suggest its status as a neglected classic.