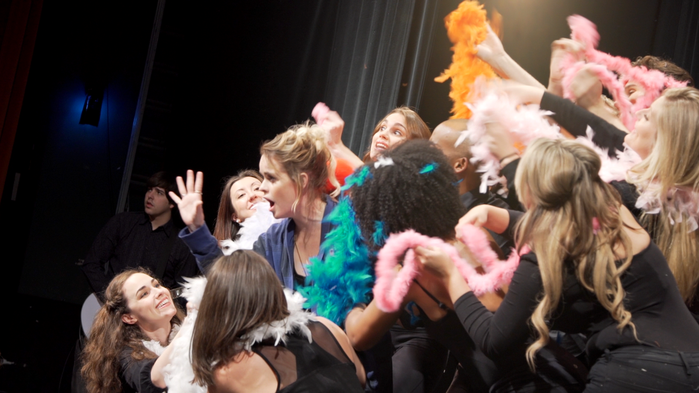 “Loving the things that drive you absolutely insane, isn’t that something?” This question, posed halfway through the mockumentary-style film, encapsulates why despite the infinite stressors of creating art, people hinge their entire livelihood on it. A fitting addition to the Fringe, HAPPY YUMMY CHICKEN lovingly satirizes theater and those who devote their lives to it. Two men—Brody (Brandon Monokian, who also wrote the film) and Matthew (Erik Ransom)—have been given a grant to produce a new musical adapting the “true” story of a New Jersey woman named Marilyn (Ashley Biel), who, after being broken up with by her boyfriend “of six weeks,” spends two months eating continuously in a chicken restaurant named Happy Yummy Chicken. And you thought some of the premises of the Fringe shows this season were weird. Fans of Netflix series Orange Is The New Black will recognize three cast members: Taryn Manning, playing the eccentric bed-and-breakfast owner Laura; Diane Guerrero, a.k.a. Cheryl Davis, a news reporter desperately trying to force Marilyn to give her a proper interview; and Emma Myles, portraying Geraldine, the owner of Happy Yummy Chicken.

Director Anna Loyd Bradshaw has taken a leaf out of Christopher Guest’s book, finding authenticity through delightful awkwardness and simplicity. The musical within the mockumentary, also called Happy Yummy Chicken, twists Marilyn’s tale of oddly-earned celebrity into an inspiring, effervescent pump-up show about embracing life and living one’s truth. HYC director Sarah De Casserole (Suzzanne Douglas, and no, her character’s name is not exactly pronounced the way you think it is) believes firmly in the message of her show and leads her eccentric cast and crew through an absurdly pretentious and silly rehearsal process that will hit close to home with anyone who has ever worked in theater.