Is it an insightful look at love, a not-to-be-taken-seriously farce, or a workable anachronism of misogyny? The Taming of the Shrew continues to divide critics and perplex directors. Fringe practitioners Tommy Riordon and Phil Cerroni of Margo Jones Syndicate look at it through beer-colored lenses and see a loving partnership featuring a strong independent woman. They share their convincing argument with Phindie ahead of this festival’s Shakespeare @ the Bar: The Taming of the Shrew. [City Tap House, 3925 Walnut Street] September 11, 2016; fringearts.com/shakespearebar. 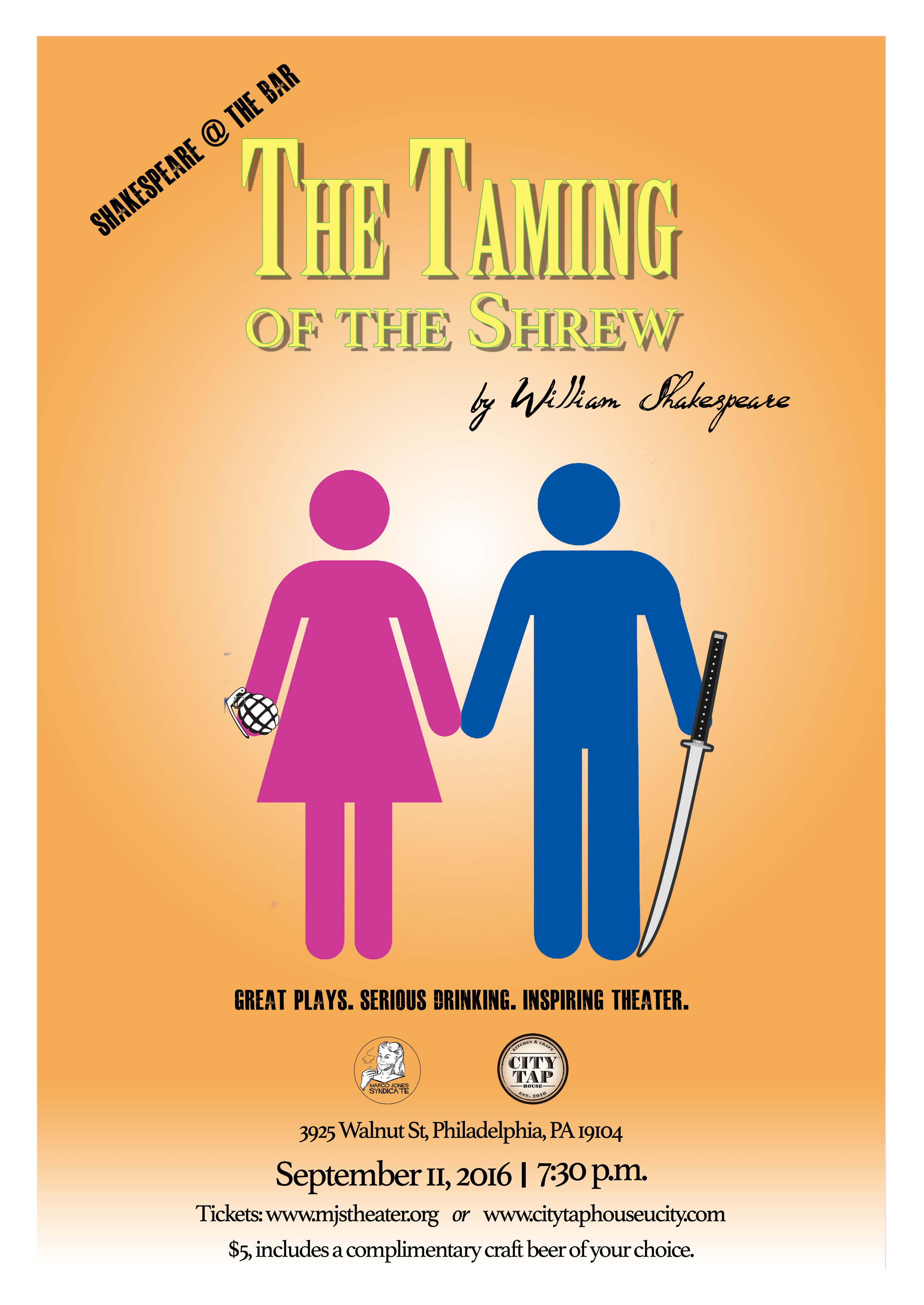 Phindie: Why did you want to do TAMING?

Tommy Riordon and Phil Cerroni: So, at the risk of sounding like opportunistic and low-rent, we initially landed on Taming because we didn’t have the money to rent a venue for the show we intended to perform for the Fringe—people always romanticize the starving artists, and far too little attention is paid to the starving producer!

Those logistical considerations aside, we are huge fans of the Shakespeare in the Bar format—take a look at some of the work Dylan Key has been doing in Dallas, as well as the Back Room Shakespeare Project in Chicago—and thought this play was a perfect fit for a fringe festival. Add on top the fact that Shakespeare originally performed his work for drunk people in 16th-century inns (read bars), and it’s a dream come true. Lots of scholars and artists argue over what Shakespeare meant to portray in his plays. At best, we can make educated guesses. However, we know how he produced his shows. So really, not only is it artistically exciting to hang your art out over the edge in a bar, but it is true to the spirit of his original work.

Phindie: But why this Shakespeare play?

Tommy & Phil: We had already cast the other play and, while we were looking at Shakespeare’s canon, discovered, much to our delight, that the actors we already had fit Taming perfectly. So, besides being broke producers who tricked a cast of talented actors into being in a play they didn’t audition for, why are we doing Taming?

Tommy & Phil: Given our performance location, Taming expresses a pointed commentary on relationships and the interplay between the sexes. Walk into any Philly bar, and you see a microcosm of this play performed every weekend. Additionally, The play is surprisingly controversial, which is kind of exciting. The question of gender relationships between men and women is a touchy subject these days, and we have a treasure trove of relevant material to present in a risky, satisfying way that, hopefully, will make the audience laugh, while simultaneously questioning their preconceptions about what it means to love and be loved.

Phindie: Oh. So how will your approach differ from other productions?

Tommy & Phil: After we decided on Taming we started looking at other productions, specifically at Pennsylvania Shakespeare Festival and the Public Theatre. We noticed that many theaters assume that Taming is an anachronistic portrayal of Elizabethan sentiments where the good woman is ultimately supposed to submit to her man—in a word, sexist. So being contrarian, we asked the simple question, “What if Shakespeare isn’t sexist?” Think about it, he wrote many strong female characters, like Beatrice and Portia. So why would Kate be any different?

We could spend all day talking about how the play upends traditional roles in Commedia and comic tropes that persist into the present, but, when it comes down to it, we think Taming is a story about the partnership between Kate and her lover, one that is fraught with tension and hilarious conflict, to be sure, but a loving partnership nonetheless. More importantly, it is a partnership where, in the end, Kate holds all the cards. This is not the story of a man imposing his arbitrary desires upon his wife. It is the story of two insecure people trying to prove that they are worthy of love.

Phindie: One take on TAMING is that it is Shakespeare is commenting on the compromises and changes we all must make for relationships. We could compare it to Romeo and Juliet, in which he depicts an unrealistic, naive love.

Tommy & Phil: We think it’s not merely that Romeo and Juliet is naive, and Taming is realistic, but more so that the plays explore two different facets of romantic love. Anyone who has been in a committed relationship knows that you have both “the warm and fuzziers” and difficult stretches—relationships take work. Taming is, in part, about commiserating. Kate and Pretruccio suffer together through the bullshit of Kate’s father making her the judas goat for Bianca’s conjugal bliss and no one believing that either of them will find happiness together, much less, amount to anything.

Phindie: What do you like about your Fringe venue?

Tommy & Phil: City Tap House (University City) has beer. Lots of beer. Also, they are willing to take risks. We approached multiple restaurants with this play, and although all of them expressed general interests, CTH was the only one that jumped whole-heartedly into the breach (dear friends).

Also, the rarely performed prologue to Taming establishes that this play is being performed for a drunk who thinks he is a nobleman. So it’s kind of perfect to be performed at a bar. Also, their outdoor patio is virtually purpose-built for theater.

Phindie: What’s your favorite beer on tap there?

Tommy & Phil: Both of us are huge fans of their Habanero Revival. Matriculating in Texas, we have both had extensive experience with various pepper-inspired beers. This is, by far, one of the best!

Phindie: Cheers. Do you have any other picks for this year’s festival?

Tommy & Phil: Hands down, Drowning Ophelia. First of all, it is a hilarious take on the universe of Hamlet. Great play, very funny, and it’ll make you think. Also, this show is transcending their regional festival mantra and has pulled in a real Mench of a director, Dan Roberts, from NYC. Phenomenal artists tackling a phenomenal play. It’s on our calendar.