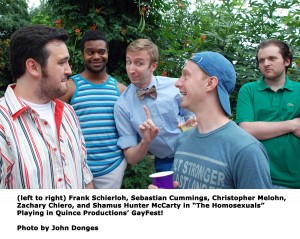 And the festivities continue at GayFest! with Philip Dawkins’s acclaimed play THE HOMOSEXUALS. Gritty and thoughtful, with a broad scope of characterizations and universally relatable themes, THE HOMOSEXUALS presented by Quince Productions, is a great follow-up to his Philadelphia premier, Failure: A Love Story, at Azuka Theatre earlier this year.

Sarah Gafgen’s production at Plays and Players is sweet-tempered and patient, delivering manifold pleasures. The first and most obvious thrill here is the clever, idiosyncratic, and at times raunchy writing. “I’m sweating like a fisted midget” is a notable line from the first scene, mouthed here by Christopher Melohn as Peter, a flamboyant theater director, as he is attempting to wrestle ice skates off of his feet.

In this first scene, Evan (Zachary Chiero), the play’s protagonist, is preparing to break up with Peter, who is about a decade older than him. What follows is a universally relatable experience; Evan, who expected dramatic Peter to make a scene, is the one who ends up crying.

A worldliness and cynicism runs under every interaction in the play. Unfulfilled aspirations and an endless groping for meaning are at the root of the story. Yet THE HOMOSEXUALS is never bleak; Dawkins’s humor stays sassy rather than veering  to the dark and cynical.  Gafgen’s production plays the extremely funny writing  lightly, taking advantage of every punch line and letting the darker sides of the play’s story sink in slowly. During the show the audience’s focus is on the characters and the support that these imperfect friends give to one-another. We think about the deeper issues later.

Gafgen has assembled a fully competent cast to take on Dawkins’ clever, intuitive, at times raunchy script. Melohn grasps the maturity, affection and sensitivity at the core of manic Peter, whose flamboyance could easily be tragically stereotypical in the wrong hands. Katherine Perry brings a hard but loving edge to the buoyantly sad Tam, the perpetually-single “hag” of the group who gave up on a university career to work in the public school system.

The real monster role here is Evan, who is nearly always on stage. Alone among all of his friends, he is apathetic and unengaged with the political and artistic worlds. Like the others, he is self-centered while also being invested in his friends; yet in each chronologically reversed scene he becomes slightly more youthful and naive while listening to his friends rant about politics, love and sex. Every other character in the play seems to fall in love with Evan at some point, and voices enthusiastic tributes to his lovability and attractiveness. This is hard to live up to, especially as we experience the character’s many foibles and failures through the eyes of six other characters. Chiero navigates  these complications with lightness and charm, choosing rightly not to be heavy-handed with the characterization. After all, Evan spends more than half of the play listening attentively to his friends. In the end, the quibble that he fails to portray the universally lovable man advertised here may be a fault of the script rather than the actor; according to some reviewers, this was a problem in the Chicago production as well.

The final pleasure of THE HOMOSEXUALS is watching a masterful scriptwriter’s plotting unfold. Dawkins plots with a nearly scientific naturalism. The play moves backward from 2010 to 2000, and Evan’s personal, feckless search for meaning is paralleled with ten turbulent years of the gay community’s struggle to self-identify. August 10-24, 2013. quinceproductions.com.