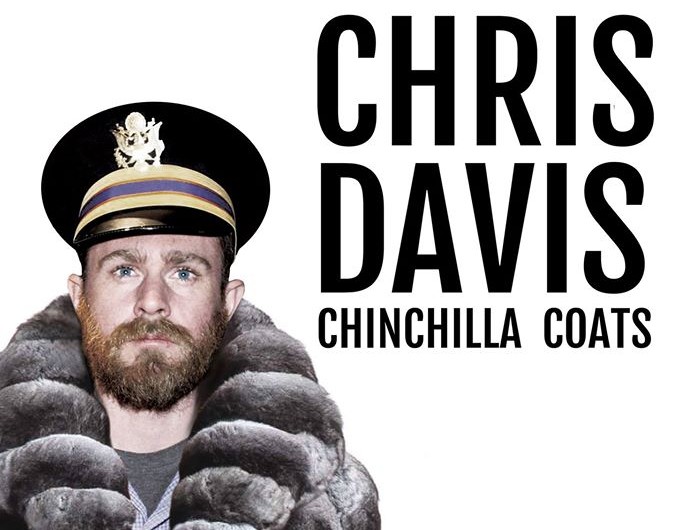 It takes 100 chinchillas to make a chinchilla coat. How you go about getting those chinchillas is a matter of personal taste. For instance, one might bop them on the head, Little Bunny Foo Foo style. Or you can go “old school” and twist their heads right off. This of course is the preferred method of world famous director M. Night Shyamalan, who as it turns out, is stalking Chris Davis.

CHINCHILLA COATS is Philly writer/comic/director Davis’s one-man hour-long salute to comedic self-flagellation—a deranged soliloquy wherein Chris discloses his true nature as a drunken, under-sexed, 34-year-old man-child who carries a “lucky condom” in his front pocket—you know, just in case. Have I mentioned yet that he is in a relationship with his “yellowed” pillow? Her name is Agnes but they aren’t speaking at the moment. What a complicated dude.

Profoundly concerned for his well-being, I reached out to Davis in an effort to understand this troubled young man and his hilarious (albeit disturbing) creation, CHINCHILLA COATS.

According to Chris, CHINCHILLA COATS developed over the course of three years. “I performed in almost every Sunday Best (Berserker Residents’ curated open-mic). Each time I had only one rule and that was that I would always write new material.”

Davis, who got his start in theater at Albright College, admits stand-up was unchartered territory for him at the time. “When I first started I had never done stand-up before. three years later I had … CHINCHILLA COATS.”

Davis’s history on the stage is certainly at play in CHINCHILLA COATS. Props, costumes, and Davis’ dry storytelling approach fuse to form a sort of comedy/theater mash-up. “I have worked in theater so long it blurs the line …. I think it is stand-up, but I’m not even sure what exactly stand-up is, except standing up and talking and trying to make people laugh.”

The future of CHINCHILLA COATS looks bright. A long engagement at Edinburgh Fringe, and the prospects of attracting wider audiences bodes well. Chris, however, remains humbly optimistic. “Edinburgh always shapes and changes your show drastically.  No matter what, you leave the festival with a much stronger show that you can take anywhere.  My hope would be that Kevin Hart sees me in Edinburgh and asks me to go on a world tour as his opener …. Or, people just hire me to perform in a bunch of places.”

Wrapping things up I asked Chris how much of him is actually in the sad, day-drinking, yet charismatic, underdog persona he brings to life in CHINCHILLA COATS. Chris’ response: “Way too much.”