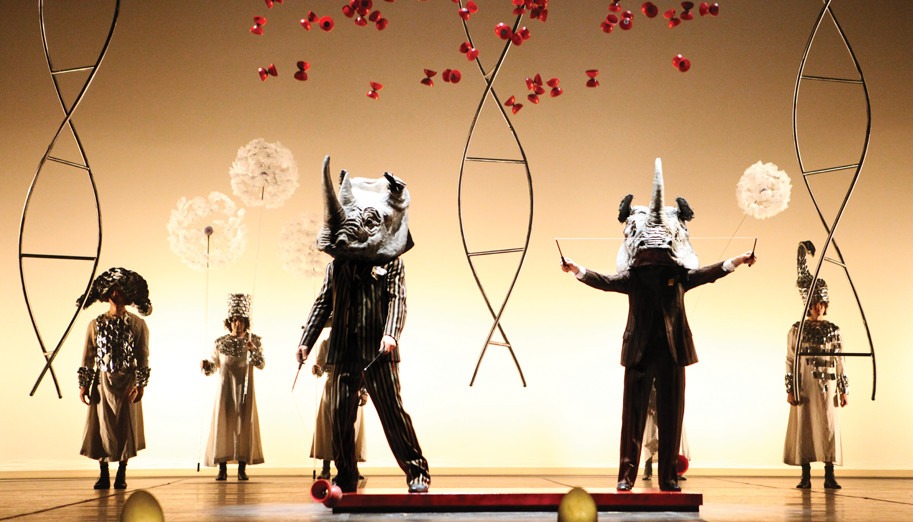 The art piece is enigmatic and eerie. On a huge screen that covers the entire stage, a creature with the body of a man and a head dandelion fluff, and a female with golden hair and a blue cape, face each other on a bleak prairie. Painted for a ballet, “Mad Tristan”, that was premiered in the Metropolitan Opera in New York in 1944, the backdrop looks like a riddle with no correct answer, just like other artworks by Salvador Dalí.

Choreographer Daniele Finzi Pasca, co-founder of Campagnia Finzi Pasca, has created an innovative piece. LA VERITA is a circus-style performance inspired by Dalí’s painting which uses a replica of the original painting as a backdrop.

The performance starts with a good old feather dance by performers in white costumes. However, the dance is not like the usual cabaret show—is it the reality of what dancers are like beneath their charming smiles? There are fights between egoistic dancers to show off and get attention, and a male dancer whose bizarre and comical movements make the viewers giggle.

Then Pasca takes the audience to the weird magical world of the maverick of surrealism; a shadow of a wheelbarrow, a motif in Dali’s painting, zooms in and out on a white screen and pops onto the stage as a male performer in a woman’s black flamenco dress who runs around like a bull. Soldiers march with dandelion-like sticks in their hands. In the midst of exciting juggling, wine corks pour in a shower and ruin everything. The viewers hold their breath watching the thrilling acrobat on aerial silks and a trapeze. The reality on the stage starts to become surreal.

Collaboration between the stage art and other forms of art is nothing new. But when it truly succeeds, the forms interact and inspire each other to create something exciting and unexpected. LA VERITA is inspired and inspiring and goes beyond your expectation and imagination.