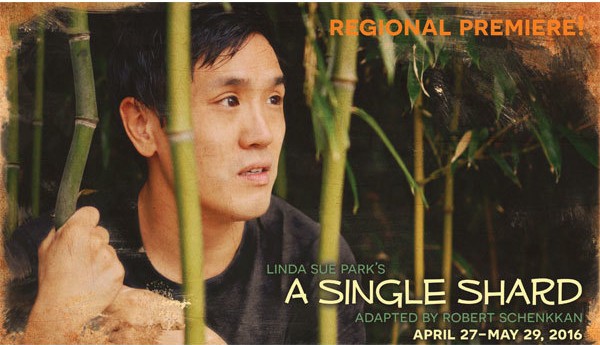 In the 12th century Korean village of Ch’ulp’o, potters are the talk of the town. People’s Light and Theatre Company’s production of A SINGLE SHARD takes Linda Sue Park’s Newberry Award winning novel, adapted for the stage by Robert Schenkkan, and transports the audience to the small village, telling it’s story through dance, an ensemble chorus, and the exuberance of a young homeless boy.

A Single Shard is about a young orphan, Tree-Ear (Brian Lee Huynh). Along with his guardian and friend Crane Man (Graham Smith), he lives beneath a bridge in squalor and spends many a night hungry. Crane Man is a sage father figure who teaches Tree-Ear about ethics and hope and to dream, not in the impossible, but in seemingly improbable dreams that just have yet come to pass. Tree-Ear is a curious adventurer who enjoys sneaking into the Paulownia trees to spy on his favorite potter in the village, Min (Thom Sesma).

From not so afar, Tree-Ear absorbs the mastery of Min and his ability to manipulate the potter’s wheel. One day, Tree-Ear can’t resist and gets a little too close to the potters collection. Catching him, Min thinks he is a thief and a master work is accidentally broken. Tree-Ear offers to work off the loss of the piece and a second parental relationship enters into Tree-Ear’s life. He works his way from being servant to apprentice and just as skillfully earns the affections of the great potter and the potter’s wife, cleverly played by Jeanne Sakata.

This is a coming of age fable and an expression of the hero’s journey. Tree-Ear, named for the mushrooms that grow beneath tall trees, offers to take a great journey carrying Min’s pottery to the village of Songdo, where an emissary to the Emperor had expressed interest in offering a commission for the master potter’s work. Along the way Tree-Ear overcomes tragedy and tremendous struggles in order to take these pieces, in some form, to the emissary. Tree-Ear believes even the smallest piece, a single shard, would express the greatness of Min’s talent.

This beautiful story is told through the eyes of Tree-Ear, spanning time and distance with each sprint across the stage. The naturalistic and minimalist set (David F. Weiner) is designed to inspire the imagination of the audience. Stage left is the bridge home of Tree-Ear and Crane Man; stage right is Min’s modest home and in the center is the hillside with lighting to simulate sunrises and sunsets.

Huynh’s enthusiastic performance carries the show and Smith as Crane Man hits the perfect note to act as a true teacher. The play reaches its most evocative and engaging through the usage of dance as part of the storytelling. This is where the work of director Seema Sueko and movement choreography of Jungwoong Kim seamlessly flow together creating the abstraction and fluidity of an old folk tale. Kim also dances as a fox, deer, and even a vase spinning on a wheel with a style that is both naturally graceful and animalistic. During Tree-Ear’s long journey, the ensemble dances as wind holding him back, giving a visceral effect to the struggle he felt physically and emotionally.

A SINGLE SHARD is a powerful sensory experience that can be likened to listening to an engaging storyteller while staring at the fire, letting its flames create the images and leaving the audience with warmth and hope that matches with the interconnected themes of this production.