Kensington cops may ask why you’re on rundown Ormes Street, but don’t get rattled: the play happening inside the Papermill Theater satisfies like mom’s chicken noodle soup. Normally as a critic, I believe it is unprofessional to focus on anything beyond understanding the content of a play and critiquing how a company executes the material. But Hella Fresh Theater’s two-person show ALP D’HUEZ (starring Jennifer Summerfield and John Rosenberg, directed by Josh Mcllvain) is a special case because: 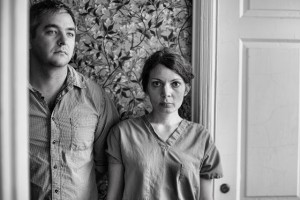 Therefore, its my job as a critic to tell you, Philadelphia: Who cares if there are broken down houses on Ormes Street with unhinged car doors, and kitchen sinks in their front yards? Do not be deterred. Keep walking. The Papermill Theater is the perfect venue because John and his fiancee, Yael, have stripped their theater of all pretense. On the ground floor of a building filled with five floors of artist studio spaces, the Papermill reminds patrons that theater is ephemeral, a work in progress. Come in jeans as you are and grab a beer.

ALP D’HUEZ is set in 2004. Lance Armstrong has just won the Alpe d’Huez stage of the Tour de France, American tourists Evan and Joanne, a husband and wife, are examining the anatomy of their marriage in a Parisian hotel room. When this couple goes to the bathroom they go without exiting or closing a door—this intimate play gets microscopic.

Thirty-seconds into ALP D’HUEZ, I was convinced that Rosenberg is a man who can act as well as he can write. But the play’s scene stealer is Jennifer Summerfield. Rosenberg’s performance is an extension of his organically immediate text, but his words hit Summerfield like baseball bats slamming her in the gut. October 13 to November 4, 2012. thepapermilltheater.com

Previously published by Foley Got Comped.