“At night I wonder how you are feeling, what you think, if you’re happy, if you can sleep. Even when I pray, I wonder what you’re doing. I look up through a window if it’s recess or listen for your steps in the hall. I can only concentrate if I pray about you. Almost to you.”
—Father Rivard in Milan Stitt’s THE RUNNER STUMBLES 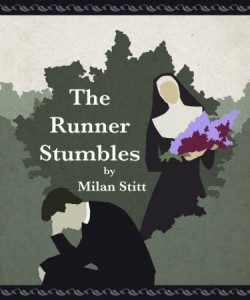 Author Richard Yates has a wonderfully titled short story collection: Eleven Kinds of Loneliness. In a schoolyard, in a TB ward, in a family, in a marriage, in the bed of a beautiful woman, in New York, in Los Angeles, on the French Riviera: to Yates there were as many stories about loneliness and isolation as there were stories. THE RUNNER STUMBLES, now in production by Curio Theatre Company, presents another such tale.

In Milan Stitt’s play, two young people who find themselves together in an isolated community on Michigan’s Upper Peninsula are kept from expressing their burgeoning mutual love by the strictures of Catholicism. Father Rivard (Steve Carpenter) is a priest and Sister Rita (Isa St. Clair) is a nun. When Rita’s bones are discovered in the yard of the rectory five years after she disappeared, Rivard is the prime suspect in her murder. Their relationship is explored in flashbacks as action moves seamlessly from the prison and courtroom to the house they once shared….

Religion is to blame for dooming Rivard and Rita’s love, and though the portrayal of the Catholic Church feels true to life, the presentation of the church’s constraints is unsurprising and too-familiar. But Stitt also recognizes the humanity and universality of the couple’s isolation and longing for love, and Carpenter and St. Clair succeed well in showing this.

They are the center of a strong all-round production. Set designer Paul Kuhn (he also stars as Rivard’s defense lawyer) is surely one of the most imaginative designers at work in Philadelphia, and Curio’s Calvary Chapel space gives him plenty of room to realize his excellent ideas. The first time I saw a play there, a great production of Connor McPherson’s THE WEIR, I thought I was in a small black box theater made into a cosy Irish pub. In last year’s THE TEMPEST, Kuhn spread the action across the cavernous space for a staging both intimate and epic.

Presenting THE RUNNER STUMBLES, Kuhn has opened up the space to reveal the fitting stained-glass windows and built a sloping, tiered set evocative of fading memories, an uphill fight, and our compartmentalized minds. Without drop curtains, the chapel is more suitable for choir music than quiet on-stage banter, but though voices echoed from certain sections of the stage, on opening night every word was clearly audible.

For casting, Curio draws from its own company of actors, with only the occasional outsider. With its limited talent pool, some of the company’s productions have been inconsistently performeded&mdash;square peg actors fitted into round character holes. Not so with THE RUNNER STUMBLES. From the tangible chemistry between Carpenter and St. Clair, to the confident interpretations of the young jailer (Harry Slack) and schoolgirl (Meridian Lowe), every role is well cast and executed.

St. Clair’s Rita is convincing lonely, desperate to be seen as “a person, not a nun who used to be a person.” When Rivard gives the speech at the epigraph of this review, or when he tells Rita “You can’t know me. I’ll destroy you. You can’t know me. You’d hate me. I hate myself.” he sounds like any young lover haunted by love or feeling unworthy of his amour’s affection. That they are kept apart is tragic, but there are many causes of loneliness, and the church is just one. October 11–November 10, 2012, curiotheatre.org.

One Reply to “Divided By Faith: Curio Theatre’s THE RUNNER STUMBLES”