She’s an American tourist on a girls’ holiday, seeking out a romantic, exotic fantasy of Spain. He’s a dashing, seductive Spaniard who takes her to his soon-to-be demolished apartment, where he’s barely even begun to pack. They each have a multitude of secrets that begin bubbling to the surface as what should have been a simple one-night stand turns into a battle of transatlantic politics and prejudices. 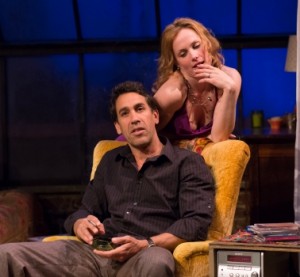 Wohl’s excellent BARCELONA, now playing at People’s Light & Theatre Company as part of a rolling world premiere, is a modest play—two characters, real time, eighty-five minutes with no intermission—but its skill lies in the slow, methodical building of suspense as revelations about this odd couple are first hinted at and then emerge. The conversation turns from light and humorous to tense and foreboding with surprising ease. Questions of fidelity, personal loss and cross-continental conflict arise organically out of the interplay between two people who attempt to mask their wounds with sex, drink and a compost heap of lies. They lie to themselves as much as to each other.

Irene (Julianna Zinkel) has been drinking to party, the very foreignness of her surroundings giving her license to cut loose with her girlfriends and behave impulsively as reality is suspended several time zones away. Manuel (Robert Montano) has been drinking to forget, to drown himself in the present as a means of avoiding confrontation with his troubled past. Zinkel’s manic drunkenness complements Montano’s collected cool (sometimes downright cold) as the two oscillate between sexual attraction and cultural antagonism.

BARCELONA is nothing if not honest about the disparity between what we say and what we think about America and its role in world. As Irene rants about the European disdain for America, her alcohol-soaked observations range from offensive to strangely spot-on. The play is neither pro- nor anti-American so much as it is up-front about our mixed feelings about our country’s past and present. It’s plenty to chew on, and one leaves the theater stricken as much by the geopolitical complexity of it all as by the profound emotional reversals that take place on a personal level. 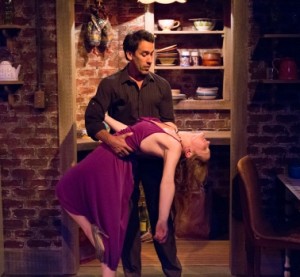 Director Jackson Gay does well to take his time with this material. Long pauses abound in BARCELONA, but the audience never leaves the scene, so strong is the tension between these two. There are lingering glances where the subtext is written in boldface type on the faces of Zinkel and Montano. The lighting of a cigarette accompanied by a far away gaze sometimes says more than dialogue. Lighting designer Joshua Schulman gets to have some fun when the lights go out in Manuel’s apartment, late night turning to early morning as Montano silently lights something like fifty-nine candles onstage.

BARCELONA is a tour de force for its actors and a bold, enthralling triumph for playwright Wohl. There are some pop culture references in the text that will surely date it, but Wohl is talented and prolific enough as a writer (she’s got two screenplays and a musical in the works, plus the upcoming premiere of another new play, American Hero) that she will have no trouble moving on. For the present, BARCELONA gets the job done with honesty, empathy, and brutal, refreshing truth May 29 to June 23, 2013. peopleslight.org